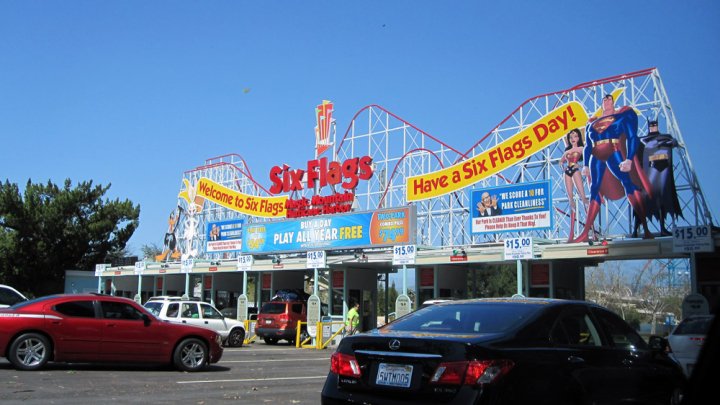 On Saturday, we made a group outing to Six Flags Magic Mountain–my dad and I started off from San Diego proper, we picked up my brother at a park & ride in Oceanside, and then we picked up my dad’s sexy mysterious latin luvvah (as he requested to be called; forthwith he will be referred to as ‘J’, but whenever you see ‘J’, feel free to substitute it for ‘sexy mysterious latin luvvah’ in your mind) at a park & ride in orange county. It’s a long trip to Magic Mountain, and so we discussed a variety of topics, like that chick with the tattooed forehead who is on the news, and dissected Lady GaGa lyrics, and generally mocked people and had a good time. We had already bought our tickets and parking pass online, so we drove right in. It wasn’t until AFTER we got into the park that the announcement was made that due to wind, pretty well every ride that any roller coaster fan would want to ride was closed, but that we were free to enjoy the rest of the park OR just go home–it didn’t matter because they already had our money and weren’t planning on letting it go. We got in line for the ‘Terminator: Salvation’ ride, which wasn’t actually a new ride–they’d rebranded a coaster that was already there. Within five minutes of getting in line for this ride, an announcement was made that the ride was experiencing technical difficulties but that they’d get around to working on it ‘as soon as they could’. We decided to wait instead of getting out of line–twenty minutes later, they started up the ride again. During that twenty minutes, we were bombarded with commercials from the TV displays in line because unfortunately THOSE never stop working. J and I also got to see the girl in front of us in line carefully popping pimples on her boyfriend’s face. Romance is dead. I do not find this sign funny in an ironic sense but perhaps I will, years down the line.

After approximately two hours in line, we were ushered into a room where they played a seriously lame video about machines coming for the human stronghold that was Six Flags. By this point, I am seriously sick of waiting and did not have even a second of patience to do anything other than mock the video. We were then herded into another room with terminator torsos while the video screamed at us to GO GO GO GO THE MACHINES ARE AFTER US. The heads in the foreground? Pimple Popper and her Bepimpled Boyfriend. The driver passed the first exit. J freaked out. “Where is he taking us, he said the first exit, where are we going?” However, the first exit was to a different highway, which would have done us no good. The driver (who took corners entirely too fast for my liking, what with me all exposed and vulnerable up on a flatbed) eventually dropped us off in a strip mall in front of a taco bell with a gas station down the block on the corner. He told us that the next driver would be around to pick us up in an hour, and at those words, I sprinted down the street to the gas station, ran inside and said “OHGODINEEDTOUSEYOURBATHROOMIWILLBUYSOMETHINGPLEEEEEASE” and the operator pointed me outside and around the corner. I ran back outside, pulled down my pants as I was rushing to the toilet and experienced a moment of truly blessed relief. It was then and ONLY then did I realize there was no toilet paper. Friends, have you ever wiped with paper seat cover? I have. True to my word, I went back inside and bought some aspirin and some gum, at which point J rushed up and said “Melissa, the tow truck driver is here!” I grabbed my stuff and bolted back to the car. My brother was clearly ready to go home by this point.

The driver was really nice, we all loaded into his cab, and he said he would drop J and Andrew off at the park & ride for J’s car. J would then drive Andrew back to his car, and then meet us at the Bridgestone at Fashion Valley Mall to pick us up and go home. What a frigging day. I don’t know why we’re ever surprised when things like this happen–as soon as three or more of my family members get together, this sort of thing ALWAYS happens. Our last name is synonymous with “WHAT THE FUCK?” Now let us never speak of it again.

The Happiest Place on Earth