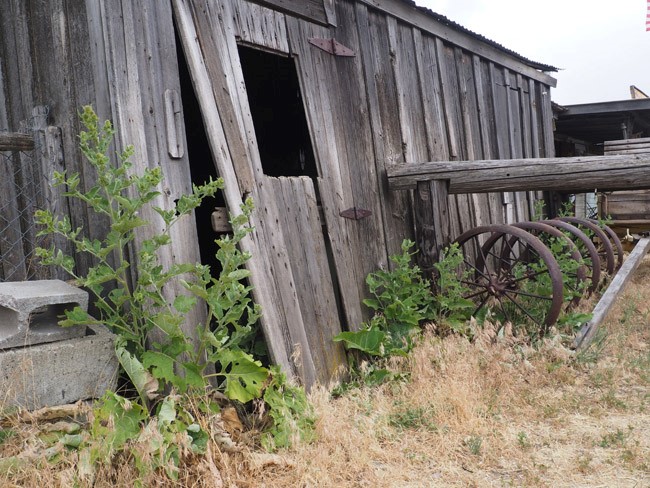 It’s surprising how quickly the landscape changes in Oregon. Almost as soon as you leave Portland bearing east on the historic Columbia River Highway, the surrounding hillsides turn golden and dry, giant trees giving way to small shrubs, craggly hills leaning over the wide blue river. As you push further east and reach Route 97, tumbleweeds start bumbling across the road (hence their Latin name: tumblus bumblus)  and deer can be spotted on the hills to either side, cropping the shimmering grasses and keeping a wary eye out for predators. Still further on Route 97 is the destination: Shaniko, Oregon’s best-known ghost town. Many North American ghost towns were created by the gold rushes of the 1800s. While gold in the somewhat-nearby (150 miles) Canyon City did influence people to move to and settle the area, Shaniko’s big boom (and name change from Cross Hollows) came in the early 1900s, when it served as a temporary terminus of the Columbia Southern Railway. At that time, Shaniko was known for its wool production, and boasted the largest wool warehouse in the state. The Columbia Southern Railway was originally intended to continue out of Shaniko and to the coast, but terrain issues prevented its construction, making Shaniko the permanent terminus of the line. In 1911, two things happened that precipitated Shaniko’s decline. First, a different rail line with service to Portland diverted passengers from Shaniko. Second, a major fire wiped out the majority of Shaniko’s business district. With little incentive to rebuild, many of the businesses left for more prosperous locations, and the settlers went with them. Passenger rail service to Shaniko ended in the early 1930s, and by the 1960s, that rail line was discontinued entirely.

Now Shaniko is categorized as a ghost town, though people do still live there (36 of them, as of the 2010 census). I didn’t run into any of them during my visit–the only other person I saw was another visitor, a trucker who excitedly pointed out the jail and mentioned offhand that he’d seen three rattlesnakes that day, which kept me scanning the ground anxiously and caused Jason to get startled by a hose. Some restoration has been done to the buildings, along with some modern damage because assholes like to carve their names into everything. …not far from the blacksmith shop. Hey! How many blacksmiths does one town need? And while we’re at it, what’s up with ghost towns and christmas lights? Aside from the jail, there weren’t many buildings you could enter, which was a little disappointing. But on the other hand, entering a dark building that may also be occupied by free range rattlesnakes isn’t necessarily all that high on my to-do list.  Either way, by the time I’d checked out the town and taken the all-important jail photo, the sky had grown a threatening shade of gray for early afternoon, so I decided to emulate those 1911 settlers and beat a retreat back to civilization.

4 Comments → With twice as many blacksmiths and 40% more rootin’ tootin: Shaniko, Oregon