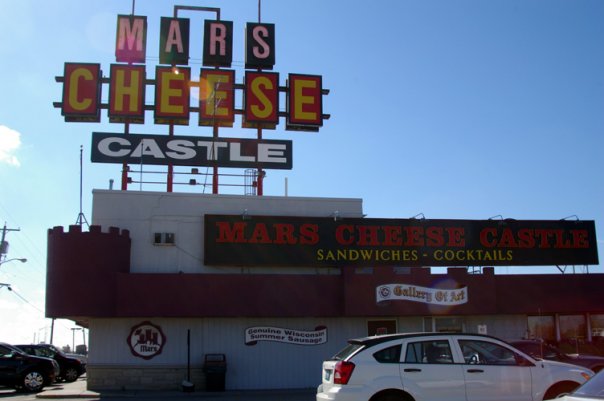 On Thursday, I didn’t go to House on the Rock and the Forevertron, because Nicki had decided to accompany me to the House that Spite Built on Friday instead. She left me her car to tool around, and I decided to drive down to Kenosha and drop in on my grandparents. My first stop was the legendary MARS CHEESE CASTLE. Although the castle is somewhat lacking in battlements and, in fact, is neither made of cheese nor is on the planet mars, it contains many meaty, cheesy delights inside, along with a bunch of ridiculous tourist crap, like Brett Favre action figures. In this House o’ Cheese near Bong Recreation Area (hee hee!), I purchased some chudge (a questionable portmanteau of “chocolate cheese fudge”, creamy and delicious), a piece of cheddar shaped like Wisconsin, a cheese kringle for breakfasting, and some butterscotch root beer. During this time, I was hit on by a skeezy man with about three teeth who looked me up and down and said that everything in the store looked ‘deee-licious’. You can’t see it, but I’m shuddering.

After my cheese purchase, I saw a sign indicating that the Jelly Belly factory in Pleasant Prairie gives tours, and I was all over that like a fat kid on a…jelly belly. Things I learned:

After I left Jelly Belly, I swung by China House in Pershing Plaza, where I used to have lunch once a week when I worked at Music Center on Green Bay Road–so many of us were regulars there that we could call in an order and they’d deliver to us, even though they don’t DO delivery. 10 years later and I recognized most of the people working there, which blows my mind a little because I’m such a job-hopper.

Cincinnati Eats: Famous Chili and the Best Pie in Ohio