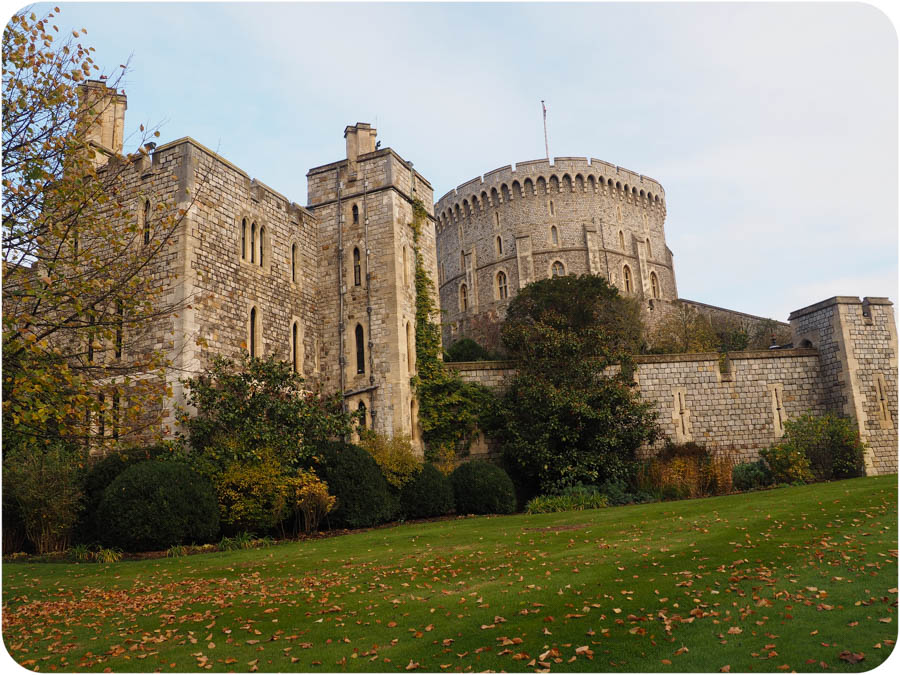 Having visited every Stonehenge within driving distance of my house, I certainly wasn’t going to miss an opportunity to see the real thing in person. However, given that I have less than an hour’s experience driving a manual transmission and I wasn’t keen to work on my skills while also becoming used to driving on the opposite side of the road, I decided to do the best thing for everyone involved and join a tour group rather than cause an International Incident. The British Tourist Board has been pounding my inbox ever since I entered an essay contest to win a trip–“Have you visited Britain yet? Why not?” and I have to say that the constant wave of advertisements worked because I booked my tour through their website.

There are a number of day trips out of London to Stonehenge, most bundled in with other stops, primarily Windsor/Bath/Oxford. I lobbied hard for Bath, and Jason for Oxford, and we ultimately settled on a Windsor/Stonehenge/Oxford tour, the determining factor for Oxford over Bath is that it seems a shame to go to an area renowned for its spas and not have time to indulge, whereas no one expects even the most motivated learner to earn a degree in an afternoon. Windsor Castle was a given– I’m a nerd, of course I love shit like castles.

After a slight kerfuffle about where to meet the group (it turns out that Victoria Coach Station is a different thing than the bus stop outside of the tube’s Victoria station and has nothing whatsoever to do with Victoria’s Secret), we departed from London bright and early. On the way to our first stop, Windsor Castle, our tour guide told us what to expect from the day in terms of our schedule and repeatedly stressed that if people are late returning to the coach, they will be left behind, merrily telling us of passengers they’d abandoned at various locations around England and how we didn’t want to find ourselves in the shoes of those unfortunate souls. NOTED. I did not want to be on the hook for an Uber from Wiltshire to London. Windsor Castle is reputedly the Queen’s favorite, though she was not in residence at the time of my visit. Like the Tower of London, Windsor Castle was built in the eleventh century by William the Conqueror.  Since then, it’s undergone massive renovations several times as it became used less as a stronghold and more as a royal court. No photographs are allowed inside Windsor Castle, and this is enforced in a rather roundabout fashion. After passing through an airport style security check, visitors are handed a large, awkward audio guide which effectively fills their hands too much to fumble with a camera and if they try, it’s immediately evident. Well played, Windsor.

The first tour is of Queen Mary’s dolls’ house. It is no doubt an extraordinary technical achievement to reproduce such grandeur and detail on such a small scale, but it’s difficult to appreciate the nuances of miniature craftsmanship when you’re being hustled through the room in a long line of impatient strangers, all eager to get back to their respective buses. At that speed, my brain just went “Yep, that’s a doll house, all right” and didn’t really register much more. Each room of the dolls’ house has been photographed, each item has been cataloged and documented, and items are regularly taken out, inspected, cleaned, and repaired. If I worked there, I would find it nigh impossible to resist making and tucking in the occasional new accessory, like a tiny ouija board or Necronomicon. I wish I could have photographed the interiors of Windsor–not because I would have done them any justice, but because there’s so much to take in and so little time, and there’s no ticking clock when I examine a photograph after the fact. The rooms were resplendent with rococo and baroque designs. The furniture, oh! the furniture! (Personal to Your Majesty: if you ever decide to redecorate, keep me in mind for your cast-offs.) When I have a gilt desk, no doubt I will stop writing such low-class fart jokes. Instead, my fart jokes will be refined and elegant, like a fart gliding through a silk nightgown.

We lingered behind as large groups passed through the various rooms, wanting some time and space to appreciate the decor and also have the opportunity to ask questions of the Wardens stationed within. You’ve heard the old chestnut “there’s no such thing as a stupid question”, yes? I can attest that this is not the case, as you should have seen the Warden’s face when I asked if the princes get ceremonial armor. “No,” he laughed. “They do not.” Apparently tradition doesn’t extend that far, which is kind of disappointing. It seems like that should be one of the perks of the princedom, being able to clink around a palace in a suit of armor, pretending you are a Transformer. We paid a penalty for that leisurely tour, however. After the tour, a trip to the restroom, and a debate at the gift shop as to whether we should purchase a tiny crown to go with the tiny stuffed corgi (we did), I began to feel the invisible finger of time poking at me, making the hair on the back of my neck rise. I interrupted the cashier halfway through her spiel about getting refunded on tax paid to inquire about the time, which is when I discovered that we were still smack dab in the middle of Windsor Castle with a scant five minutes before our bus was set to depart. There was no time to check out St. George’s Cathedral, there was no time, period. We grabbed our bags and bolted out of the gift shop, slowing down only to return our audio guides. We must have made quite a spectacle, sprinting out of the castle grounds, past the guards, and down the street, up and down a flight of stairs, dodging baby carriages and people alike. I arrived, red-faced, sweaty, and breathing hard, just on time. I took my seat, and then we waited twenty minutes for some other straggling passengers to arrive. I don’t know what I’m angrier about: that I didn’t get to see the cathedral, or that I ran for nothing. Probably the latter, if I’m being honest.