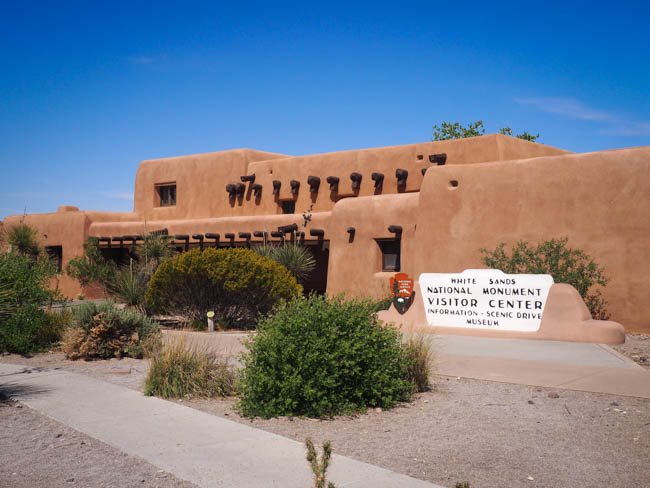 Sorry, Anakin, take a seat and buckle your whiny ass up, because we’re headed to the Land of Sand: White Sands National Monument. Composed of gypsum from under the Permian sea, the sand is soft, cool, and almost impossibly white, glittering in vast dunes under a deep blue sky. It is, in fact, the largest gypsum dunefield in the world, home to more than 800 animal species, some of which are endemic to White Sands. And it was in this ecological marvel that we were going to go dune sledding. Now, before you get your engine all revved up about my clear lack of respect for these natural areas, I would like to clarify that this is national monument sanctioned dune sledding as in, they sell the sleds on site. Which is good, because there was no way a sled was going to fit in the overhead compartment and I don’t know where one might find winter sporting equipment for sale in the middle of the desert at the end of April. Maybe lots of places, I didn’t check. The transition from the surrounding area to the dunes occurs rapidly–first I saw a line of jagged white at the horizon, and then suddenly my whole world was sand, sand covering the hills, the road itself. Inside the dune areas, the roadway is grooved, presumably for traction. The rental car did not like this one bit, and it jittered and shook like the bridge of the starship enterprise on top of a vibrating bed. “This is what I get for not buying rental car insurance,” I groused. Thankfully, violent shaking was as bad as things got, and we were soon able to find a parking spot in a location I was pretty sure wouldn’t get buried in a sand drift by the time we were ready to leave. After parking and waxing the bottom of the sled, we trekked out into the dunes, looking for just the right one. Eventually we found a dune that was suitably steep and it was sledding time. Jason has discovered a new interest in video recording on his phone, particularly using the slow motion effect. Unfortunately, when those videos are removed from the phone, instead of a small portion of the video being in slow motion, the entire thing is slow motion, so I am now in possession of a video in which I make deeply disturbing sounds as I struggle to launch a sled down a sand dune and laugh like Jabba the Hutt at the bottom. And because this is really one of those things where one should show and not tell, that video is included in this post. You’re welcome. The thing about dune sledding is that for each five seconds of sledding joy, there’s a much longer slog back up. At first, I circled out to a lower incline ascent so I could walk up but by the second slide, we were both brute forcing our way back up the dune, feet scrabbling in the sand, using the saucer to dig in and pull ourselves upward, in a balmy 81 degrees. And we each did it something like six times, at which point, I was well and truly tired and ready to head back to the car. On the way, I spotted some plants I wanted to photograph, and a bleached earless lizard (one of the species that has adapted to the white landscape) and I happily snapped photos for a bit. When I stood up, my vision went black. Even though I’d worn a hat and sunscreen and had been drinking water, clearly I had still overexerted myself a bit. I felt baaaaaaaad for at least an hour afterward, so I probably should have stopped sledding just a bit sooner. Or drunk even more water. Or both. Jason had maybe a little sand in his shoes. And also a hole. Oh yeah, and while I was gone, I’m pretty sure a mummy climbed into my trunk. This Didn’t Deserve Its Own Post: New Mexico Edition