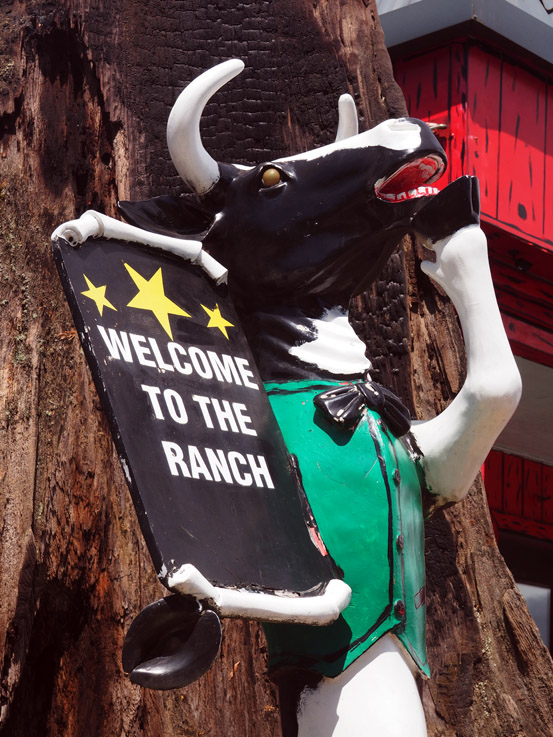 I plugged a quarter into their chucklin chicken, and the employee told me I’d need to shake it to get it to work. I took that as an invitation to hulk out and accidentally knocked the chicken right off the top. Whoops! The chicken suffered no lasting harm. My embarrassment has lingered. Most of the time, a roadside attraction is the business in and of itself. In the case of Mattress Ranch, the roadside attraction was built to support the business. I first drove past Mattress Ranch on my trip to Forks and had intended to stop on my way back, but by then it was too dark for photos and the store was closed. This time, there was an epic backup at the ferry I planned on taking, so in lieu of waiting, I decided to drive around the peninsula instead, the existence of Mattress Ranch tickling the back of my mind. I STILL almost drove right past it again, turning across two lanes of traffic to get into their lot.

After taking photos of the lot, I ventured inside to avail myself of their restroom and see if there was anyone who could answer my questions about the place. As it turned out, one of the employees on site had worked there on and off for the last twenty years and was more than happy to tell me all about the origins of the attraction attached to the store. As it turns out, Mattress Ranch isn’t one store, but a chain of stores in Alaska, Washington, and now Arizona. It feels weird to me to post about a chain store, but then again,  this place isn’t exactly Target. Originally, they had a few black and white cows outside, but after the paint started to flake, they decided to spice them up a little, and they haven’t looked back since. Every year, the menagerie out front grows, and so does their commitment to the community, even using 25% of their commercial air time to support charities and other local businesses. I don’t know what it is about strutting around a mattress factory, waving a fistful of money and talking about his cow of a wife and pig of a daughter in law, but I dig this guy’s vibe. He proves, once again, that local commercials are the best commercials.