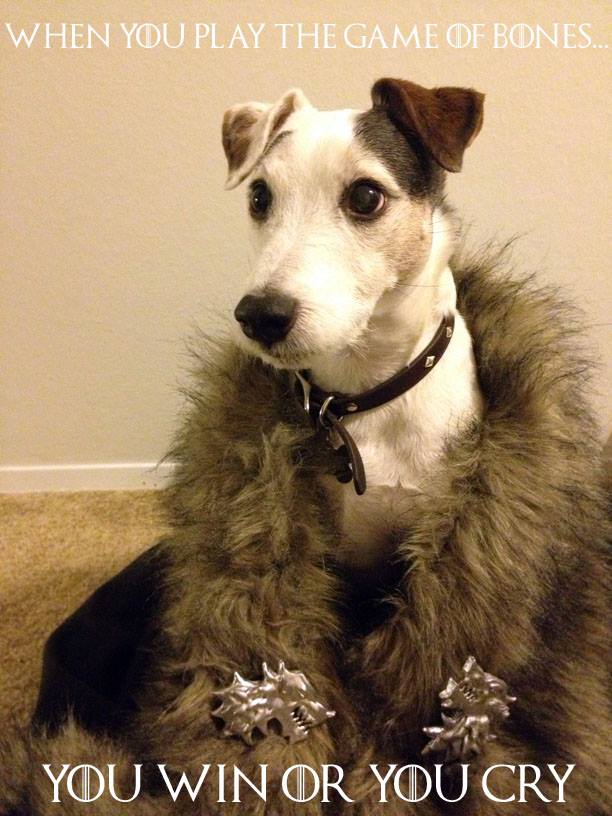 I am super pumped for this weekend–it’s the last weekend of the Moisture Festival! Game of Thrones returns! There’s an Easter II feast on Sunday! Plus I just made some homemade butter which practically begs for the buttermilk to be used in some lilac scones. I was hoping to get some time out in the backyard this weekend since I’ll be out of town for the next three and the blackberry bushes are already getting a little too bold in their advancement  (let’s just say it won’t be a surprise when they bust through my bedroom window and attempt to strangle me in my sleep), but it’s supposed to be cruddy out so this may be the excuse I was looking for to rent some goats to take care of business for me.

Speaking of upcoming trips, I’ve got a short jaunt to Portland in the works and a longer one to Hawaii, so I should have some good stories to share soon. There are already tentative plans in the works for insect eating and ghost teasing, both of which I’m sure will go swimmingly and not at all like last time.

This week, I rekindled my love for the gifsounds subreddit–here are my three recent favorites: 1 2 3

I’ve also been catching up on The Walking Dead this week, which means that my zombie burnout has come to an end, at least in this instance. No spoilers here, but it makes me laugh that Judith always looks like she’s confused and angry to be growing up in a world without Cheerios and animal crackers. I’ve also come to realize how profoundly irritating loudly chewed gum can be.

Also on my TV recently: Face Off Season 8. I called Emily Serpico as the winner in episode one, so it was exciting to see her make it to the finale this week. Everyone left is a talented artist, though, and at this point, I think they’re all deserving of the prize. It’s been especially gratifying to see a bunch of women kicking ass and taking names this season, since I’ve complained before about men dominating the positions of authority. No matter who wins, I’m so glad that Face Off has stopped the “not here to make friends” format. I haven’t watched most of the seasons because of the typical backstabbing present in the earliest seasons, and I didn’t think it served the artists to trash their reputation before they ever made it into the SFX industry–it’s so small, and it’s hard enough to get work (much less paying work) without someone thinking you’re difficult or obnoxious. The only aspect of this season I’d call a swing and a miss is the “coaches/team” aspect. Yes, the coaches are there for guidance, but it’s not quite clear what the coach gets out of participating, and whenever they’re on camera, it’s generally worrying about how one of their team members doing poorly might affect them personally. I’m just not feeling it.

In my kitchen this week: gyro lettuce wraps and animal style in and out in a bowl. I’ve been doing the low carb thing six days a week for a few months and it’s working out well for me–I’m fitting into my smaller pants and I don’t feel deprived, and those are both good things.

On my nightstand/in my Kindle:

Mothers Who Can’t Love: A Healing Guide for Daughters – This book is a tough read, but it’s been helpful for me to come to terms with an aspect of my past that has had a long-lasting impact on my life and personality. I’m sure that it’s something I’ll keep referring back to, and if you have a strained/difficult/nonexistent/toxic relationship with your mother, you may find it helpful as well.

Bad Trips – I’ve been looking for travel writers I like outside of Bill Bryson, and now that I’m 75% of the way through this book, I’m fairly confident that I won’t be finding what I’m looking for here. They’re all such twats! There’s a guy whose bad trip was actually a good trip for him, it’s just that a woman he met during his journey was raped twice in short order, and he wondered if she hadn’t been able to shake it off and have a good trip like him that it would have been some fault in her upbringing instead of, you know, the trauma of having been raped at knifepoint twice. There’s a made up story about a tour group going on ‘safari’ to Central Park to watch a woman getting sexually assaulted and blaming her for her own assault. There’s a piece by Umberto Eco complaining that a hotel isn’t decorated to his taste. There are a few pieces where people merely imagine what a bad trip would be like, namely concerning doing the sorts of activities that your average tourist engages in and you already know that I loathe that sort of elitism. I’m finishing it out of stubbornness.

The Queen of the Tearling – I picked this one up mainly because I saw that it was being made into a movie starring Emma Watson, and I wanted to be in on the hype loop for once instead of wondering why everyone is so pumped for a movie I’ve never heard of. I’m really torn on this one–I read through it in two days, and while I was reading it, I was 100% sucked in, but now that I’ve finished it, I have no desire to read the next book in the series. Even with its interesting setting (a return to medieval structure postdating our current technological society, in a place where magic is a thing), the characters and the storyline just felt too familiar. Plus, with the chapter intros being excerpts from books written about the main character at a future date, there’s not really any question as to whether she will prevail.

Mr Mercedes: A Novel – I love me some Stephen King, and it was refreshing to see him go for a detective novel rather than supernatural horror. This is another book that I cracked through in a day or two. It’s fast-paced, deeply engaging, and I only wish that King wasn’t so comfortable with the n-word. I’ll be glad to see those same characters come back in Finders Keepers.

Too Fat For Europe – This is a self-published work by a friend of a friend, and is generally enjoyable. It reads like a long-form blog entry, though, and it could use the strong hand of an editor in a number of ways. If it were up to me, I’d also axe the photos entirely or swap them for illustrations. Granted, I have one of the older, cheaper Kindles which may be a contributing cause, but the photos are so muddy and don’t add anything to the experience.

What are you up to? Any weekend plans? What’s on your plate–food, books, or otherwise?

Stuff I Do When I’m Not Here