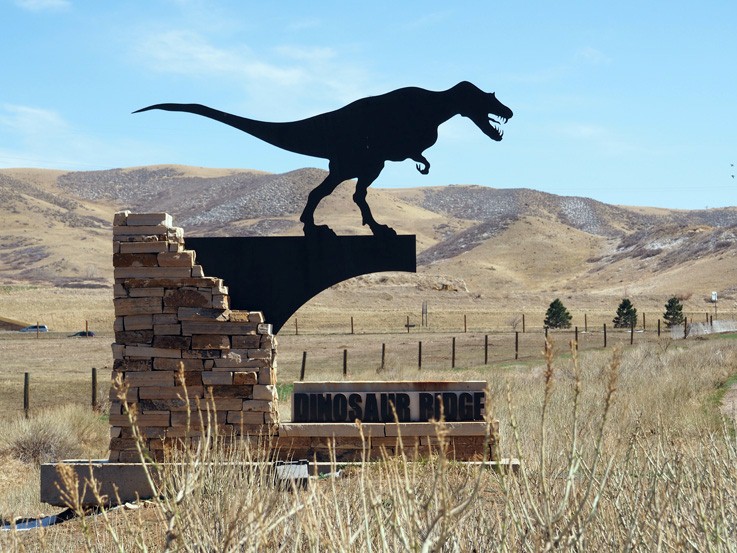 If you’re into dinosaurs and paleontology, Colorado is an excellent place to visit. The Morrison formation has been one of the most fertile sources of Jurassic fossils in North America, but more than that, it was one of the main sites of the Bone Wars between Othniel Charles Marsh and Edward Drinker Cope in 1877.

Cope and Marsh loathed each other with a passion that made for excellent stories but terrible scientific method; not only would they rush to be the first to name new species (resulting in misidentifications like the Brontosaurus), but they’d also sabotage each other’s sites, bribing, stealing, destroying fossils, and each trying to ruin the other’s credibility so as to cut off his funding. Basically, if these guys were around today, we’d ask them to celebrity box or kiss and get it over with. Or there’d be a reality show: EXTREME PALEONTOLOGY. As it stands, they made both enormous contributions and did substantial harm to the field, discovering species while yet reportedly blowing up others with dynamite; their lasting animosity left both destitute, and yet they still would not yield. Before his death, Cope issued a challenge to Marsh by donating his skull to science, his desire that Marsh do the same so that their brains could be measured to “prove” which was more gifted. Though as we know, brain size is not an indicator of intelligence, and they’d both be dead anyway, so I suppose it was just a matter of getting it in the fossil record. Marsh never took Cope up on the bet, but Cope’s skull is still hanging out at the University of Pennsylvania today.

What makes Colorado so awesome for paleontologists, aside from apparently easy-access dynamite? Well, it was above water during the Jurassic and underwater during the Cretaceous, which means that it has an astounding diversity of fossils–dinosaurs, plants, and marine reptiles. The area was then uplifted by the formation of the Rocky Mountains, and at the Morrison formation, a creek carved through it, exposing the strata of Mesozoic and Paleozoic sedimentary rocks. Excavation is no longer happening at the Morrison formation, but you can tour and see all of these things for yourself: it goes by the more tourist-friendly name Dinosaur Ridge. You can do a self-guided tour and hike up Dinosaur Ridge, or you can pay a nominal fee at the visitor center and take a guided tour on a shuttle bus. We elected for the guided tour, and you can decide for yourself whether it was laziness or the thirst for knowledge that drove that decision. I don’t want to spoil the story, but we only saw one of these things. And we saw a LOT of them. We arrived just in time to hop aboard the next shuttle bus. Unfortunately, so did several families with a veritable herd of children around the age of two. I believe that the scientific term for a gathering of children around that age is “a terror”. We should have waited for the next bus. It’s not that our shuttle guide wasn’t fantastic–she was! She was knowledgeable and enthusiastic, she was quick to point out photo opportunities, and she deserved every cent of the tour fee and tip we gave her.

Unfortunately, however, it was incredibly difficult to hear anything she had to say over the reverberating screams of that many children. I’m not saying this as an unreasonable kid-hater, I’m saying this as one of the only two people on that bus trying to hear the tour guide, the other being Jason. Literally no one else was paying attention to her. Not the screaming kids, not the parents with glazed-over eyes. She’d ask a question hoping for a response and get “AAAAAAAAAAAAAAAAAAIEEEEEEEEEEEEEEEEEEEEEEEEE” shouted back at her for her efforts. Hostage negotiation and traffic control are notoriously difficult jobs, but I’d put this at a close third. At least in those first two professions, you don’t spend any portion of your day hoping for the sweet release of death. I’m sure there are things I would have liked to have learned about whatever it is going on in the below photos, and I would have been happy to share that knowledge, but when I think back to this tour, I mostly just hear “AAAAAAAAAAAAAAAAAAIEEEEEEEEEEEEEEEEEEEEEEEEE” which is really only helpful if you’re looking to memorize some of the vowels.  Sometimes I think it would be helpful to travel around with a little notebook so I don’t forget important details, but in this instance, I think all that would have come from it was a series of furious scribblings of increasingly angry faces. One thing I did learn is that one way paleontologists quickly determine if they’ve found a fossil is to lick it, though the tour guide recommended that we not lick any of the fossils on site as they’ve been touched by many many many hands. I don’t know whether I’d rather lick a stranger’s hand or a coprolite, personally. Preferably neither. I also learned that the bulk of Allosaurus remains have come from this area, and that Allosaurus may have been a more badass dinosaur than the more popular T.Rex. T. Rex is widely believed to be a scavenger and carrion eater. Allosaurus is believed to have been more involved in active predation; with their incredible expanding jaws, they could eat a chunk out of live prey and run away, and even if they took a beating for doing so, they often lived to see another day.  Plus: usable arms. Dinosaur ridge needs to update their signs! Though “Apatosaur Bulges” doesn’t sound as pleasing to the ear. The area the tour guide is standing in originally contained a fossil that was cut out by some modern-day fossil-wrecking buttwad, possibly a descendent of Cope (Marsh never married). It was eventually found (I am not making this up) propping open a door at the University of Colorado. The next bus that rolled up the hill only had two adults on it. Damn, we should have waited.

Spotted on the Roadside: Dinosaur Topiaries