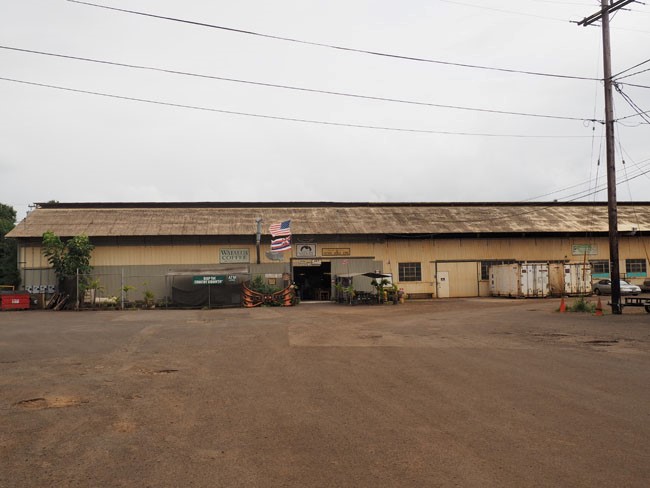 Before we arrived, our airbnb host thoughtfully provided us with a huge list of things to see, do, and eat in the area, right down to what we should order (his off-menu “Andy salad”, for example). One of the things he said we absolutely should not miss is the old Waialua sugar mill because their shave ice is made with natural fruit syrups instead of artificial flavorings, which he said makes it “the best on the island”. Having just delighted in the garlicky burn of Giovanni’s shrimp, we were in need of some cool refreshment, and so we set out on our shave ice journey. “Let’s get some deliciousness!” I announced as we neared the parking lot. “…From this dump!” Because, let’s be real, this rusty warehouse doesn’t scream culinary delight. You’d not guess it to look at the building, but Island X/Waialua Coffee and Cacao Mill is actually owned by Dole, which I suppose makes sense–they get all of the people who are like “Fuck yeah, Dole!” with the Dole Plantation, and all of the people who are like “Fuck giant agribuisnesses!” with the more nondescript Island X. Their method of gift shop stuffing is the same, however, as you can buy nearly any tourist tchotchke you can dream of inside, with the possible exception of a tiny monkey in an aloha shirt. I say possible exception because it may well have been there, I just missed it.

As we walked in, the staff announced they’d be doing a coffee and chocolate tour momentarily out back, so I dutifully made my way outside. In this short tour, the staffer explained a bit how chocolate is grown (which is something you may remember from Chocolate Week last year). Hawaii is just barely inside the cacao belt which makes it a viable place to grow the crop commercially, unlike the sad indoor Charlie Brown Theo cacao tree. It was cool to see a mature tree in bloom, as well as growing pods, and before the tour was over, we had another opportunity to try a piece of horrible alien worm baby. Basically no one in the tour group was down with putting a piece of cacao fruit in their mouth until I cajoled them into it–it’s not that the fruit is delightful, but I do think tasting it gives you a better perspective on how much work it actually takes to turn this seed into chocolate, and there aren’t many places you can try the fruit otherwise. Afterward, we got to try as many coffee and chocolate samples as we wanted, though the chocolate was doled out by the molecule. The coffee was self-serve, and while it was too warm out for me to want much coffee, I did try a few and settled on the Waialua peaberry, as I promised my favorite baristas that I’d bring them back some coffee. Just a small bag each, as I was concerned things would get weird between us if I brought back something larger, like I was trying to buy their friendship or hoping for some kind of under the counter payback. After the coffee tasting, it was time for the hyped natural shave ice. I already knew the joy that came from eating brightly colored ice cold artificially flavored sugar water, so my body was ready for what was sure to be the transcendent natural shave ice experience. I got mango with coconut sauce, Jason got taro, and we were both equally disappointed. Each one took a damn year to make and between the length of time it took to make them and the year it took to pay for them (they have a sign saying that they accept cards but you have to go wait in a different line and then she only charged us for one so we had to wait more), they were like crusted-over shitty flavorless slushies. I’ll take a still-frozen artificially flavored and colored shave ice any day over this natural business. But we did get to see this thing. Whatever it is.