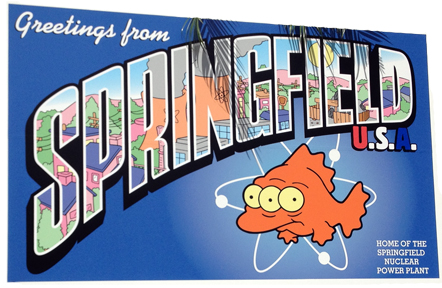 The world is full of Disney people, but for me, the theme park best-equipped to hoover money out of my wallet is Universal Studios.  There are actually two Universal Studios parks in Orlando, and we planned to spend a full day at each, plus a third visit for Halloween Horror Nights…but our first priority was to go to Springfield. Universal just opened the Springfield expansion this summer, and just like John Hammond, they spared no expense, loading the area with large references and small nods alike.  You can have a drink at Moe’s Tavern or at the Duff Brewery. You can eat at a number of Springfield eateries, including Krusty Burger and The Frying Dutchman, and wash the whole thing down with a Buzz cola. Even the garbage cans were branded with a Jebediah Springfield logo! In addition to the Krustyland ride they already had, they also opened Kang & Kodos’ Twirl ‘n’ Hurl so you can empty your stomach and try something else…or just wait a few hours until you’re hungry again, whatever. The bathrooms even smelled like cotton candy! It was magical. As a Simpsons superfan, I’ve got two bones to pick with the area. Just two. One, I didn’t care for how all of the different eateries had storefronts to make them look like standalone structures but actually opened up into a large cafeteria–I would have preferred the experience of dining in what felt like the Frying Dutchman or Cletus’ Chicken Shack to generic tables. Two, their Flaming Moe is a travesty. The Flaming Moe is supposed to be made of multiple kinds of liquor, non-narcotic cough syrup, and set aflame. What they served us was orange soda with dry ice.  I understand that setting drinks on fire is probably a difficult or expensive thing to insure, so I would have given that a pass…but at least make it a long island iced tea and not watered-down orange drink! I probably wouldn’t have had a Flaming Moe for breakfast like I did that day, but I still would have purchased one. This is not a Flaming Moe! This is orange drink. We spent a ton of time in Springfield, taking pictures with the characters, eating at Krusty Burger, riding the rides, shopping at the Kwik E Mart, and even playing the midway games.  I won two out of the three games I played, which is actually pretty decent, though I wish I would have won the sledgehammer game for bragging rights alone, especially after watching a mess of dudebros (Is a “mess” the proper term? Or should it be “a popped collar” of dudebros? Or something else?) try and fail. I came SO CLOSE to winning, but close doesn’t cut it. I still came home with a Krustyland pillow and a Homer plush, so I’m not complaining…much. Hey, Surly only looks out for one guy…Surly. …DAMN IT!   We did see and experience most of the rest of the park that day. There was a show about makeup SFX that was entertaining (and I was happy to see that the expert was a woman), and I loved the tribute to Lucille Ball, who is absolutely one of my favorite actresses. If I could be even a quarter as funny as she was, I’d be satisfied. The strangest thing I did that day was participate in a survey about paper towels. They offered me park money to tell them what I thought about various paper towels, their attractiveness, their softness, their absorption qualities, their coolness factor, and their overall appeal…but I was explicitly told not to touch the paper towels. At all. The woman who came in to pull out the towels for me to look at actually put on fresh latex gloves each time to handle them. I’m not very good at determining softness or absorption with my eyes, and as it turns out, I really don’t give a shit about paper towels, but when I received that Scooby Doo money, I knew my opinion was both powerful and valuable.  I believe I purchased a churro with my earnings. We also had a tough guy posing competition in the licensed Terminator jackets. The majority of the other rides were fun if not particularly remarkable, with two exceptions: TRANSFORMERS: The Ride, which was horrendous, and Hollywood Rip Ride Rockit, which was awesome and terrifying at the same time. While the ride itself was excellent, it was the boarding/deboarding process that really terrified me. You see, most roller coasters come to a complete stop to allow people to get on and off. This one slowly rolls past on a conveyer belt, giving you limited time to hop on and strap yourself in. As our line crept forward, I kept picturing myself either tripping on my way into the coaster, or not having enough time to get myself properly strapped in and being flung out of the coaster at 65mph, down 17 stories. Thankfully, neither of those things came to pass, but my already-hyped adrenaline from the boarding process definitely helped make the overall ride more intense. One thing that DID fly off on the Rip Ride Rockit were Jason’s fingerprints. Universal has lockers that you can use for the duration of the ride that are keyed with your fingerprint. We locked up our belongings, but when we went to retrieve them, we kept getting errors. Eventually, we were able to flag down an attendant to help us, and before he opened it, he asked us to describe the contents of the locker.  “Let’s see…we’ve got an Itchy & Scratchy hat, a pair of sunglasses…and a picture of him making a stupid face.” You see, earlier that day, I’d actually plunked down money for a “photo opportunity” photo of Jason in front of Optimus Prime. When the attendant opened the locker and saw the picture, he burst out laughing, and I knew I’d made the correct decision. Behold, in all its glory: We come from Springfield and we sell swampland!

3 Comments → Springfield, Springfield, it’s a hell of a town! The schoolyard’s up and the shopping mall’s down!