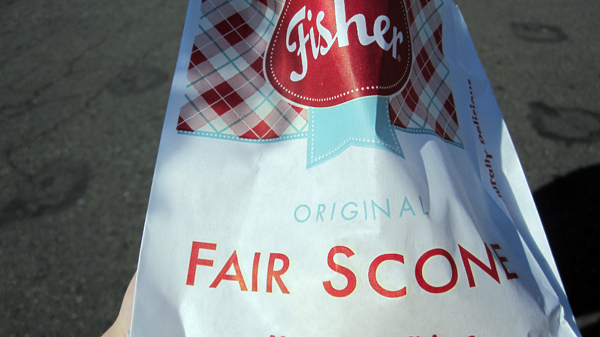 It’s fair time in Washington, which means it’s time to dress down, slather ourselves in sunscreen, and broaden our palates by eating things we normally enjoy, now battered and deep fried. In honor of this occasion, Jason and I rewrote the lyrics to Rebecca Black’s “Friday”, which served to pump us up and thoroughly annoy Tristan over the course of the forty minute drive to the fair:

Our game plan was fairly straightforward: Walk around the fair once to determine the foods we were going to attempt to cram down our throats, then eating round one commenced. After eating, we’d go to a barn to check out some animals, after which came food round two, then came checking out arts and crafts and the “miracle” As Seen On TV crapfest of booths, and then the third round of eating, the danger round, in which you consume the things you feel are most likely to kill you or cause you to violently eject the contents of your stomach over a square block. Round one was the scone round. I’m not typically a scone fan, finding them dry and bland. Fair scones, stuffed with raspberry jam and butter, are another story. Then we looked at some mini-horses and some normal size horses and some really big horses, and then some chicks for good measure. If we collected one of each of the animals I squealed over and asked if we could take home, our backyard would now be quite a menagerie. I pledge my Head to clearer thinking, my Heart to greater loyalty, my Hands to larger service and my Health to better living, for my club, my community, my country, and my world, which does not leave a lot of room for pledging my computer to more spell-checking.

Round two was the krusty pup and funnel cake round. Jason’s funnel cake sense had been tingling all week, so when he received a burnt, overly dense funnel cake, it was a sad disappointment. He took a few bites and was ready to throw it away, Tristan took a bite and also declared it a piece of funnel crap, and I elected to pass in order to attempt to save room for the third round. We made our way to the Hobby Hall, and couldn’t believe our eyes. Lurking inside were some of the ugliest and most horrifying pieces of artwork ever created. Ever. “Hi, I’m a Lego model replica of the 9/11 terrorist attacks, but you can call me by my nickname: Tasteful.” “Hi, I’m a Lego model replica of the crucifixion of Jesus, complete with magic marker blood, made by an 8 year old.” Seriously, what 8 year old thinks “CRUCIFIXION!!!!!!” when it’s time to play with Lego bricks? We were all too eager to leave the Hobby Hall to get to Round Three: The Danger Round, which took place at the Totally Fried booth, where anything you’ve ever considered eating has been coated in batter and deep fried. Tristan ordered deep fried butter and deep fried kool aid. I noted that they had deep fried Rocky Mountain Oysters, and since it was potentially the most vile thing on the menu and therefore a dare, I stepped up to order and consume some bull testicles for the entertainment of my friends and blog readers. However, they had not yet received their bull ball shipment and I was turned away empty-mouthed. Deep fried butter on the left, deep fried kool aid on the right.

From others’ accounts of deep fried butter, it’s supposed to taste like REALLY buttery dough–that is, the butter inside should have all melted and absorbed into the coating. This was not the case. Tristan picked up one, and at least a quarter stick if not more of nearly solid butter dropped out from the batter. He gamely took a bite of the other, and butter squirtled (it was too solid to have merely “squirted”) out from the sides of the dough and his mouth. It was pronounced disgusting and we moved on. It’s hard to imagine, but deep fried kool aid was even more disgusting. We all came to the table with different ideas as to what deep fried kool aid might entail–a puff of dry sugary powder in the middle, that the dough itself was infused with the kool aid flavoring, so the reality of it came as a surprise. We each took a bite, and we each made a horrible face. Deep fried kool aid can best be described as a ball of fried dough surrounding raw pancake batter flavored with cough syrup. It coated our tongues with the taste of evil. While Jason and I tried to flush our mouths with lemonade, Tristan ran off to throw it all away before getting another krusty pup to cleanse his palate.

2 Comments → “Ugh, I’m going to throw this crap away before I vomit.”