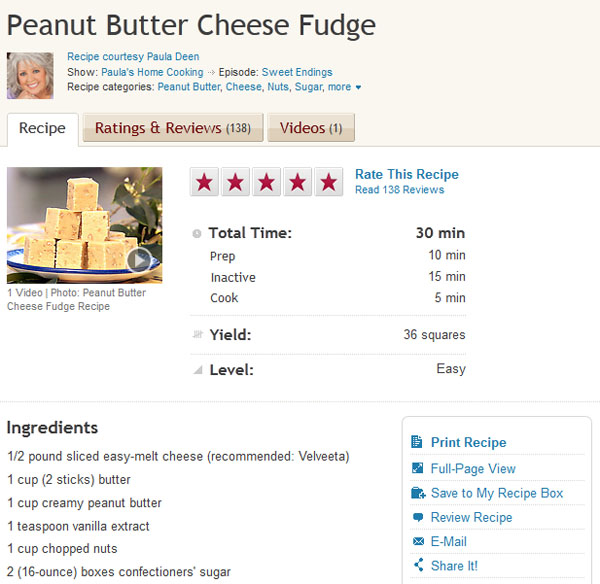 The people have spoken: chocolate and cheese together have an irresistible power. At least when it’s white cheddar and dark chocolate. Along comes this abomination: Let’s say it together: Peanut Butter Cheese Fudge. “You got your chocolate in my peanut butter!” “You got your peanut butter in my cheese!” Velveeta cheese, to be exact. Known for its meltability, Velveeta is the hillbilly of cheeses. It’s the cheese that you hope shows up on the cracker tray at the wedding of someone you don’t particularly like. It’s also rumored to be clear before the factory adds that nuclear orange color and seals it into shelf-stable bricks. MMMMMMMM. Now, thanks to the power of Paula Deen, it comes swirled together with Jif, because that’s what choosy mothers choose when they don’t like their kids very much and want to murder them with peanut butter cheese fudge. Also, there’s no chocolate in this fudge whatsoever. NONE. Granted, the definition of fudge does not include “chocolate”, but when I hear “fudge”, I think “chocolate”. I don’t think “sugar, butter, and milk heated to the soft-ball stage and then beaten so that it acquires a smooth, creamy consistency”. So when I gagged at the name Peanut Butter Cheese Fudge, know that I was also including chocolate in the mental mix.

You, however, may judge it on its merits.

And since there are days when one poll isn’t enough, here’s another food item for you to contemplate: “Tacos” flavored ramen. It appears to be some sort of new haute Mexican-Asian fusion cuisine, with its noodles and tomato and lettuce and corn and some form of meat. For those of you unfamiliar with cup noodles, these are sold on a shelf just down from Velveeta, and you add hot water and let everything rehydrate. Mmmm, shelf stable little clumps of dehydrated meatballs. Tacos and ramen: two great tastes that taste great together? YOU DECIDE.