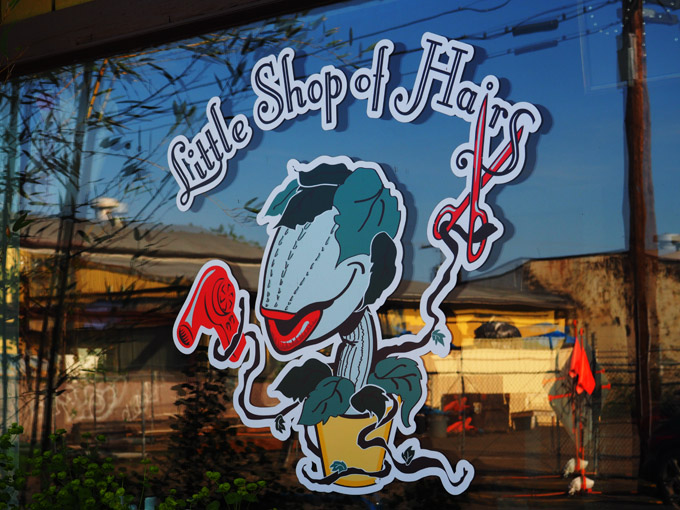 Little Shop of Hairs is the most delightful name for a salon ever. EVER. I made a special trip to The Candy Basket to see what they were claiming is the world’s largest continuous chocolate fountain. Their claim may hinge on the word “continuous” as it’s definitely not as large as the Guinness-verified Bellagio chocolate fountain. Even “continuous” is a stretch since it’s not actually working right now, and according to the employee at the shop, hasn’t worked for a while. Boo! Hiss! I loved this artwork, and I’m tempted to put out a wee “I’m watching you” Lorax for those little bastards who get high behind my house. This is the best version of the food pyramid I’ve ever seen. It is important to eat your pizza vegetables! * I tried to visit the Rimsky-Korsakoffee House as I’d heard it praised as something that was helping to keep Portland weird. Unfortunately, it was packed full and was so hot that I couldn’t bear to stay inside (I know, what a delicate flower). Apparently the bathroom is pretty creepy, but there was also a line for that, and I draw the line at waiting in line to look at a bathroom.

* At one point during my trip, I was getting ready to leave my parallel parking space when a man stepped behind the car and stooped over in the street. I assumed he was tying his shoe, and since he was so close to the car and I needed to back up to exit the space, I decided to wait until he was done because I didn’t want to scare him. I know that I would be startled to see a car backing up on me, especially if I wasn’t sure they’d seen me behind them. But he seemed to be taking an awfully long time. “What is he doing? Relacing both shoes? Why would be doing that in the street when there’s a sidewalk right there?” I thought. All I could see in the rearview mirror was the back of his head and his stooped shoulders. So imagine my surprise when he turned around, locked eyes with me in the mirror, and screamed “GET THE FUCK AWAY FROM ME”. I was definitely in a hurry to comply, and as we pulled out, Jason informed me that the guy was actually setting up a tea party in the street. But by the time I rounded the block, his tea party was packed up and he was gone, less than a minute later. I’m calling it now: I just had an encounter with a tea-pouring ghost.

* I’ve been using DogVacay to find hosts for Napodog while I’m out of town. His regular hosts, whom I love, were unavailable for this trip, so I chose someone else in the area. This is the first time that I’m less than thrilled with the outcome–I didn’t know when I booked that there would be so many other dogs there. When I dropped him off, there were six, and the host indicated that more would be arriving. The house was torn up and it reeked. I didn’t feel great about leaving him there, but I didn’t really have a choice, and he seemed to be getting along with the other dogs. When I came to pick him up (a bit earlier than I’d indicated I would), they’d had him shut up in the garage by himself. His bark is hoarse, like he’d spent a lot of time protesting something. How long had he been in the garage?  Were they planning on keeping him in there until the time they expected I’d be back? The smell of the house had also rubbed off on him and his bed. I can’t know if they mistreated my buddy but I don’t feel good about it and I will absolutely never bring him back to that host. That’s the thing about DogVacay: you don’t really know what you’re getting until it’s too late, even with reviews, because it’s awkward to leave a negative review publicly for a person and their house, especially if you’re only operating on a suspicion of what went on while you were away.

This Didn’t Deserve Its Own Post: New Mexico Edition