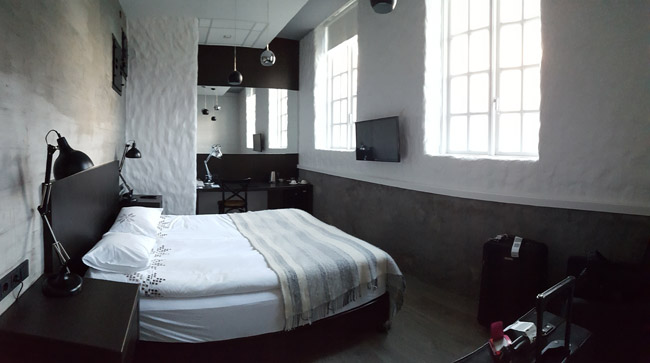 When I take a trip somewhere, if I don’t do a day-by-day recounting, there’s usually a bunch of tidbits left over that I either couldn’t write more than a few sentences about or don’t have any photos for or would drag out the series far beyond what any human could be expected to tolerate.  All combined, however, they make for something a little more substantial, so here’s yet another one, this time about Iceland.

For my stay in Reykjavik, I was booked at the Best Western. I don’t have any particular distaste for the Best Western chain in general–they’re serviceable if not particularly fancy, the sort of place that you maybe wouldn’t be too surprised to see duct tape patching a hole in the carpet. Frankly, I don’t need for my hotel room to be fancy, it’s the place that I crash out for a few hours in between doing more exciting things, unless I get sick and end up spending much more time there than anticipated. Free WiFi is nice, free breakfast is another good perk (even if I rarely avail myself of the option). This Best Western changed my opinion about Best Westerns. I wish they were ALL like this one. For one, the room was super nice. For two, the tub was super nice. For three, free breakfast is a wonderful thing when food is as expensive as it is in Iceland. For four, their toilet flushed with the force of a spectacular waterfall. For five, they have a kind of duvet I’ve never seen before, one that has the power to save marriages all over the world: split down the middle so no one needs to stab a covers hog in the middle of the night. The one area in which I was a little disappointed was Icelandic TV. I don’t know if my hotel had awful reception or what, but I am very much not into the club scene (as I am old, uncool, and disinclined to pay for bottle service) so if I wanted to veg a bit after everything closes at night (earlier than I would have expected), my options were limited. The news channel was frozen on that same frame for my entire visit.

One morning, I got a bug up my butt about going to see the sun voyager sculpture at dawn. I either severely overestimated the distance or underestimated my walking speed and how much I would hustle in the cold, because I got there a good thirty to forty minutes before sunrise. It was so cold, with strong winds whipping icy water up out of the harbor to sting our faces. I spent a good portion of that time huddling in a bus shelter, skittering out whenever I saw something that might be a bus coming so I wouldn’t inconvenience a driver by making him stop when he didn’t have to. A few other people with cameras showed up just before dawn. We were all red-cheeked and hopeful for a spectacular sunrise.  What we got was not the most spectacular one in the history of time (too much cloud cover that seemed like it was moving out of the way but didn’t), but it was pretty damn good, and worth the effort. Afterward, we made our way to the Harpa Concert hall to check it out and escape the cold a bit while waiting for businesses to start opening. I don’t know if this is the case everywhere in Iceland, but all of the public restrooms I used were stellar. Super private stalls, impeccably clean, all with those magnificent waterfall toilets, very unlike, say, the terrifying and filthy half-door stalls at Pike Place Market where you can make shame-filled eye contact with someone outside the stall while wiping, which I would only use if my death by exploding bladder was imminent and even then I would think twice. I like that construction at the harbor is so permanent that they’ve put it on their maps. I have mentioned before that food is really, really expensive in Iceland. One night, sans reservations, we wedged our way in at the bar at Public House. Our meal started off with a shot and a beer, and then we each got a selection of small plates, four each. I got something called the “taste of iceland”, and the two courses I remember were a tiny licorice puffin salad and some lamb stuffed inside a doughnut, the former which was a little weird even for a licorice lover like myself and the later being quite delicious. We both walked out still hungry, and our bill was over $230 USD. Oh, but that wasn’t all. While we were at the bar, a local came in, complaining of the cold, and grabbed each of our hands to show how cold she was. I, thinking this was an opportunity to connect, offered her my already-warmed hot hands packet in addition to a fresh unopened packet to use later, which she was very, very excited about, showing them off to everyone who worked at the restaurant. So far so good, right? Then she started in on a seriously intense speech about how people in Iceland are going to the harbor and killing themselves, repeating to us over and over again “Don’t do it. Don’t do it. Don’t do it.” It was deeply unsettling and I can still hear her voice in my head when I think about it. I’m trying not to think about it. Baejarins beztu pylsur, on the other hand, is refreshingly cheap, and apparently the must-try Iceland place. It’s a hot dog stand that’s been open since the 1930s, and pretty much everyone stops there to eat eina með öllu (one with everything: ketchup, mustard, remoulade, raw onions, and crunchy fried onions). The lamb-based hot dog is delicious, and all that onion makes your breath truly remarkable for the better part of the afternoon. Frankly I don’t care what the hot dogs are actually made of to make them so inexpensive, whether it’s ground up rats with wooly lamb coats or what, I was just thrilled not to spend $60+ on a meal (another reason I loaded up at free breakfast every morning). I’m not sure what Texas-style pizza is but I do wish I had stopped in to find out. Then again, maybe not as their food is decribed as “intestinal terrorism”. If they don’t give you a gun with which to shoot your selection on the menu, I don’t even know what to say. At the hotel, I saw an advertisement for a fish spa, the establishment where a bunch of hungry fish eat all of the gross dead skin off of your feet. This was something I’ve been keen to try for a while, and it’s been banned in the US (as there’s no way to sterilize the fish) so this was my first opportunity and I’d be damned if I was going to pass it up. While it’s true you can’t sterilize the fish, they do have you clean your feet well before you plop them in a tank, washing them and then squeezing on some kind of antiseptic. It wasn’t the super ticklish sensation I expected, more of a pins-and-needles type feeling, except when they squeezed between my toes to get at some particularly tasty foot crud–that was ticklish. My feet were baby soft afterward though that probably has a lot more to do with soaking them in water for an hour and then layering on some thick lotion than the fish themselves. I wouldn’t say that where the fish could hear, though, as I wouldn’t want to crush their tiny spirits. I liked how bright many of the houses were, it made the city feel quite cheerful. This one little pond was absolutely stuffed to the gills with birds one evening. My favorite was obviously this little short-necked dude strutting around like he owned the place. And that wraps up Iceland! The stuff I didn’t talk about really doesn’t deserve its own post.

2 Comments → This didn’t deserve its own post: Iceland Edition