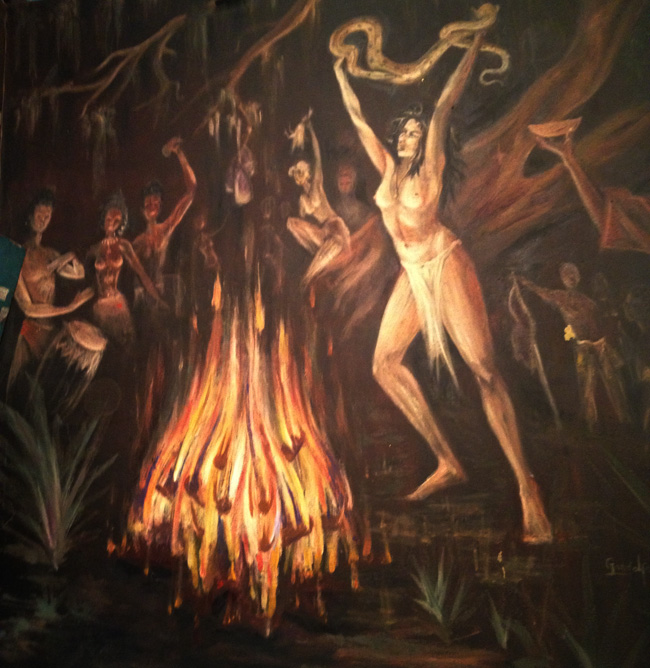 The Voodoo Museum was my consolation prize on my last day in New Orleans. I’d first and foremost planned to visit the Musee Conti Wax Museum before it permanently closed at the end of December, but the timing simply did not work out–we were either doing something else or there wasn’t enough time left in the day for a proper visit. So here it was, the last day of my trip, my very last opportunity, the museum was supposed to be open, and I waited outside. And waited. And waited. And tried to call. And waited. Eventually, someone came to the door and said that the museum probably wouldn’t be opening that day as they were having problems with their electricity. So I suppose it just wasn’t meant to be, although I can’t help but be a bit disappointed about it.

Instead, I set my sights on the Voodoo Museum, a three room museum packed to the gills with altars, gris gris, and just enough information about each thing to pique your curiosity. For $5, we had the run of the place, learning about the difference between Voodoo and Hoodoo (in essence quite similar with some differences–the former led by a voodoo queen and associated with the catholic church, the latter led by a spiritualist bishop in a separate church). That’s right–you read Catholic church. Voodoo as a spiritual practice is often associated with paganism and witchcraft especially as contrasted with white christianity, but Marie Laveau herself was a devout Catholic, ministering to the sick and dying of yellow fever, which plagued the city over the course of her lifetime.

As with all of these niche museums, it’s hard to know what’s fact and what’s bunk. For instance, in one section, they claimed that voodoo was a dancing religion, the purpose of which is to become possessed by the spirits via the transforming ecstasy of dancing, and that the musical rhythms call the spirits down which cause the dancers to eat, drink, sing, dance, smoke, and engage in sexual relations, and that a West African word for sex, jass, is the etymology behind “jazz”, which doesn’t actually seem to be true. So does that make the whole thing about voodoo being the “do it if it feels good, the spirits made me do it” religion suspect, or just the last bit? And that thing about Voodoo being Catholic and Hoodoo not…is that applicable to voodoo in general or just Louisiana voodoo or just Louisiana voodoo post Marie Laveau? Based on my limited internet research, it would seem that it was Marie Laveau who intermingled Catholicism and Voodoo and that people have carried on in her stead since, keeping and discarding the aspects that they personally believe properly align with the faith, which would make my previous statement about the difference between Hoodoo and Voodoo also suspect. I would have to do a lot more in-depth reading to make any definitive claims one way or another about the veracity of any information in the museum. The important thing is that now I know where to buy a zombie whip and how to make a proper voodoo doll.

City of the Dead: St Louis Cemetery No 1