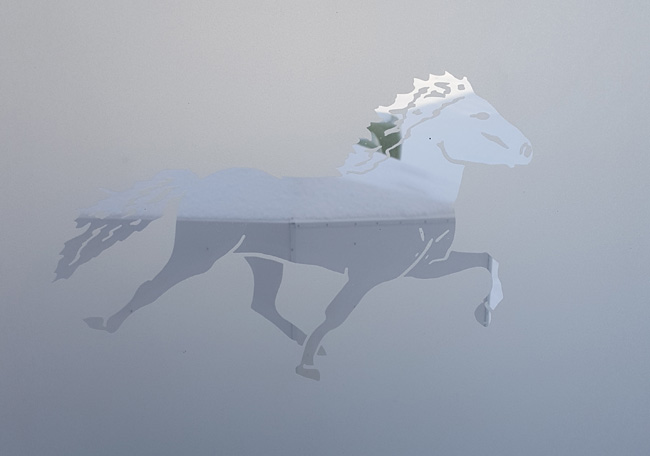 My flight to Iceland departed on a Thursday afternoon and arrived bright and early on a Friday morning. In order to prepare for the time change and make the most of my time there, I thought it was best if I went to bed late on Wednesday, woke up very early on Thursday (3:30am early) and had no caffeine all day so I’d be good and ready to sleep on the flight. I dragged ass allllll day. Then the flight was delayed for three hours due to mechanical problems, so I had to put off sleeptime even further, looking longingly at the airport Dilettante cafe and all of the happy, perky people sipping their delicious mochas. By the time I boarded the plane, I was good and ready to sleep…only to discover that my seat was in the last row before the toilets and thus didn’t have the option to recline even a fraction of an inch. NOOOOOOOOOOOOOOOOOO! The seats in front of me, of course, reclined just fine. Maybe farther than normal, even, because I felt like the man in front of me was practically sitting in my lap. I’m not generally one to feel claustrophobic on planes, but the seat situation coupled with my extreme tiredness was a bridge too far.  Have you ever been so tired that you didn’t know whether to cry or go limp and boneless in despair? That was me, except I was too dehydrated to cry and strapped into a seat with two inches of breathing room in front of my face, there wasn’t enough room for my bonelessness to achieve its full dramatic effect. The flight was just over seven hours and of that, I got maybe two hours of terrible, terrible sleep.

But somehow, that two hours was enough for me to rally once I landed in Iceland. After getting through customs and taking the bus from the airport to my hotel in Reykjavík, Jason and I had only a couple of hours to spend before it was time for the horseback riding excursion I’d booked, and since we couldn’t check into our room yet, instead it was just enough time to fuel up with a sandwich and black coffee at Sandholt beforehand. Our ride leader, Viggó, who looked every inch the tall blonde Nordic gentleman you’d expect from hearing that name, picked us up promptly from our hotel at the previously agreed-upon time and drove us to the Viking Horses stables, where I got to meet my very first Icelandic horses.

Icelandic horses are unique; the breed has spent 1,000 years in isolation after originally being brought to Iceland by Norse settlers. In fact, they are the only breed of horse found on Iceland. No horses are allowed to be imported to the island (no livestock at all, actually), and horses that have been exported cannot return; this is to protect the breed as any new disease has the potential to be absolutely devastating. As a result of their breed isolation, Icelandic horses are much shorter than your average horse, more akin to the size of a pony, but with the strength and stamina of a horse. They’ve got full manes and tails and a double coat to protect them against the weather, and in winter, this means that they are so shaggy and adorable that they can make a full grown woman in her thirties squeal with delight at first sight (I’m talking about me, of course). Their personalities are the best, too–not easily spooked (no predators in Iceland), willing to work, and so flipping sweet they could make a diabetic keel over while they inquisitively nuzzle and nose their way into his coat pockets. This is a horse that moves into a hug instead of backing away and going “whoa there, human, let’s  maintain that personal space bubble, shall we?”. What I’m saying is, I love them. I love love love love them. At the stables, after I managed to tear myself away from the horses, we met the two other people riding on the afternoon tour–some lovely British girls on holiday. We chatted a bit and then it was time to suit up and ride. If you don’t have all the proper clothing, Viking Horses has a great stock of loaner clothing–my fleece lined water resistant pants were stuffed into my suitcase, so I grabbed a pair of their loaners to go over my jeans so I wouldn’t get cold and horsey. When we went back outside, we introduced ourselves to the horses we were going to ride in the pen by grooming them a bit, and then it was time to mount up and head out. This ride marked a couple of firsts for me: the first time I’ve ever ridden in an English saddle, and the first time I was able to get up on a horse without standing on a box (especially impressive because with two pairs of pants on, my leg mobility was more than a little diminished). All of the horses in the group were named after Icelandic features, except for mine, Neo, who was named after The Matrix. I can be trusted to pick out the trenchcoat wearing goth in any given group. Small (even by Icelandic standards), dark, and oh-so-shaggy, I wanted to minify him even further, put him in my pocket, and steal him away. Our tour was the afternoon Mjölnir tour, which is a one and a half hour ride through Hólmsheiði hill and around the Rauðhólar pseudocraters–the deep red iron-rich rocks in the lava fields outside of Reykjavík. It seemed to be a popular riding area, as we saw several single riders and one very large group. One of the single riders joined us briefly, riding one of the most strikingly beautiful black horses I’ve ever seen, and without thinking, I complimented him on his horse in English. He agreed with me in Icelandic, and as ridiculous as this sounds, it kind of made my day that he understood me and I understood him. Not that I would have known how to compliment him in Icelandic, anyway, because I am awful and learned about five words before I went and was reticent to use them in case I screwed up and insulted someone when I meant to thank them. It’s actually deeply embarrassing how well nearly everyone I encountered in Iceland speaks English, when I know that given my five years of Spanish classes, I could barely direct a Spanish-speaking tourist in Seattle to the baño if need be, much less educate them about the geographical history of the area. It was a gorgeously crisp day outside, and the snow crunched delightfully underfoot. On a clear day, you can can see a semicircle of mountains surrounding the area as well as Reykjavík city. It was a bit cloudy during my ride, so no mountains, but it was scenic nonetheless. I was able to pop out my phone on the ride for a few quick shots, but I was primarily concerned with keeping my seat, unlike Viggó who was able to whip around in his saddle and snap photos of the group. While it’s true that Icelandic horses are more comfortable and less bouncy to ride, a bit like a moving couch, when riding English style not only do you have no saddle horn to grab onto if things get hairy, you also have one fewer hand with which to grab since they’re both on the reins. And things indeed got a little hairy–one of the Brits and I were dawdling toward the back of the group, and I decided to try and catch up, which meant passing the other horse, Hekla, named after an Icelandic volcano, also known as “the gateway to hell”. Hekla decided this meant we were racing, and both horses broke out into a gallop and I lost a stirrup, at which point I fully resigned myself to the idea that I was going to go flying off Neo’s back. Somehow, that did not happen and I regained control just before I would have crashed into the rest of the horses, but the shame of doing pretty much everything wrong in those few seconds lingered with me, because shame never really leaves me, it just hangs out in the background waiting for a quiet moment to resurface. Maybe as late as 20 years later. Maybe longer. After we got back to the stable, the horses were unsaddled and they promptly began to roll in the snow, groom one another, and shamelessly beg for human affection. After we’d had enough pats and hugs, we were invited inside for an Icelandic snack–thick skyr loaded with plump blueberries and fresh cream, Icelandic flatbread and cheese, hot coffee, tea, and a slice of dense chocolate cake. We all chatted a bit more and I did my best to not bring shame to America by inhaling everything on the table and making loud, obnoxious jokes…I made softer obnoxious jokes instead. The Brits were on the tail end of their holiday while we were still at the very start of ours, and they told us the trouble they’d had with their rental car; namely that they were unused to driving in snow and went offroad almost immediately, with nothing to dig themselves out. One mentioned her utter loathing of tea and her inability to make a decent cup of it, which surprised me because I thought that was the sort of attitude that got you personally booted out by the Queen while she splashes boiling water in your face and makes a suggestion not to let the door hit you in the arse on your way out, but I guess I was wrong. So far they’d struck out catching a glimpse of the northern lights, and were giving it one last go that night. I wished them luck (a bit selfish as I was also going aurora hunting that night so clear skies benefited me as well) and we went our separate ways, them driving off and Svava, the Viking Horses manager, giving us a lift back to our hotel, but not before recommending several different heated pools we could frequent on our trip. Evidently this is my horseback riding shirt. A bit of light reading.

I researched a lot of different horseback riding companies in Iceland before settling on Viking Horses for a few different reasons–I liked their Sleipnir logo which indicated to me that they embraced their cultural history, their commitment to small group riding (immeasurably better than huge nose-to-tail groups), from stalking a number of website photos their horses appeared to be the cutest (an important consideration), and far be it for me to say no to free lunch. I was ultimately thrilled with my decision to book with them. They responded to my messages quickly, they were so warm and inviting, and it was the perfect start to my time in Iceland. Takk!

Who would have thought a whale could be so heavy? Whales of Iceland