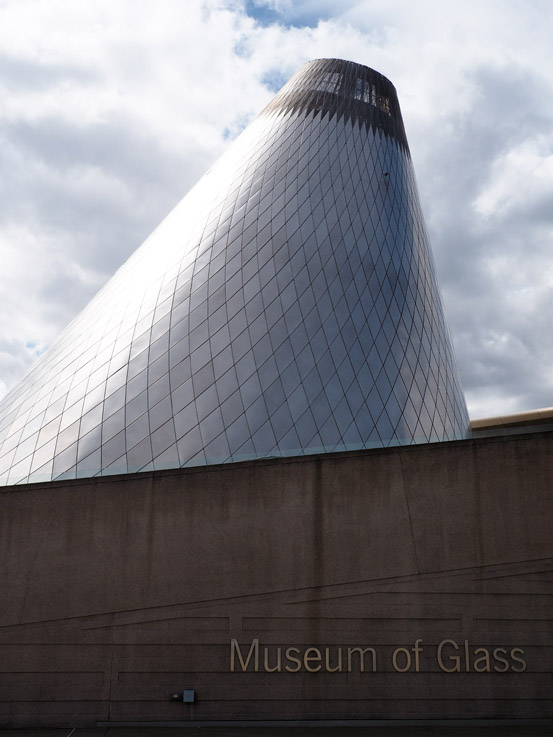 Now that the Chihuly Garden and Glass has been installed at Seattle Center, it seems like Tacoma’s Museum of Glass is being overshadowed, much like Tacoma is by Seattle. Ask anyone who lives Seattle and they’ll tell you about “the aroma of Tacoma” from the paper mills; what they’ll neglect to tell you is that the air actually doesn’t smell anymore. It’s like a game of “he who smelt it dealt it” between cities and the stigma is permanent. It’s unfortunate because Tacoma and this museum have a lot to offer, and yet I know plenty of people who will never go because of zip code snobbery. The Museum of Glass houses a permanent collection as well as special exhibits and (what I consider to be the best part), a hot box, where you can watch live glassmaking demonstrations from a team of in-house glass artists as well as invited guests.  We were there while Joe Cariati was visiting (I’m the slack-jawed yokel who asked about getting burned sometime around the 50 minute mark), and were able to watch the team working on a clear and black-striped vase. It was astounding to me how much work and how many people it takes to create one glass item, which is something I’d never considered before when looking at prices on glass art. This piece is called “You have a coat” which is the opposite of my dog-owning experience: the nastier it is outside, the more likely he is to want to dillydally, sniff everything, and clench his dog buttocks as long as possible. I’m torn on this piece: on one hand, it’s beautiful, and on the other, I’m sad a unicorn had to die. I really enjoyed the “Look! See?” exhibit by Jen Elek and Jeremy Bert. They had a series of displays that were meant to be touched, worn, and otherwise interacted with, their desire being to encourage visitors to think about how they are marketed to as well as creating an active museum experience: art as something you encounter and not just see. You can’t put me in a room with a bunch of light-up moveable letters and not expect me to spell my nickname. Well, maybe you could expect it, but it’s not going to happen. On one hand, I love the way this flame vase glows. On the other hand, I don’t have $925, so I will have to stick to appreciating it from afar. I like that there’s a little window into this glass bird’s brain, intentional or not. I will never for one second believe that the nipples on their watermelon boobies are anything other than intentional.