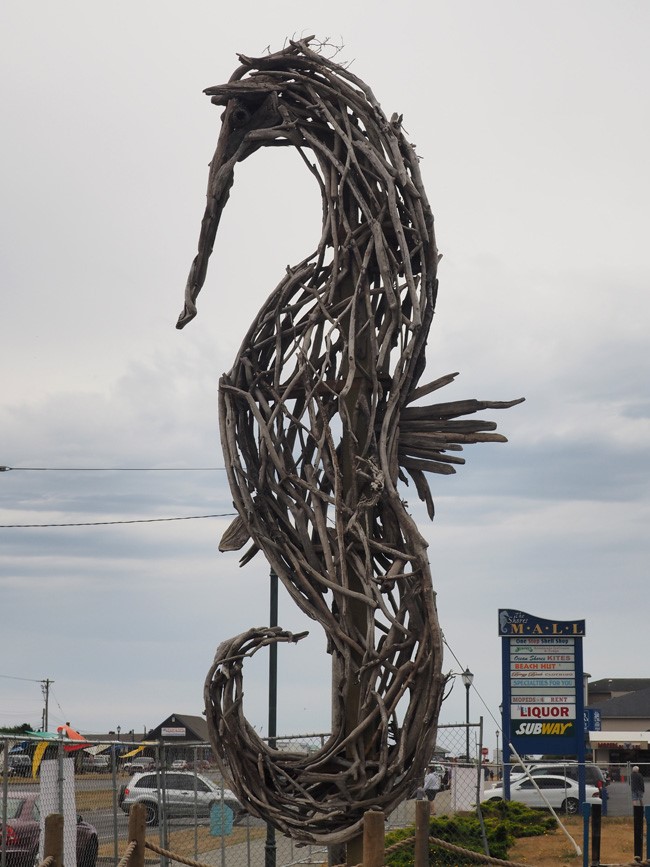 If, as Michelangelo said, every block of stone has a statue inside of it and it is the task of the sculptor to discover it, it can likewise be said that every log of wood has a statue inside of it, and that statue is probably a bear. Either because there are an inordinate number of bears trapped inside logs, or it could just be that people like bears. Either way, I ventured to the Sand and Sawdust fest in Ocean Shores to see what there was to see. There would be woodcarved bears, undoubtedly, but would there also be sand bears? One could only hope.

I first checked out the chainsaw carving area, where the scent of funnel cakes was barely detectable over the more dominant smell of freshly-carved cedar. Almost every vendor had someone chainsaw carving in their tent, sawdust flying everywhere, including (as I am particularly unlucky) directly into my eye, curving around my glasses somehow like the world’s smallest jerk. But oh, the bears. There was also this angry dog. Why are you so angry, dog? Why are your tiny black eyes so full of hate? Why are your eyebrows furrowed and your lips curled into a sneer? Maybe because I ignored his bear friend’s “no paparazzi” warning. There was also this timeless treasure, an heirloom piece for future generations (surely officially licensed by the NFL, although it’s not like the woodcarvers can help it if a Seahawk is stuck inside a log, they’re just trying to free him), and if that doesn’t float your boat, you could also buy a gorgeous wooden Beyoncé. They also had a couple of sand sculptures in the wood carving area, which left me a little confused and temporarily disappointed–two? That’s it? That constitutes a “fest” of sand sculptures? Then I actually walked my lazy ass to the beach and saw that I was, thankfully, so very wrong. Is this a Don Hertzfeldt Sampsans sculpture? Or am I looking at it completely wrong? Just like at Cannon Beach, people weren’t very respectful of the sand sculptures, walking on them, crumbling them, ruining them, just so they could get a few more likes on their instagram photos. It’s gross that they’re so easily able to destroy others’ hard work and still others’ enjoyment, seemingly without any thought about it. But what’s the alternative? Setting up barriers around each creation for the duration of the festival? It doesn’t seem like consideration is coming back into vogue any time soon.

Sadly, there were no bears freed from the sand, but I did find this written in the sand: