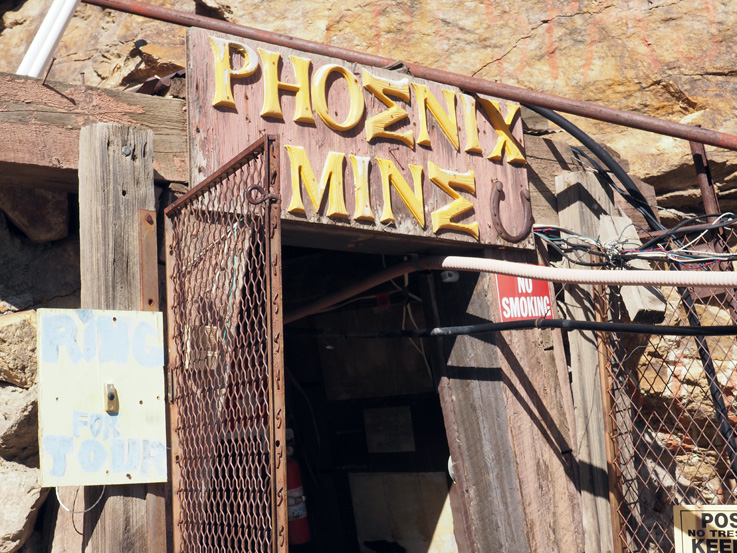 There are a number of gold mine tours available in Colorado, tours being the only way for the majority of them to make money as the old way of extracting ore turned out to be somewhat ruinous to the environment and the legal way is potentially more expensive than the ore inside is worth. Seeing as how our tour of the Phoenix Gold Mine cost us a paltry $10 apiece and the bumper of the mine owner’s car was held on with a C-clamp, I’m going to reconsider my use of the phrase “It’s a gold mine!” when referring to something really valuable. The Phoenix Gold Mine was originally discovered in the 1870s, and has been worked on and off since then, amassing a fortune for at least two separate owners. Only a small portion is open for tours, the rest being too dangerous for public access. Apparently one portion involves squeezing through narrow tunnels on your stomach and I’m panicking a little just imagining it, so even if that part was accessible, there is no way my fat ass would go in there intentionally, because I don’t want to get involved in some sort of baby Mellzah situation. After all, I only packed one extra pair of pants. These support beams are the original timbers used in the 1930s and didn’t make me feel unsafe at all. Nope, not unsafe at all. Nosir. The process of removing gold and silver ore was explained by our tour guide as “scraping the peanut butter and jelly out of a sandwich.” When it’s in the ground, gold pretty much looks like gold as it doesn’t oxidize, but the silver tarnishes and looks black, and copper takes on a greenish hue. What they would extract was not huge nuggets of gold like you might expect, but quartz with embedded gold, which would then be processed to extract the gold, involving breaking it up in drums  with heavy balls and shaking it across triffles with mercury to reduce gold loss. Unfortunately, that mercury escapes and contaminates groundwater, which is why it’s now banned.

Speaking of water, one of the biggest dangers a gold miner could encounter in a life basically rife with danger (mercury poisoning, getting stabbed over claims, tunnel collapse, evil dragons being attracted to your wealth) was the potential of drilling into a vein and striking water, as water doesn’t fuck around and will flood the tunnel and kill everyone. I asked about canaries and I learned that underground fumes are only an issue in coal mining, not gold mining. When it’s not still basically winter outside, you can pan in the river for gold; a number of people have found enough gold while panning to make exciting life changes. Our tour guide told us of one little girl from the Chicago area who found a chunk worth something like $30,000 (I don’t remember exactly), and who insisted upon buying herself a pony. Her father instead worked out a deal with someone in the suburbs to rent a pony and act like it belonged to this little girl for a number of years. When she got older, he admitted what he’d done, but then used the money to buy her a horse as she had outgrown a pony, so she didn’t stay angry with him for long! He said that if we were to pan for gold, instead of looking for large chunks, what we should keep an eye out for is a little glint of light, around the size of “grandma’s stud earrings”, and that once a woman starts panning, she needs to tell herself that she can’t stop until she finds said earring or grandma will be pissed. He said that women are naturally better at finding ore because we’ve been trained to look at jewelry from toddlerhood onward. I don’t know what kind of childhood other women have had, but the only thing I can spot off in the distance is a burger king.

We were not about to be deterred by a mostly frozen river surrounded by snow, as I had visions of ponies cantering across my eyes, so we grabbed a rusty pan and went off to freeze our fingers in the river. …about five minutes was all I could take before my pants were soaked and my fingers were numb. “Grandma is just going to have to deal with it,” I thought, as I waded through the snow back to the road. Then I saw some light glinting off of a rock wall across the road, and the visions of ponies came galloping back. When I got closer, I saw that it wasn’t gold, but it did appear to be metallic silver, so I grabbed a larger rock and elegantly grunted as I bashed it out of the wall. When I brought it back to show off what I’d found, the other tour guide cast a terribly sad look, told me I’d found mica, and gave me a pity rock with gold inside. I didn’t take the hint, and went chasing after the next bit of glint I saw. It turned out to be trash. Cigar wrappers, to be more precise. I guess I really don’t have what it takes to get rich in five minutes on someone else’s property. M’ris and her rich gold strike. They have a number of chipmunks and ground squirrels that live nearby and which get bolder as the season goes on in terms of taking food from tourists. Apparently around summertime, they’ll crawl all over guests to get at the sunflower seeds in their laps. The day I visited, they were having none of it and fled every time I gently moved the pan toward my leg. They really aren’t dummies, I think they sensed what I had planned if I managed to catch one. After our tour and ineffective mining, we stood around and chatted with the owner and our tour guide for a while, both of whom relished telling stories. In addition to the aforementioned pony story, we heard about a mule that killed chickens for fun, about a woman who had sat on and nearly crushed a chipmunk, another kid who found a giant chunk of gold, and flying bombers in World War II. I will generally sit and listen to stories as long as someone has stories to tell, but it was cold out and we were all getting hungry, so we departed to Beau Jo’s for some Colorado-style pizza for lunch. If you haven’t heard of Colorado style before (I hadn’t), it’s a pizza with a large hand-rolled edge which you can eat with honey, essentially making it a meal and a dessert in one. Should I find myself in the area again during more pleasant weather, I am definitely going to try my hand at panning and chipmunk-wrangling again!