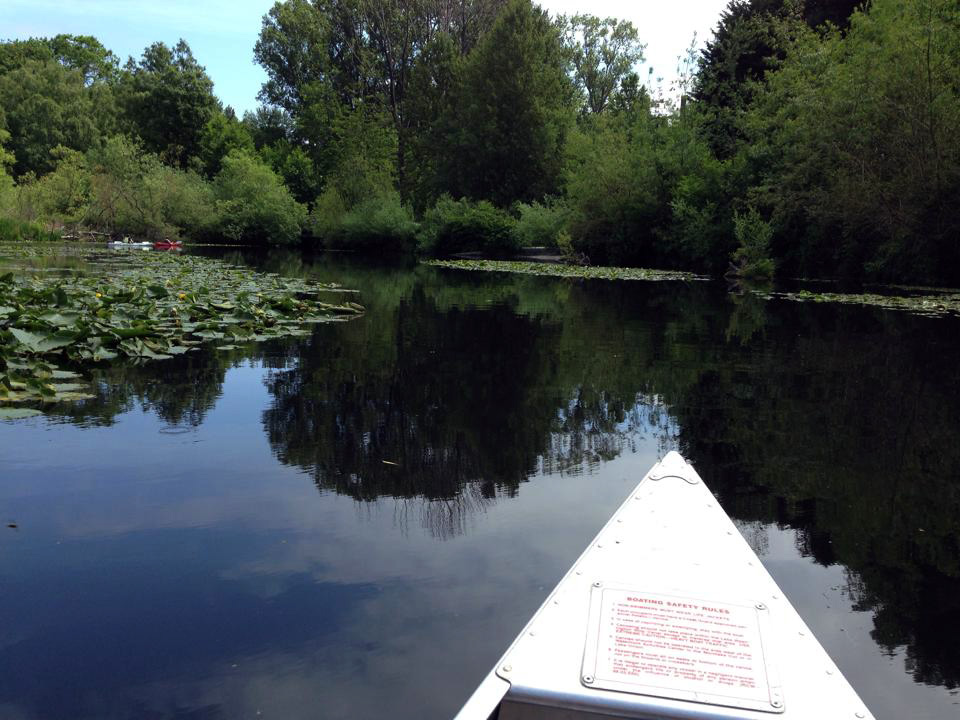 All above photos by Jessica Anderson Seattle is separated from the suburbs to the east by Lake Washington. As such, the area is also home to several floating bridges; in fact, four of the five longest floating bridges are found in Washington state. I still remember the first time, almost ten years ago, that I drove across the Evergreen Point floating bridge: the bright sun reflecting off water that was rough and choppy on one side, and smooth as glass on the other.  Oftentimes, you’ll see canoers, kayakers, and rowboaters paddling around the shore, and recently, I became one of them. The University of Washington’s Waterfront Activities Center rents canoes and rowboats to the general public (and to students and alumni at a discount) by the hour, so a group of us packed a picnic lunch and went paddling. As we were signing the waiver and exchanging IDs for paddles, we were informed that if we knew how to swim, we wouldn’t have to wear lifejackets so long as we kept them in the canoe. I recently read about a study (that’s right, read about the study results instead of the study itself, because I live on the edge) that indicated that less than half of Americans can perform all five basic swimming skills to save themselves: floating or treading water for one minute, jumping into deep water and coming up for air, spinning around in the water and then finding your way out, being able to get out of a pool with no ladder, and swimming the entire length of one standard pool without stopping. Although I’ve never been the strongest swimmer, I’m definitely able to do all of those things, so I figured I was fine to go lifejacketless. Upon climbing into the canoe, feeling it rock wildly beneath me and being faced with the almost certainty of being dumped into the lake, I lost all confidence in my swimming ability and couldn’t strap on the life jacket quickly enough, mixing up a couple of the buckles and looking like a three year old who dressed herself. However, it made me glad I’d thought twice about bringing my camera as I would have been furious if I’d managed to drop it in the lake or otherwise get it wet and break it. The Evergreen Point bridge was closed to traffic during our trip, so paddling around and underneath it felt surreal and almost post-apocalyptic: just us and our canoes among these giant manmade structures that should be bustling with activity. Other portions of the trip felt like we were paddling down the river Anduin, with trees and brambles growing thickly on either side. At least until your husband, who should be steering, gets distracted by ducklings and drives your canoe straight up onto a log where your struggles to remove yourself almost flip the craft. In all fairness, I was distracted by the ducklings, too: they were at peak cuteness, being both fluffy and hand-sized. Our route eventually took us out into the open lake before making our way back to the dock, and aside from climbing in initially and the log incident, this was the scariest part: it’s there that it’s evident just how far you are away from shore, and much bigger craft come barreling through on their way to the Montlake Cut which connects the lake to Puget Sound. Even though we had a 100% success rate in getting out of their way, they still knocked us around a lot with their wake, which left me feeling small, vulnerable, and definitely a member of American Poor Swimmers United.