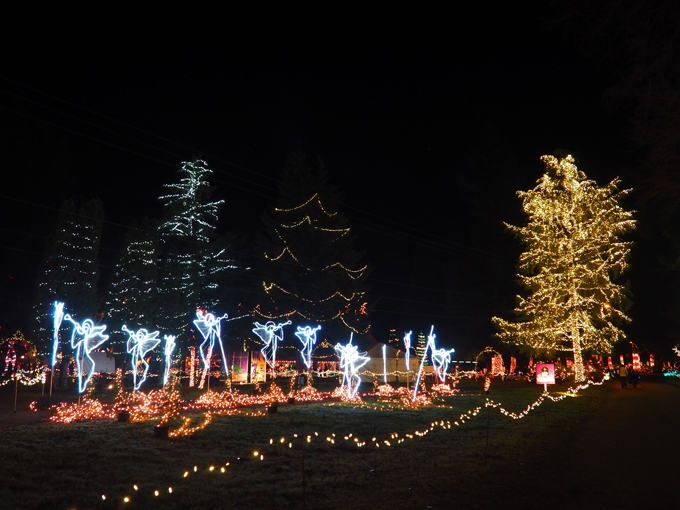 Over one million lights twinkle at The Lights of Christmas in Warm Beach, WA. Having seen a number of places tout the one million number this year, I have to assume that one million is the “stop counting” point for everyone. What I don’t know is how anyone can bill themselves as the largest light display if everyone sort of throws up their hands after the one million mark.  I need to know which is actually the biggest without doing any tedious counting myself. I must see the best, the biggest! GIVE ME YOUR DATA!

Ahem. It’s hard not to feel the holiday spirit when the night blazes bright around you, strains of music hang in the air, and all around is your fellow man filled with wonder and delight. We buy a grease-spotted paper bag filled with piping hot doughnuts crusted with cinnamon sugar and kiss the sugar off each other’s lips. A choir sings carols, conducted by a woman whose elaborate arm and body movements look like nothing so much as airbending.  Children labor as “elves” in a real workshop, and if you have cash, you can hang their fruits on your tree. One eyes me suspiciously as I take photographs. A gift shop hawks Santa-themed wares, including some cheerily painted on gourds. Trees shine so brightly that I have to turn away, dazzled, as the image hangs on my retinas. It’s a festive sort of pain.

One of the attractions at The Lights of Christmas is Bruce the Spruce, their talking Christmas tree. You may not know this, but approximately 98% of your time waiting in line to talk to a tree is spent panicking about what in the hell you could possibly say to a talking tree, and this panic is exacerbated when you overhear him asking other people to tell him a joke. Immediately, you will forget every joke you’ve ever heard, except for the ones that are entirely inappropriate to tell around children, and even then, you’ll only recall scraps of the lamest vaguely dirty Dad jokes, all the while moving ever closer to the front of the line. When my turn arrives, I manage to squeak out a question about whether he was the only talking tree and if he was “pining away” for friends, to which he responded with no fewer than three puns in a row, including bidding me farewell with “Cedar later!” I felt a deep and abiding shame that I had been beaten at wordplay by a tree, and spent the rest of the night constructing ever more contrived puns and sad jokes. Why shouldn’t you be afraid of a talking tree? Because his bark is worse than his bite. What did the talking tree do after he said his first word? Take a bough. What did the talking tree do after he was getting too big for his beeches? He went back to his roots. Why doesn’t a lumberjack make a good bedmate for a talking tree? He spends all night sawing logs. What does a talking tree wear to Warm Beach? His swimming trunk. What’s a talking tree’s best friend? A dogwood. …There were more. So very many more. I stopped counting at one million.

A Walk on Kalaloch Beach

2 Comments → The Lights of Christmas in Warm Beach, WA