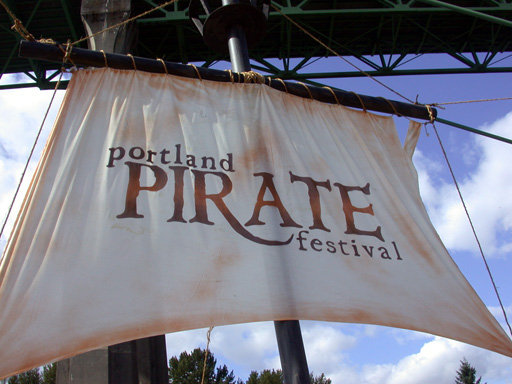 On Sunday, I drove to Portland to check out the Portland Pirate Festival. I’d spent Friday night and most of the day on Saturday sewing a new pirate costume, as much as I love the old one, it’s incredibly costumey and less ‘working pirate’. It seems like a large portion of my time lately has been devoted to costume work–in addition to this pirate thing, I’ve been working pretty feverishly on my Halloween costume. Mock me for my early preparation if you must, but I’m tired of having a costume that’s not as awesome as it COULD be if only I hadn’t procrastinated–last year’s Dark Helmet, for example. That, and my October weekends are filling up rapidly, and I have a feeling that if I don’t start wrapping this up now, I won’t have time later and I’ll have another halfassed attempt on my hands. I think it turned out fairly decent; all it needs is a hat that doesn’t suck, and unfortunately, I don’t have millinery skills. I really should keep an eye out for a cheap sewing machine, though, as hand-stitching takes forever and a day. You can also see the most recent addition to the pirate bathroom–I found one of those hanging hippy-esque door curtain things, took it apart, and attached each piece individually to the glass doors–I quite like the look! I drew a lot of strange looks on the trip down, but my favorite is when I stopped at a rest stop near Castle Rock; an older man (mid to late 60s) asked me what I was up to, and then told me the last time he was in Seattle, some outraged busybody asked him if he knew that an animal had to die to make his coat. His response? ‘Oh no! I didn’t think there were any witnesses…now I’m going to have to kill you, too!’. Too cool. I ended up talking with him for far, far longer than I intended to be at the rest stop; I’d just meant to grab some of the free coffee and keep going, but he was one of those cool grandfatherly types who knows something about EVERYTHING–we talked animals, biology, history, politics, religion, car engine builds and manufacturers–I was fascinated, and suddenly two and a half hours had passed. Shortly before I left, he mentioned that his wife had been dead for fourteen years, and I felt badly for leaving because he just seemed so desperately lonely, like he hadn’t had anyone to talk to for years. I suppose that’s part of life, but it doesn’t seem right to me. Still, I needed to get back on the road if I was going to have time to do both the festival and meet up with hallucinas, so after the gentleman at the rest stop explained to me how the flintlock on my dagger/pistol worked, I bid him farewell and continued on my way to Portland. This piratical stilt-walker is Heather Pearl; she says she figures that she has logged a few thousand miles on her stilts over the eleven years she has been working fairs! I’m pretty sure that just one mile would feel like a thousand miles to me, although if I picked a good pair of stilts, it would be fucking awesome to finally be height-weight proportionate. HAR HAR! This pirate wench was working as part of the Pirate Parrot show; designed to be an educational show teaching the audience not only about parrots but conservation and whatnot. Between shows, people queue to get a chance to hold a parrot, which are surprisingly friendly and even cuddly–so different from the pet store parrots that threaten to take your finger off if you so much as pass by too near to the cage! I could never be 1st mate–I’m disqualified straight off with the ‘extreme patience’ requirement. How could anyone possibly need THAT much patience? Are they dealing with the Pirate Captain (pirate_capt_log) himself? Disheartened, I went to the Rogue tavern for some rum to put me in good spirits again (see what I did there?) and was just in time to watch the pirate with ADD perform like some sort of entertaining monkey for the drunken crowd. Here he is, standing on a ladder of swords, juggling knives, and staring directly into the sun, all while cannons are being fired at uneven intervals. If he’d slipped, he’d be short at least half a foot! This character looks the part so much, I couldn’t resist taking his picture! I left the grog garden just in time to see the Pirates of Puget Sound cross blades to settle disputes–‘this one stole my banana’ ‘this one’s shiny eyepatch blinds me in bright sunlight’ ‘this one ripped my teddy bear’–serious pirate grievances. They fought with real, sharp blades, so anyone who stood too closely to the battle area was quickly shooed away as pirates, much like the amish, don’t carry insurance for that sort of thing. I’d like to take a moment to say that I wholeheartedly approve of the pirates in leather pants trend. WHOLEHEARTEDLY. Right nearby was a pirate puppet show, intending to teach children that stealing is wrong and teamwork can help save the day. Is this a pirate show or some sort of hippy festival? Seriously! I wandered around the marketplace for a while, but nothing caught my eye as a ‘must have’; some things were nice but ridiculously overpriced for something that I could make myself with enough time and inclination, and to my surprise, there wasn’t a decent pirate hat to be found! Felt pirate hats always look crummy and cheap. As I walked by, I couldn’t tell if the above skeleton was a costumed person or just a decoration outside of a stall, and really, really stared at its face to see if I could see eyes–I was so engrossed in my study as I was walking by that when the person inside wolf-whistled at me, I nearly jumped out of my skin. Congrats, skeleton guy–you are part of a select few people who have scared the bejeezus out of me, while hitting on me, even. Hats off to you! After checking out some wares, I gave hallucinas a call, and since she was free, I went over to her house so that we might eat at the Pirate Tavern, home of Portland’s vegetarian pirates. We’ve been planning on going there for approximately a year, so we were full of anticipation and excitement when we pulled into the lot…only to discover that they’re closed on Sundays. Why must you disappoint me, Pirate Tavern? Why? And whilst I was bemoaning their unfortunate hours, the owners came out, just to add a layer of awkward to the mix. Why, yes, I was just standing in your parking lot wailing ‘noooooo’ like Darth Vader, why do you ask? All was well, however, when hallucinas took me out for some super-awesome veggie pizza. Super-awesome, and free, which only serves to make the whole experience even better. While I was there, I also picked up a commission I had ordered from her for my Halloween costume, which looks fucking FANTASTIC. Have I mentioned that my friends are amazing artisans? Because they totally are.

Spotted on the Roadside: Sun Spot, the 20 Foot Tall Dog

10 Comments → The leader was tall, snide, and slim–he looked like a gay Captain Morgan