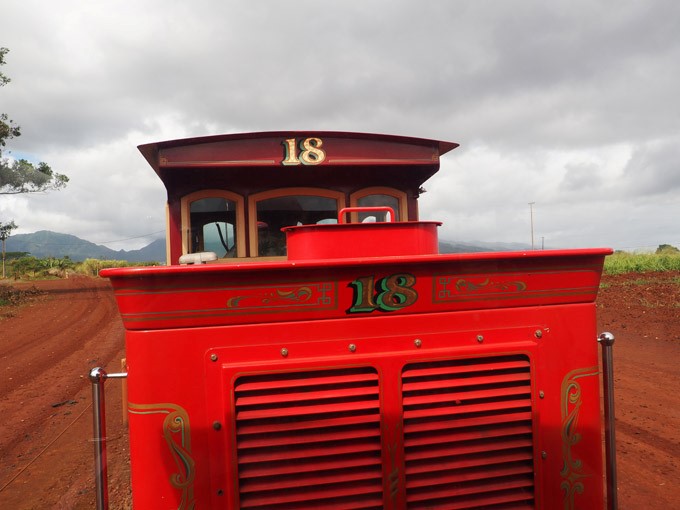 The Dole Plantation is one of those sorts of glorious tourist traps that can only exist when a ubiquitous brand decides to further trade on that brand recognition and help families make each other miserable on vacation. Located in Wahiawa, Oahu, The Dole Plantation has roots all the way back to the fruit stand James Dole opened in this location in 1950. A friend who had visited before described the experience as “worse than hell,” but I was not deterred, and was in fact so eager to begin my pineapple experience that I managed to arrive half an hour before they opened for business. A solitary employee eyeballed our group suspiciously, no doubt wondering how sheltered our lives had been that we were frothing at the mouth to learn about pineapples, and she was right to do so. Before you can board The Pineapple Express, a helpful employee photographs your group holding a pineapple (a rare opportunity, and something you certainly could not do for free at any grocery store in the nation).  With our group of three, it looked like nothing so much as a family outing with our au pair and our pineappley baby. While we were waiting to embark on our journey through time, space, and pineapples, I realized I had seen this train before, over 2500 miles away.  Finally, we were here, at an orchard owned by Dole. The Pineapple Express takes you on a two mile loop through the property, and lasts just long enough to print off your pineapple photos in multiple sizes and formats–about twenty minutes. As it turns out, twenty minutes is a lot of time to fill talking abut pineapples alone, so they took frequent breaks to play music, some pineapple related, some not.

The ride so nice

I’ve fudged the lyrics somewhat because between the frankly godawful static-y speakers that buzzed in and out and the high pitched squeal of the train on the tracks, I can’t be certain of anything I heard on this journey to the center of pineapples. Here are some facts that I may have heard or may have thought I heard or may have made up:

*Pineapples do not grow on trees, but on bushes

*Pineapple plants are all planted and harvested by hand, and the plants are so covered with sharp spikes and a straight “I will fuck your shit up” attitude that harvesters need to wear special goggles and gloves to keep from also harvesting an eye and/or a lot of blood

*After a pineapple has tasted blood, it will never be satisfied with regular iron fertilizers. However, those who are routinely fertilized with blood are also the juiciest, so it’s a trade-off

*The soil in the area is so red because of volcanic ash, and not because of routine blood fertilizing…or so they want us to believe The Dole Plantation is the current record holder for the world’s largest permanent hedge maze, which means that The Berry Barn‘s claim to the same title is straight full of crap. After we paid, we were given maps and admitted to the maze, passing by another rare opportunity to be photographed holding a pineapple. The maze is in the shape of an aloha shirt (again, much larger than the world’s largest), and as the intrepid leader,  I immediately set off for the armpit region. After taking a few turns in the maze, I finally paused to wonder what exactly our purpose was considering the entrance and the exit were the same. Why wouldn’t we just turn around and walk out? What was there to solve? What are those red dots, anyway? Restrooms? Opportunities to be photographed with pineapples? Places they’ve found corpses? Jason proffered the tickets from his pocket, and all was made clear–it wasn’t about finding your way out, but finding your way to specific points in the maze. Whoops. Sheer force of will got us through that maze. All around us was evidence that others had just given up, thrown down their tickets and left, but not us. It was hot. So hot. So much hotter than it was outside of the maze. We sweated, and swore, and took advantage of routes that may or may not have been official pathways, but damn it, we did it. Exactly one hour later, we emerged from the maze, triumphant and desperately thirsty. The fastest time on record for the maze is seven minutes, and I can only assume that not only did that person take advantage of a shortcut or two, but also went at a time where they’d have to dodge fewer double-wide strollers and basic bitches splashing around their starbucks drinks.

Holy hell. It’s hard to describe this vast sea of pineapple products, from pineapple coffee to pineapple chocolate macadamia nuts to pineapple shirts and lip balms and cookies and dog treats and stuffed animals and everything else you never realized existed and still don’t want. There were approximately twelve different pressed penny machines inside the building; I kept turning around and finding new ones. There were like four “pick an oyster” stands on the grounds which is ridiculous. Even more ridiculous was that I somehow got sucked in to one, and let me tell you, if I thought the vendor at the one in Las Vegas was giving me the stink eye for choosing a cheap pearl setting, that was nothing compared to how much they straight to-your-face hate you for buying the pearl and no setting. I’m thinking that the “cheapass crumbum death glare” must be part of their training. All I’m saying is, when you chum the water with coupons, you shouldn’t be surprised when you attract cheapasses.

I expected that this would be the one place in Hawaii where I was practically guaranteed to be able to eat or drink something out of a pineapple. I’d mandated before I left for Hawaii that I would eat or drink nothing that didn’t come served in a pineapple or a coconut, but recanted early in the trip when I realized that meant I’d probably die of thirst on day three. The restaurant did offer one option served in a pineapple–a thirty dollar ice cream split. For thirty dollars for one dessert, I’d better get enough ice cream to fill a kiddy pool and/or it ought to be covered in gold flakes and come with a pony ride. A pineapple that’s been enriched with blood Hotter than hell? Yes. Overpriced as hell? Certainly. Worse than hell? Hell no.