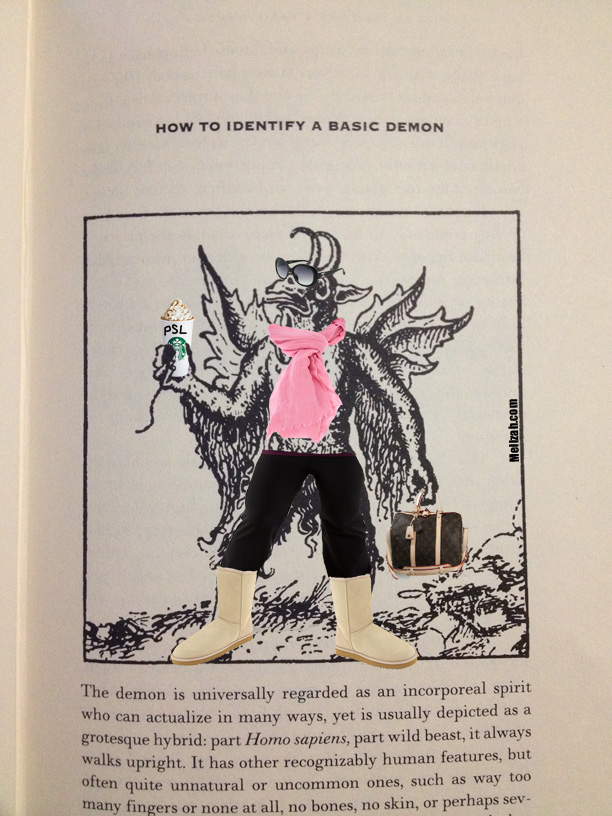 Summoned by reciting Katy Perry lyrics into the mirror at midnight.

Every once in a while, I will troll the clearance section of Half Price Books and bring something home that’s dirt cheap and looks amusing. While there recently, I found yet another book that I couldn’t possibly leave in the store*: A Field Guide to Demons, Fairies, Fallen Angels and Other Subversive Spirits by Carol K Mack and Dinah Mack. You know, another sort of useful, everyday item to have around the house.

Here’s the bad news for you at-home exorcists, demonologists, and aspiring Ghost Adventures cast members: in the guide to identifying basic demons, the book essentially says that anything and everything can be a demon.

Demons, using only their energy, can appear as smoke, as temptresses, animals, grains of sand, flickering lights, blades of grass, or neighbors**.

Now, I would buy that there’s the occasional neighbor out there who is actually a demon in disguise. Demonic possession makes a lot more sense than any other reason I can think of as to why  a former neighbor mowed his entire lawn with a weed whacker over the course of two days in thirty-second spurts. BZZZZZZZZZZZZZZZZZZ. BZZZZZZZZZZZZZZZZZ. BZZZZZZZZZZZZZZZZZ. Either that guy was a demon bent on driving me crazy or he was trying to wipe out his demonic grass infestation. Grains of sand, though? Ain’t no one got time for that. If I accidentally build a demon-inhabited sandcastle, I’m just going to call it Demon Manor and be done with it.  For an identification guide, it’s not very useful. Same deal with fairies:

There is no certainty about their essential form, but the consensus is they are transparent.

Man, whatever would you do without this truly helpful guide?

After the basic introductions to demons and fairies, the book is broken into sections of all of the places that demons can be found: water, mountains, forests, deserts, the home, and the mind. In each section is a smattering of creatures, their history, and how they can be defeated. Once you reach the section about demons of the psyche, however, things start to fall apart as the authors reach further and further for things to include. The Id. Jung’s Shadow. Mr. Hyde. Granted, you are just as likely to run into Mr. Hyde in your bedroom as a tengu or a djinn, but it seems misplaced to include a fictional portrayal of a real mental disorder as a demon you can fight, especially in light of the fact that the mentally ill have long been accused of demonic possession and treated brutally (or even killed) during exorcisms.

I bought this book for a couple of different reasons. I’m deeply into mythology, and I like having books on hand as reference materials for art and for pleasure reading. I wasn’t sure when I bought it if it was going to be a detached compendium of folklore, a painfully earnest guide to demon hunting, or some lighthearted farce. The problem with this book is that it doesn’t know what it wants to be, either. The authors refer to the guide as an essential resource leading one to believe they are in earnest, but then they undermine it with half-assed graspings at things that could only be tangentially related to the subject matter. It’s missing too much to be comprehensive (the authors explain this as making the guide “highly selective”) but at the same time they include things that have no relation to folklore, a “demon” that they blatantly made up, and three different entries on Satan. The result is that it’s hard to use the book as a mythological resource as it’s not clear what is in the actual storytelling history and what they’ve manufactured from whole cloth. Add in the “this is how you disarm and dispell demons” ridiculousness especially as pertains to real mental illness and deep psychological trauma, and the book becomes a hot mess. It would be much more interesting and useful if it was fully a “we believe this is real” field guide or fully a mythological resource, but the half-mocking tone doesn’t serve it either way.

I guess they can’t all be mega-discount winners. Maybe this time the clearance section of Half Price Books trolled me.

*Incidentally, this may lead to my hoarder style undoing, crushed by mountains of my own schadenfreude.

**It’s also possible that this blog post is a demon.

Spotted on the Roadside: No, no, no Bigfoot here, Sergeant.