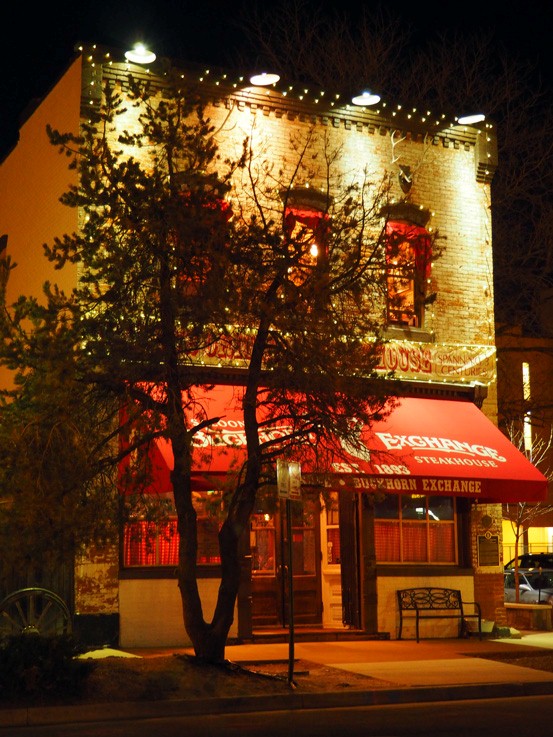 The Buckhorn Exchange is Denver’s oldest restaurant, running continuously for over 120 years. More importantly to the hard drinkers, they also were issued Colorado’s first liquor license. It actually used to be known as the Buckhorn Restaurant; the “Exchange” part was added a bit later owing to the owner’s standing offer to exchange railroad worker’s paychecks for gold and silver plus a free beer and lunch. It became such a popular practice that the railroaders practically stampeded the restaurant every Friday…and the renamed Buckhorn Exchange didn’t lose anything in the bargain, because the thirsty workers were exceedingly unlikely to stop drinking after their free mug was quaffed. Located as they were at the heart of the frontier, a lot of historical figures have rubbed elbows at their white oak bar. We were seated in a section with a significant amount of Buffalo Bill memorabilia and I noted the “Buffalo Bill” drink on the menu, so I ventured to ask our waitress if he’d actually dined at the Buckhorn. She informed me that he was a regular…at least at the bar. His drink of choice? Bourbon and apple juice. Brown liquor and the least tasty of the juices? That’s a hard pass from me, I’m gagging a little just thinking about it.

The Buckhorn Exchange today is first and foremost a steakhouse; they offer most of the standard cuts you’d expect. They additionally offer a variety of exotic meats and what they call “the big steak”, which is specially cut and can be ordered to feed between two and five people. I’m generally of the opinion that a steak is a steak is a steak unless you’re getting a really high-quality piece of beef, and so I usually decide not to pay inflated restaurant prices for steak unless I’m at a place where I’m certain their cows died of happiness (like John Howie). I decided this was a much better opportunity to try something new, so I ordered a split plate of elk and ostrich, with a side of bison bean soup. I would have started us off with some rocky mountain oysters, but there was no way I’d be able to eat even a half order by myself and Jason said there was absolutely no way he would eat even one, so I had to save ingesting balls for some point in the future. That’s right, the thought of apple juice and bourbon makes me gag, but not the thought of eating a testicle. Go figure. Shortly after our entrees arrived, a large party was seated near us; one of the members was a strong contender for biggest hipster douche on the planet. As his friends arrived, he’d loudly make a point of saying “Oh my god, did you see all of this stuff on the walls? I know, it’s so awful! And I’ve eaten here before and the food is TERRIBLE.” There aren’t words for how much I loathed him. I wanted to give him a wedgie that was so hard that it would split him into two hipster halves, only attached at the glasses. Thankfully, our waitress noted his obnoxiousness (or perhaps saw that I was sculpting my mashed potatoes into his likeness and stabbing it with my steak knife) and asked if we’d like to be moved elsewhere in the restaurant. Yes, yes we would. No fewer than two managers came to our table and apologized for moving us; they comped our drinks and dessert, and gave us a Buckhorn Exchange postcard, all of which was unnecessary–they did us a huge favor by moving us, they didn’t need to comp us further! Plus, they moved us to directly underneath the two-headed calf! While nothing tastes as good as free dessert (hot dutch apple pie ala mode with cinnamon rum sauce), the rest of the dinner was good as well, especially the bison bean soup. Neither cut of meat was preferable to beef (and Jason felt the same about his bison steak), but they were both interesting in their own way, particularly the elk, which had an unusual slight cedar flavor. Stuffed to the gills, we made sure that we’d seen everything there was to see in the restaurant, including the original bar, which has been moved upstairs to accommodate diners on the lower floor. Before we left, I hit the restroom and was startled to discover the above deer peering into my stall. It looks much too excited about watching humans do their business. Stop it, deer. Stop it. You’re gross.

Where the buffalo roam?