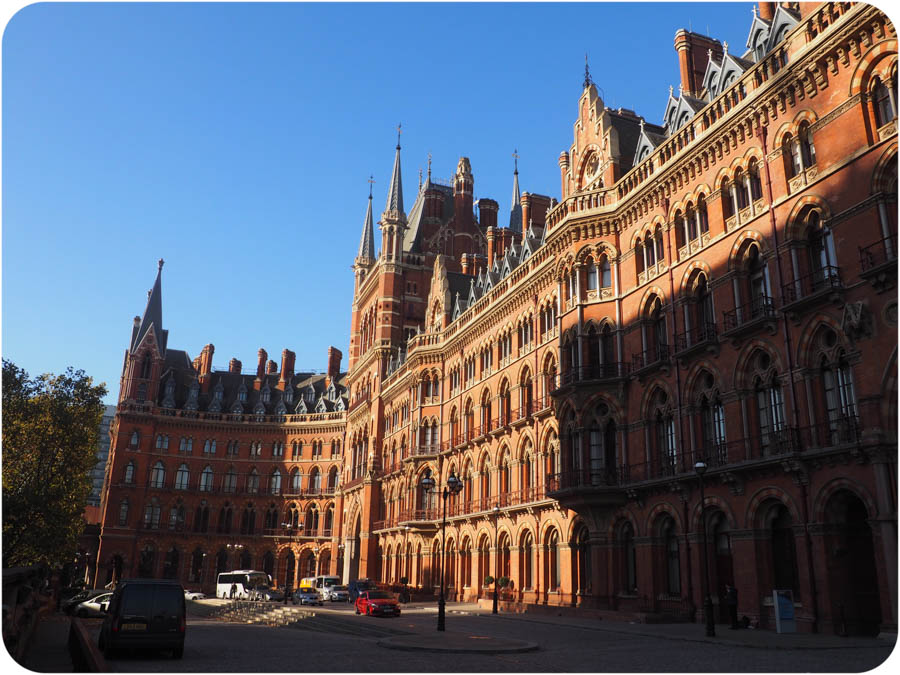 The Meeting Place, by Paul Day I’ve read several critiques of this piece but not one of them bothered to mention the butt-sniffing so I’m not certain they even really looked at it. Our day began at the British Library, where we luckily scored walk-up tickets to the new-at-the-time-and-now-gone Harry Potter exhibit. There were no photos allowed in the exhibit itself and my intention at the time was to sketch a little impression of each room for a more in-depth post but as you can see, that didn’t happen. It’s for the best, though–while a cruddy sketch would have helped to show the larger, Harry Potter specific themes of each room (the floating books and interactive cauldrons and talking herbology pots, there were separate rooms for eight different courses taught at Hogwarts), the true treasures were, of course, books and scrolls, and these cannot adequately be captured via cruddy sketch.

The books were astounding. Even if I didn’t give a single shit about Harry Potter (which is obviously not the case), I would’ve loved this collection– fifteenth century lavish illustrations of plants and their uses, scrolls of alchemical theories, sixteenth century books on mythical creatures… I can only imagine how wonderful it must be to have full access to the books and see what other masterpieces hide inside. This feeling was compounded after we exited the Harry Potter exhibit and made our way to the Sir John Ritblat Gallery, “Treasures of the British Library”, which contained the most beautiful, ornate books I have ever seen. Books bound in fine leather, jeweled books, hand gilded books, one of the four remaining copies of the Magna Carta. Like, a first first edition of the Magna Carta if you know what I mean. Aside from displays such as these, there’s no wandering about, getting lost in the stacks in the British Library as a tourist–in order to read materials, you must first have a reader pass, answer inquiries about what precisely you wish to read, and then best the head librarian in hand to hand combat. It’s furthermore my understanding that current head librarian, Roland Francis Kester “Roly” Keating, though slight of frame with salt and pepper hair and a kindly face, has gone undefeated in 2018*, soundly kicking the asses of scores of scholars unworthy to stand in the shadow of the sole manuscript copy of the poem Beowulf.

Even if you manage to defeat Roly, there is no browsing of the 25 million book archive, as only books you have a specific need for are delivered from a storeroom to a reading room for your on-site perusal. I’m not complaining, it makes sense to keep the grubby hands of the masses off of your national treasures, speaking as someone who once found a slice of cheese that had been used to mark someone’s place in a library book. But as a browser and a looky-loo, I do have to say that I wouldn’t have minded a peek at a storeroom. I had to satisfy that urge by wandering through both gift shops, and ultimately left with a slim volume on the nature of an aspect of the English language. From the British Library, we began to walk in the direction of Ye Old Cheshire Cheese to meet one of my friends, who, incidentally, works in the library field. En route, I was pretty taken with this hotel’s mint green scalloped spires. Fun fact: the boxy chain hotel next to a grody strip mall in my town with an Expedia review of “I checked in and I saw a few bugs on the wall so I just killed them and was like whatever” has a higher nightly rate than this lovely one that’s kitty corner across a park from the British Museum, and this sleepy Seattle suburb has nowhere near 8 million items of historical significance. That’s even taking into account that our library is the place of the aforementioned cheese slice incident, but they haven’t even bothered to properly display this relic for future generations to appreciate. A shy block and a half from the British Museum lies the Atlantis bookshop, an independent shop stocked to the rafters with books on magic and the occult. Fun fact: every book you buy from an occult bookshop can and should properly be referred to as a “tome”. Just please refrain from sprinkling extra ‘k’s into your spelling of magic, that privilege and responsibility is reserved for 9th level warlocks and renaissance fair vendors. When first we arrived, there was a sign on the door informing us the owner had stepped away to make some tea and that felt like the most British thing that had happened the entire trip. Once she returned, Jason and I both found some really interesting books–my favorite was an ethnobotanical look at the oldest yuletide traditions and how they were transformed into the symbols we use today. Spoiler: the image of Santa Claus is deeply tied to magic mushrooms.

Heavily laden with bags of tomes, we continued our walk to Ye Old Cheshire Cheese: I love a good fancy gate. This is basically what I want my backyard to look like. We went inside to see if we could witness any justice being dispensed but alas they’d all sodded off to powder their wigs already. You know why I took this photo. You know. There’s been a pub at this location since 1538. It’s been Ye Old Cheshire Cheese since 1667, rebuilt on site after the great fire of 1666 tore through a huge swath of London. Since then, it’s been a popular haunt of a number of writers, including Charles Dickens and Mark Twain. It does have a funky appeal with its short ceilings and narrow staircases that rather give one the impression that they are sneaking off to do something a bit illicit. Not like, secret underground street fights illicit, more like you’re going to a party that you heard about from a friend’s friend’s friend and they said that they heard from a cousin’s neighbor that there was, like, a mummy there and nobody knows if it’s a real mummy or not but you’re pretty sure you want to look at it.

Jason and I arrived early, winding deep into the cellars to grab a table and wait for my friend and her partner. While we waited, we had a pint, looked at our new witchy tomes, and chatted. After they arrived, we had some more pints, and witnessed the baffling concoction that passes as “nachos” at Ye Old Cheshire Cheese (I blacked it out from my memory but I’m pretty sure the salsa was just ketchup or maybe there were pickles in it? The other food was fine.). That night I also learned that it takes me only two pints to slide right into a faux British accent and not even know I’m doing it.  Jason told me that I’d done it later and I was horrified because I’ve heard my fake British accent sober and it’s terrible. They were both absolutely lovely people and were kind enough not to mention or take visible offense to my slight Madonna turn. This is just like in junior high when I sat next to the new girl who’d just moved to the area from Georgia at lunch and fifteen minutes and a Little Debbie later I uttered my first y’all with a twang.

We drank and chatted, and on our way out, we took a double decker bus back to King’s Cross, which is where Jason and I had started the day. This was my only bus ride because while I got the hang of the tube easily enough (there are maps everywhere, what’s not to get?), I feel like I have to have some sense of where I’m going when I’m on a bus lest I get off at an entirely wrong place and get so lost that I have no choice but to settle wherever I wind up. I feel like the biggest country bumpkin in the world to be excited about riding a bus, but they’re so damn iconic y’all. Cheerio!

*This may or may not be true, there’s no way to check it without library access and foolishly I didn’t bone up on my mixed martial arts skills before visiting.