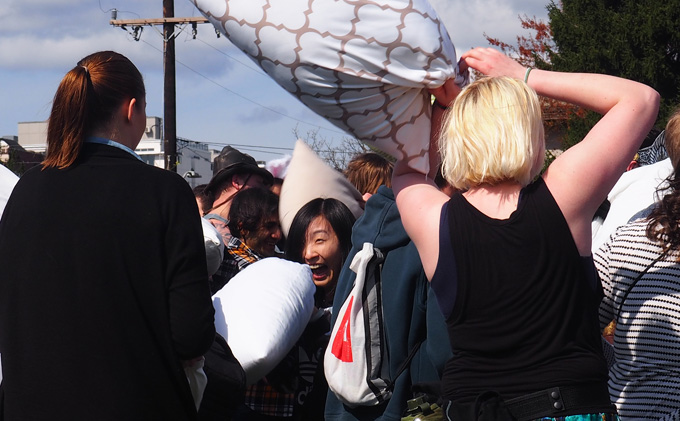 This past Saturday was International Pillow Fight Day, a day to gather with your fellow humans  and pummel the hell out of each other. Like the Seattle Cardboard Tube Duels, the mayhem went down in Cal Anderson Park. The rules were simple: bring your own pillow, and try not to hit anyone with a camera. Face shots? Acceptable. Groin shots? Acceptable. Ganging up on Pikachu? Acceptable. Unlike the cardboard tube fight, the kids were super into pillow fighting. I saw one girl run by, her face twisted with concentration, screaming “GET HIM!” with almost primal fury. It was like Lord of the Flies out there.

I split my time between taking photos and engaging in tactical pillow warfare. It was a strangely uplifting experience, raining blows down upon others and having them returned in kind. There was a lot of concern before the event about the post-battle cleanup, but from what I saw, the pillows held up really well so there wasn’t much to clean up. And all of the pillows in good shape were donated to Compass Housing Alliance afterward!

The Georgetown Carnival in Seattle, WA