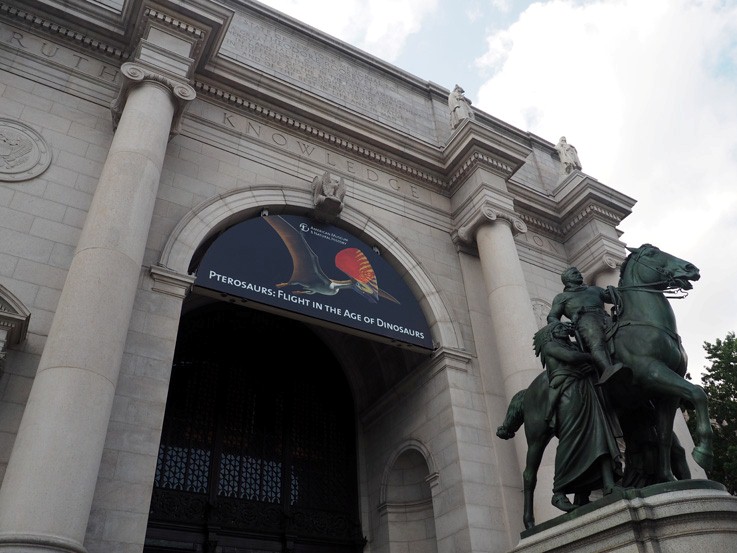 One could easily spend an entire day seeing everything there is to see in the American Museum of Natural History in New York City (or longer, hence their overnight visits!), which is why, of course, we only spent about two hours there and bemoaned the fact that we couldn’t see more. Since my energy levels were low due to the plague, I had to carefully choose which things were most important for me to see, and thus we had visited The Cloisters earlier in the day which didn’t leave much time for AMNH. But I’d rather see part of a museum than none of it!

Since we knew right off the bat we wouldn’t be able to see everything, we narrowed it down to the halls that would have the least overlap with museum visits we’d done recently: The Hall of Biodiversity, The Milstein Family Hall of Ocean Life, The Hall of North American Forests, the Arthur Ross Hall of Meteorites, the Morgan Memorial Hall of Gems, and the Harry Frank Guggenheim Hall of Minerals. We also took a peek at the Gardner D. Stout Hall of Asian Peoples on our way out, and passed through the Akeley Hall of African Mammals on our way in. Mainly, we skipped out on fossils and the center for Earth and Space even though planetariums and dinosaurs are my jam. The Hall of Biodiversity was insanely awesome. It features more than 1,500 specimens and models, showcasing both the diversity of life on Earth and the threats to that life, including a timeline of the five previous mass extinctions. More than any museum exhibit I’ve ever seen, it serves as a call to action to guests to do what they can to preserve the variety of life teeming around them as each creature plays a important role. The Milstein Family Hall of Ocean Life features, in addition to a 10.5 ton model of a blue whale suspended from the ceiling from a relatively small anchor point, some of the diversity of life in the sea, from the shores to the deep oceans. The quality of these displays are top-notch: if you can close your ears to the people around you, it’s almost like you’re underwater with these creatures. They also feature a squid vs whale sea battle, though it’s far from being the largest in the world. The Life of the Forest Floor exhibit shows how terrifying it would be to be insect size. “Honey I Shrunk the Kids” doesn’t even begin to touch on the nightmare world beneath our feet. I don’t even like centipedes at centipede size. Centipedes the size of a horse? Kill me now. Up until The Hall of Meteorites, I was really impressed with the attention to detail and the care given to the museum’s subjects: to display them in a way that’s interesting and relevant to the modern viewer. However, some of the latter exhibits we visited have begun to show their age, the Earth and Planetary Sciences Halls in particular. The Hall of Meteorites is the only one that appears to have been touched since the 1970s; everything else has a display quality on par with the mineral exhibit we saw in some guy’s backyard near House on the Rock. Stained carpet everywhere, dusty exhibits, exhibits falling apart that haven’t been tended to, and a “wet paint” sign for paint that’s so old that the wall has since been scraped and chipped again. I know that minerals aren’t the most exciting subject, but there’s got to be a better way to display them than ringed in carpet. Overall, we enjoyed our visit to AMNH, and I think it would definitely warrant a repeat visit should we find ourselves in New York again. I just hope that some of our admission fee was earmarked toward updating some of the lesser-loved exhibits so that the museum can be truly distinguished in every way.