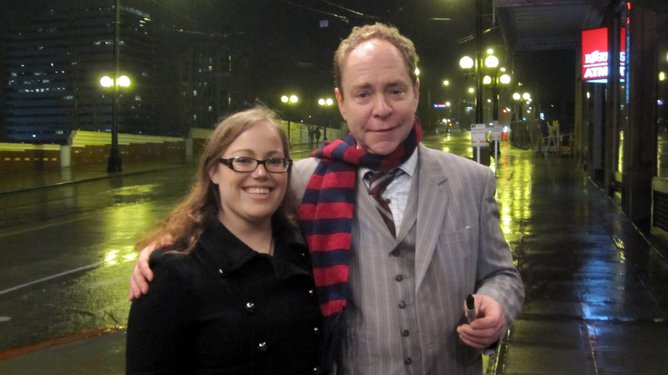 On Saturday, Jason, Amy and I went to see Penn & Teller at the Paramount theater. When I first saw they would be in town on the Paramount sign, I squealed and very nearly drove off the road in my excitement–they hardly ever tour, and come to the Pac NW even more rarely; this was their first show here in more than a decade! Sure, I COULD go see them in Vegas, but that would require more effort on my part. A lot more.

As it was, we put in the bare minimum effort possible and didn’t bother to make reservations for dinner anywhere as none of us thought getting a table near huge shopping venues during the busiest shopping season of the year would be an issue, which meant we spent some time wandering around looking for somewhere that didn’t have people stacked out the door, and ended up eating at a restaurant simply called “Mexico”. The food was indeed vaguely Mexican, which meant delicious margaritas for all.

After dinner, we went to the theater and found our seats. Amy and I were on the fourth row in the second mezzanine, which was pretty ideal in terms of being able to see the stage–had even a basketball player parked himself in front of me, it’s unlikely he would have blocked my view. However, we were seated next to The Amazing Crow Woman who could not be merely satisfied with laughing and clapping, she had to caw like the world’s largest and most obnoxious bird. There’s always one. And that one is always next to me. Well, this time there were at least two, because after the show, some dude who just stepped out of mom’s basement and away from his collection of serial killer fingernail clippings for the first time in a decade tried to strike up a conversation with us. I’m not quite sure where his goggles were, but his conversational skills included a vacuous stare and a spit-filled pronouncement of “I liiiiike maaaagic”. He then proceeded to ask Teller to sign the backs of his credit cards.

The show itself was wonderful–they did some tricks I remembered from when I saw them in 2005, but also added quite a few new parts to their performance. I tried NOT to be drooly goggle-eyed boy when I approached them, but I swear to you it was difficult, because I adore Penn and Teller in a way that’s probably not entirely healthy. Nonetheless, I don’t think they had a conversation on the plane on the way back home about that frigging weirdo chick they met…I hope. The Georgetown Carnival in Seattle, WA

Spotted on the Roadside: Vac Shop in Seattle, WA

30 Comments → “Ten minutes and not ONE person has said ‘LET HIM OUT!’. This is why I love Seattle.”