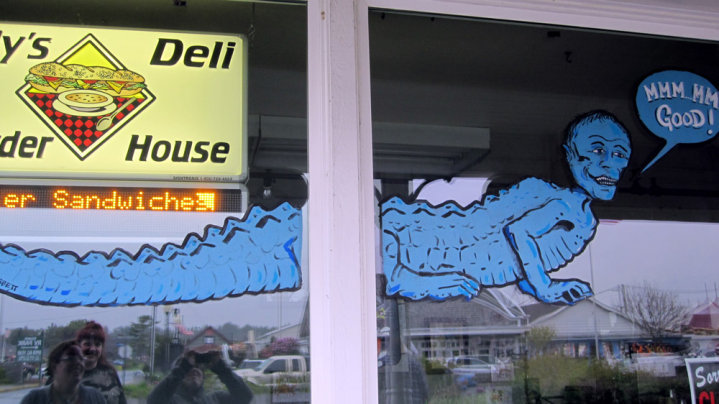 After stuffing ourselves sick, we drove to Marsh’s Free Museum. If you’ve ever gazed upon a piece of tacky merchandise so wondrous you never knew how you lived without it, you know what it is to be in Marsh’s. Marsh’s schtick revolves around Jake the Alligator Man, a poorly taxidermied monkey/alligator hybrid which has been featured prominently in the now-defunct Weekly World News, the only paper brave enough to tell us the truth about Bigfoot abandoning his children and Mrs. Bigfoot having to hook to buy diapers because her babies crap like a man. I may have, in my youth, read a story about this self-same Alligator Man and wholeheartedly believed it, because why would anything with ‘News’ in the name lie to me? News flash: I am naive. Marsh’s treasures hail from a different era, a time when we needed machines to mold things for us. Today, in the Pacific Northwest, things like bread and window sills and underarms manage to grow mold without aid. Truly, we live in the future! Do you suppose the cotton is magic? Or is magic corporeal now? What do magic boxers do? Is the fit magic? Do they lend magical properties to objects around them? Magic asses! Think of the possibilities! Of course, if you want to be a true stud, you will wear a studded t-shirt. There’s even danger inherent in wearing it! Nipple burn, or something! What is this I don’t even Jake himself is trapped in a lackluster glass case. I, for one, believe he should have some neon flashiness, a little more glittery Vegas-style sheen to him. At least give him a hat appropriate to the season!   …Like this one. Appropriate for all seasons! Yes, that is totally a two-headed alcoholic snake and not some doll heads propped upon a turd. Racist or delicious? Both? Jesus Christ that lion has hemmorhoids, get in the car! I brought home with me three amazing new things: a rad poster, an alligator head, and a skullfuck pirate to go with the blowjob pirate I sadly didn’t buy last year which has now been sold and I will have to make my own because my grand new plan for the pirate bathroom (now quite different from the pictures but whatever) is to have a shelf with “Pirates You Can Stick Your Dick Into: The Series” which requires at bare minimum three pirates: A Skullfuck Pirate, A Blowjob Pirate, and an Earfuck Pirate. These are the sorts of things one can do with their apartment when it’s conceivable that no family will ever come to vist, ever again. After we got home from Marsh’s, it was time for a marshmallow gun war. It started earnestly enough with Emily standing patiently with her mouth open, waiting for a delicious marshmallow to land inside. It ramped up when she got popped in both eyes, particularly so when we discovered that velocity and sting to recipient increases if we wet the marshmallows just slightly, and that we could load several into the barrel for a scattershot effect. Marshmallows went EVERYWHERE. Down the stairs, behind picture frames, inside the decorative brick-a-brak, into the fireplace, behind the television, between the couch cushions…everywhere. The firing squad versus the willing victim. After that marshmallow war was cleaned up, we settled in to watch Orgazmo and play the associated drinking game: drink every time someone says the word ‘Orgazmo’, ‘Heavenly Father’, or ‘Jesus’, which means we got loaded. A few drunk folks (no names, ahem) discovered that you can make really awesome sea lion noises through a marshmallow gun. Particularly in the wee hours when everything else is quiet enough to allow your bellows to truly reverberate. It was only after we’d stopped making damn fools of ourselves that we realized there were people attempting to sleep who were planning on getting up early the next day to leave, so we attempted quiet peace offerings. After all the excitement and running around, we all felt quite awake and settled in to watch another movie, during which we all passed out on our respective couches. Thus endeth day two.

Spotted on the Roadside: No, no, no Bigfoot here, Sergeant.

12 Comments → “Tell me when you’re sick of having your mouth open and I’ll be the hole.” (part two)