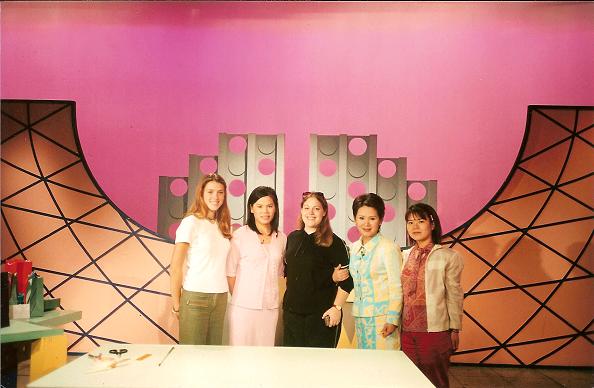 Once you’ve been accepted as an exchange student, they pound what they call the ‘Four D’s’ into your head. Repeatedly. With mallets. These Four Ds were:

No Drinking No Driving No Dating No Drugs

By the end of the year, each exchange student had broken at least one rule, and some came up with even more creative “D’s” to subsequently break. My favorite was “No Ditching School” and I broke it on a regular basis come January. But of course, the very best and most important D was “Don’t Get Caught!” which we also perfected. Shortly after I arrived, CP Su Mei decided she wanted to take Diane and I to her tv studio to watch her tape a show. She’s very authoritarian, so it was funny to watch the contrast; so sweet on tv, SO overbearing in life. Her show is mostly how to wrap presents in creative ways, how to arrange your scarf, how to arrange flowers, that sort of thing. Hence the nickname “Chinese Martha Stewart”. I don’t think she had any shady stock dealings, though. At least as far as I can tell. After the taping, we pranced around the set like idiots. In pretty much every picture I have of myself with CP Su Mei, she’s gripping my arm very tightly, almost as if she senses I wish to escape. I am, of course, thrilled about another opportunity to make a stupid face and have someone take a picture of it. CP Su Mei, and actually, most of our host families and Rotarians, and anyone we met, wanted to take our pictures. Su Mei was definitely the biggest offender, at least for me. “Here’s this fountain, take a picture by it.” “We are at a hotel, let’s take a picture in the lobby.” “We’re having a meal, let’s take a picture.” “I just bought this knick-knack. Have your photo taken by it.” So here is my photo in yet another hotel lobby. This was taken a couple weeks before she had my hair straightened, because ‘curly hair so ugly’. After the mandatory hotel lobby photograph, she gave Diane and I free rein with the camera to do as we pleased. She ended up with a camera full of pictures like this. We apologize for nothing! While we were in cram school, we took a trip to the zoo to learn animal names. This field trip of sorts took place on the hottest day known to man. I’m pretty sure that if I’d laid on the ground, the Rotary could’ve served Pure Plum Blossom Bacon for dinner. Which probably would have been delicious. It sounds delicious to me…but then again, I haven’t eaten since yesterday so my tastes could be a little…off right now. From left to right, Priscilla (aka Pri, Priu, Piriquita Voadora from Brazil), Maria (Russia), me, and Jessica (Peru) and Eva (profile, Germany) desperately try to cool off in the sweltering heat. Marie (France) tried to save Diane (France) from this totem pole while at the zoo, but eventually said ‘Fuck it, I’m hot’ and left Diane to her terrible, wooden, splintery fate. This picture came straight out of the yearbook Beth & I assembled, but I’ll talk about that in great detail in some future post. The next week, we all learned to make dumplings. Hen hao chr! Emilie (France) poses as if she were going to be in a 7/11 ad for dumplings. Note: 7/11s are EVERYWHERE in Taipei. EVERYWHERE. Sometimes two will open right next to each other, and yet this doesn’t seem to have posed a problem. Much in the same way that there are 3 coffee shops in any given 4-corner intersection in Seattle. Instead of go-go taquitos, they have 100 year eggs. Instead of slushies, they have flavored milks and yogurt drinks. Nachos, no. Chicken feet, yes. We loved 7/11 because they always had clean, free chopsticks. Oftentimes we would buy food from a street vendor (Street dumplings are damned delicious. If I had a guy selling dumplings on the sidewalk in front of my apartment, I’d never have a reason to go to the grocery store ever again. EVER.) and duck into the 7/11 on a 007 mission to escape with chopsticks. If you’d like to learn how to make dumplings yourself, my friend Felix has documented the process. The next week, we went on another field trip to the National Disaster Museum/Science Center. Here we learned how to perform CPR, fight videogame fires, use electric escape ladders, and the proper technique for dealing with an earthquake. Apparently the proper way is to duck and cover yourself with some sort of fashionable oven mitt. We didn’t necessarily believe in doing things the proper way. There was screaming and flailing, and I believe some murder/rioting/looting going on during the course of the two-minute drill. Bad exchange students! Bad! bethy824 escaping on a motorized ladder. A couple of months after I arrived, one of Aunt Tracy’s relatives came from the states to visit. I’m still not quite sure what their relation is–I believe she said he was the son of her ‘cousin-brother’ which confuses and frightens me. Regardless, Dave was awesome. AWESOME. He hails from Memphis, TN, and many a day we would go to the roof of the apartment building and he’d teach me Tai Chi Sword AND swordfighting. That’s right, swordfighting. I think even MY coolness level went up a point or two now that I’ve made you all aware that I know how to gut a man like a fish. After I moved in with my second host family, I rarely saw Dave anymore–I was busy doing stuff, and he was teaching English and motorcycling off into danger. I haven’t talked to him in years, and I don’t have a way to contact him, but I’m hoping that even with the size of Memphis, that perhaps someone in the largish Memphis crowd on my friends list recognizes him. He’s into cyberpunk, and Heinlein, and all sorts of nerdy circles, so I wouldn’t be too surprised if paths have crossed at some point. Does anyone recognize him? Also not long after we arrived came the discovery of Hsimen Dean. This was the quote unquote ‘young people’s shopping area’ and it was filled with trendy clothing shops, places with ke ai (cute) merchandise, and a million billion sticker picture booths. This picture was taken way back when Max actually still hung out with us, even if we were a ‘little bit stupid’. The other guy in the picture is Lucas Brasil, who was on a different exchange schedule than the rest of us–he was January to January. So he was long done with cram school by the time we arrived, and was already in a Taiwanese high school. He was upset with our group for a while because we weren’t as ‘adventurous’ or ‘bad’ as the group that had just left…but we were new. We didn’t know the limits yet. This one guy did more to push us to the dark side of exchange than any other factor. We, in turn, corrupted the new batch who arrived in January, and I’m sure they did their part to carry on the tradition after we all left.

Much in the same way that people here get tattoos of Chinese characters that they mistakenly believe mean ‘Darling Angel’ when it actually means ‘Goat Testicle’ because Chinese looks ‘cool’, the Chinese print English words all over their clothes and stationary and business signs and 9 times out of 10 it won’t make any sense.