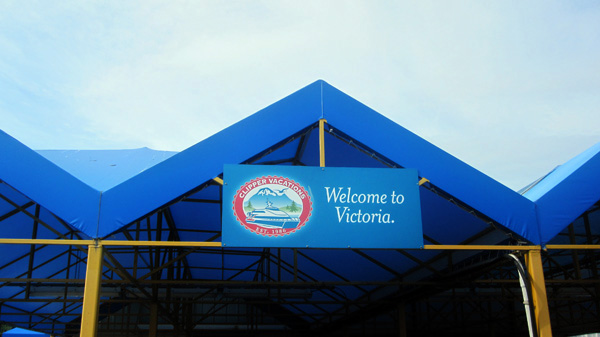 Way back when my dad was in town, we took a daytrip to Victoria. This entailed getting up at an ungodly early hour in the morning to take a long ride on the Victoria Clipper to our destination. We were all a little overtired and punchy, and thus took to telling hilarious stories and became THOSE cackling people. The glances we got from other passengers were signs, I’m certain, that they were envious of our free spirits, and not “sweet jesus, please shut up” death glares, though I have been known to be wrong from time to time.

Although none of us had eaten, we decided we’d be sorry if we ate aboard the Clipper, as the inclusion of Craisins with every meal was a sure indicator that everything there was terrible. By the time we arrived in Victoria, we were quite hungry, and we voted that our first task upon arrival at the Butchart Gardens would be to cram some food into our faces. Unfortunately, before the gardens came a bus tour of the area. An incredibly boring bus tour. If you think listening about politics in your country is boring, it’s even more boring listening to a conservative nutbag bus driver go on and on about taxes and public spending in some OTHER country. Every time I would get a pleasant nod going, he’d hit the brakes and I’d smack my face against the seat in front of me–I’m guessing this is a technique he’s developed over the years to ensure people listen to his awful jokes and rambling bullcrap.

By the time we arrived at Butchart, we practically fled off the bus. There were a few different places to eat inside the Butchart Gardens. We immediately decided against the cafe as none of their premade cold sandwiches appealed. We made our way to the next place…and the menu was exactly the same. Apparently, crummy premade cold sandwiches were our destiny that day, though we did manage to avoid Craisins. Seriously, does anyone eat really eat those? They’re like tiny wrinkly balls of tastebud poison! The Butcharts were cement barons, which is not quite as grandiose sounding as oil barons, but at least a half step up from styrofoam baron or balsa wood baron. Upon exhausting a limestone quarry on their property, Jenny Butchart used her gardening hobby to spruce up the place, creating the sunken gardens. By the time we got to the Asian gardens section, I was feeling more awake and clever, so I began to play tour guide. However, since I didn’t know what I was talking about, I made things up. “Over here, you will see the rare Japanese “luminous blossom”; these are native to the southern regions, and, via the process of photosynthesis, they are able to convert light into clean, usable energy. However, the oil lobbyists have grouped together and convinced Congress to ban their import into the United States.” A few tourists I didn’t know had been listening to my spiel, and when they looked over my shoulder to where I was pointing, they realized they’d been had and laughed when they saw I was indicating a raised electrical plug. I’ve used this “just make something up that sounds halfway believable” method before, especially when I worked retail. I vividly recall working a cash register on a busy day at World Market when a customer asked me what made the candle scent “Mexican Pumpkin” instead of just pumpkin. I told her with an absolutely straight face that pumpkins grown in Mexico tend to have an earthier, spicier scent profile than those grown farther north. She completely bought it, and every once in a while I wonder if she informs people of her worldly pumpkin knowledge. On our way out, we checked out the guestbooks. Most people had written variations on a theme: “Beautiful!” “Very nice!” “Wonderful!” However, I saw one that made me do a double-take: “This is how Jehovah’s New Kingdom will be” …I sincerely hope that if this is the case, Jehovah works a little on his food offerings. This musing was expressed by MY guestbook comment: Then, I fulfilled my urge to ride everything by straddling their foal statue. I’m as surprised as you are that it didn’t crumble under my ass. We wasted some time in the gift shop, looking at the sort of assorted crap that none of us wanted to buy–none of us except John, who is drawn to gift shops as if by the world’s largest magnet. After rearranging some salt and pepper shakers in a semi-obscene manner and checking out some tiny statues of Mounties and a section of glass angels with what I suppose was intended to look like dark, curly hair but gave the effect of a head full of dog turds, I realized that it was getting quite late and we were almost going to miss our bus back to the city. We hustled back to the bus and arrived on time, only to have to wait for two ladies who had evidently found some excellent deals in the selfsame giftshop and were not about to be hurried away by the time constraints of anyone else. On the way back, the bus driver told us the road we were driving on had been given historical status and could not be fixed or replaced, so we had a rather bumpy ride–thanks, Canada. The bus driver again began to drone on and on about crap even I could not make entertaining, and thus I drifted off to sleep again. By the time I’d really settled into my nap, however, we were back in the city, and I woke up just in time to hear the bus driver ask us for tips. I’ve got a tip for you, buddy: Get a job that doesn’t involve interacting with the public.

We got some more coffee and then wandered to Chinatown, stopping along the way to do a little souvenir shopping. I got a cozy owl tuque, and enough Canadian candy to choke a horse (but not me, even though I did try to cram it all into my face at once). I’m sure the guy working at the 7-11 had a few choice thoughts about what comprises the bulk of my diet when I plunked thirty bucks worth of delicious candy in front of his register. The bus driver told us the lions are supposed to come to life when an honest politician passes through them, but as you can see, we haven’t found one yet. Oh, ha-ha, bus driver. Ha. Ha. Fan Tan Alley used to be used for gambling and opium and all sorts of interesting things. Now it’s merely famous for being a narrow thoroughfare, paralleling the career of Kate Moss. After some more wandering around the city, we found ourselves with just enough time to inhale a street sausage (not THAT kind of sausage, perverts) and some ketchup chips before heading back to the Clipper, where we waited in a waiting room for approximately forever, and then we had to wait standing in line outside in the cold air for another time period approximating forever while they loaded more sandwiches and Craisins no one was going to buy onto the ship. We were among the last on board and had difficulty finding a group of seats together that additionally wasn’t adjacent to a screaming child. We settled in, my dad got ripped off on some duty-free cologne which, as it turns out, he could have purchased more cheaply online, I stuffed my face hole with candy, and sometime between Victoria and home, we got to watch large swaths of water behind the boat glow and shimmer in the night. “Ain’t it just beautiful?” a stranger asked, in between handfuls of Craisins. I had no choice but to agree.