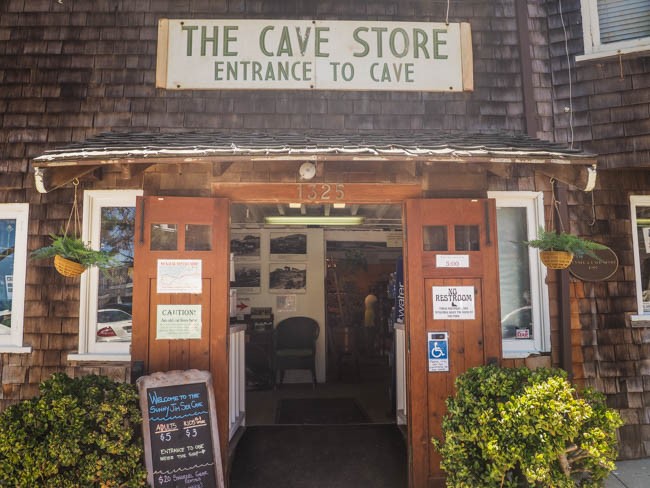 If you want to explore the many sea caves of San Diego, you’ll need to rent a kayak or other equipment to see them, with one exception. I elected to take this lazy route to Sunny Jim’s Sea Cave, with stairs from a storefront leading down into the cave itself. If you buy some jewelry from the store, the fee to enter the cave is waived. As an intrepid pursuer of bargains, I carefully perused the cases first,  because why pay five dollars to go into a cave when I could pay fifty dollars instead, go into that same cave, and come out with some jewelry I probably won’t wear, right? Right. At least I tried to spend more money, but ultimately didn’t find anything that appealed to me. I think the guy who worked behind the counter was also disappointed that I didn’t find anything, as he clearly needed the practice working on his sleight of hand–it wasn’t hard to notice that a cash payment got stuffed into his pocket rather than the register.

From the retail level, there are 145 steps down into the cave, and while I might have personally reconsidered calling this way into a sea cave “the lazy route” on the way back up, I should really be glad there are stairs at all–the original visitors to the cave had to ascend and descend via rope. My total lack of upper body strength combined with my characteristic overconfidence about my abilities would have allowed me to get down there but never be able to reascend, and it’s almost certain that for as long as my total decomposition lasted, the cave would get a new moniker: Bloated Stinky Corpse Cave. Sunny Jim’s Sea Cave got its name from L. Frank Baum (author best known for The Wizard of Oz), as he noted that the cave opening appears to be a silhouette of a person, specifically that of the Force Wheat cereal mascot, Sunny Jim. I probably would have gone with Weird Elf Head Cave myself, but you’ll note that they didn’t give me the naming rights. Something about my writing being utterly insignificant, any a-hole can get a copy of wordpress, blah blah blah, I wasn’t really paying attention.

The rocks in the cave are richly colored from their extended mineral bath–greens and reds and purples that need to be seen to be believed. Tiny crabs clung to their surface as larger waves lashed and foamed around them. It’d be even more beautiful if, as usual, some dicks didn’t take it upon themselves to carve their names all over everything. Special note to these guys: no one looks at your name and things “Wow, what a cool person, I wonder what they are up to right now, something totally cool I bet” they are thinking “WHAT A FUCKING ASSHOLE I HOPE THEY DROWNED.” Just so you know. Back on the surface, I was a few steps away from this cliff area. A sign clearly warned people off, but that didn’t seem to deter anyone, which makes sense. After all, it’s the edges that are unstable, right? So as long as you stay near the middle, you’ll be fine? From this vantage point, I could sea (and smell) that the sea lions were out in force, so I walked a bit down the road to the La Jolla cove to see if I could get a better peek.  In fact, not only could I see the sea lions better (some with pups!), but I also got to see a number of nesting brandt’s cormorants from above, which was pretty neat. Now, I’d heard the This American Life show about the Children’s Cove beach in La Jolla, and how a virtual war had been waged between the people who frequented that beach and animal rights activists, who wanted all of the people to stay away from the seals there and were using bullhorns to scream at people for “disturbing the animals”.  At the time, I have to say that I sided with the people who wanted to go to the beach–after all, I have fond memories of picnicking at that very beach with my grandparents while the seals flopped around nearby. We didn’t bother them and they didn’t bother us; they napped while I picked through the sand for sea glass.

After visiting the La Jolla cove, I have to change my stance on this one. I couldn’t believe the complete disregard for the animals here, or for their own safety. People were giving the sea lions and their pups no space, crowding around them, pretending to ride them, plopping their tiny toddlers right down next to them, and even when one would lunge at someone for getting too close, that person would back away momentarily and close right back in from another angle. It was sickening. You’d think one child being bitten on the face at that very cove would be enough to get people to give the animals some space, but no, it’s way more important to get a few likes on Instagram. Pass the bullhorn. Spotted on the Roadside: The Scripps Turd in La Jolla, CA