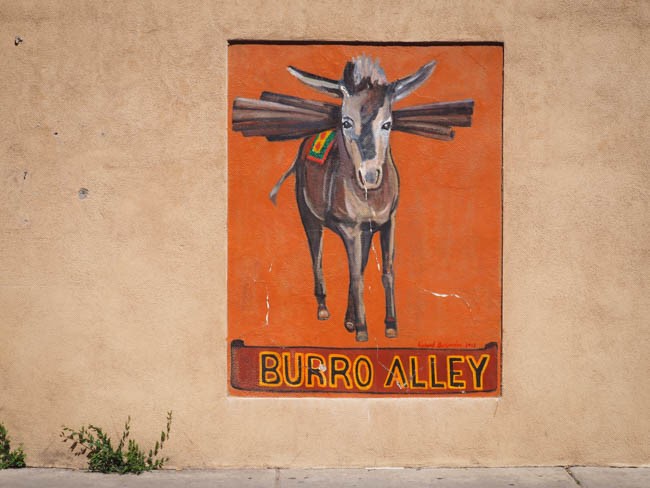 After the House of Eternal Return, we set what time we were aiming to leave the following morning and then split up to do what each of us needed to do to recharge our batteries for the trip back home, whether that was art galleries or shopping or eating or making sex eyes at bartenders. I had only a few hours before everything would start to close for the day, which meant I had to make some hard decisions, like crossing the O’Keeffe museum off my list. Not forever, though, I would go back to Santa Fe in a heartbeat.

I took a meandering path around the plaza, keeping an eye open for an ATM as I’d used the last of my cash that morning buying a croissant, and I don’t like being on a road trip without cash on hand. My stroll first took me through the historic burro alley where firewood used to be sold after being carted in on the backs of burros. Now it’s mostly empty, save for a couple of statues, a mural, and the patio for a Mexican restaurant. I spotted this mural on the back of a building on Sheridan Street. At the intersection of Sheridan and Marcy, there’s a piece of public art called “Santa Fe Current” that was installed in 2009, with 27 Rio Grande cutthroat trout rendered in granite and arranged in an arc to symbolize how Santa Fe’s community is moving forward together. And then there’s a statue of St Francis with a prairie dog, because why not? After I located an ATM, I made my way to The French Pastry Shop & Creperie to buy an iced coffee and a biscochito, the official New Mexico state cookie. It’s a variation on the traditional Mexican wedding cookie, made with lard and flavored with anise and cinnamon. I’d tried making these cookies at home a couple of years ago and wasn’t thrilled with the result, so I wanted to try a proper one, one made in a state that prides itself on biscochitos. It sat in my purse all day and was still super freaking delicious when I remembered to eat it just before I went to bed that night. I’m not normally one to forget about a cookie, it’s just that I was on the move, going in and out of shops, and while I had no problem being seen on the street drinking coffee, somehow I have a problem with the idea of someone watching me eat a cookie as I walk down the street.

I popped into Mama’s Minerals with my coffee and browsed a bit–it was a really nice rock shop, and the girls who were working there were truly personable. We chatted a bit and they gave me some excellent recommendations for places to eat, one of which I ended up going to for dinner. I ended up appreciating the employees here even more later, because most of the shops I went into were very aggressive about selling you things in a fashion I’m simply unused to. Like, I’m sorry, dude, but no matter how much you flatter me and try to get me to try this opal and diamond necklace on and treat myself, I’m not going to spend $2,600 on it. There’s an amount of flattery and guilt for timewasting that could get me to the hundred dollar range, but I don’t think there’s any amount of flattery and guilt that could get me to splash out more money on a necklace than I spent on my last three trips combined. Possibly four. Afterward, I made my way further up the street toward the Loretto Chapel and its “miraculous stairway”, supposedly built with a type of wood that doesn’t exist and in a way that should be impossible for it to remain standing or support weight. This was tentatively on my list but it was too damn hot outside to give up my death grip on my iced coffee for any staircase, Jesus-built or otherwise. Around the corner, I bumped into Emily, who was on the phone. We hung out for a few minutes, and then I told her I was on my way to find one of the Art*o*mat vending machines now that I had cash. I’d spotted one outside the gift shop at The House of Eternal Return but I didn’t have any cash at the time, and I knew there were at least two more within walking distance. Art*o*mats are retired cigarette machines that have been given new life as art dispensers, working with some 400 artists from over 17 different countries. For $5, you get to pull a knob and walk away with a cigarette box sized piece of original art, the contents of which are dependent on the artist you choose: it could be a painting, a drawing, a sculpture, photography, jewelry, glass, mixed media, or whatever they decide. It’s such a creative reuse of machines that would otherwise be discarded, and I had no idea that these machines actually exist all over the US. Before I go somewhere, I’m going to try and remember to check the map to see if there’s a machine nearby–what a cool way to collect little pieces of original art and support artists! For my $5, I got a neat acrylic painting of a sugar skull by street artist Lark, who according to their short bio, has never been caught and hates pickles. After I collected my piece of art, I bumped into Emily again and helped her shop for earrings. She says I’m good luck for finding pairs she likes, but I think I’m probably just really good at talking people into buying things after years in retail. Shopped out (for a little while, at least), we had dinner at The Shed,  winner of a James Beard award in 2003 and which also came highly recommended by the employees at Mama’s Minerals. We basically fell upon them like starving dogs and ordered one of every food and drink item on the menu and were not disappointed by any of them. Overheated as I was, I was immediately attracted to the cold red raspberry soup, which is made with pureed raspberries, rose wine, lime, and a hint of sour cream. It was so delicious, as was the green chile stew, the green chile chicken quesadilla, the steak smothered in red chile sauce, the blood orange margaritas, and the frozen mocha cake. I don’t know why entrees came with a side of garlic bread, but that was delicious, too. Stuffed to the damn gills, we did some more shopping and tried to find the most ostentatious piece of silver and turquoise jewelry we could find–I think I won when I found a turquoise bolo tie longer (and almost as wide as) my hand. We stopped in at Chocolate and Cashmere where I touched a lot of cashmere but didn’t buy any of it (hey, at least I know I can’t be trusted with the care of nice things), Emily bought a ring, and I bought a number of truffles that I didn’t end up eating until days after I got home. The poblano goat cheese truffle is why I laid down my money, but my ultimate favorite was the lavender caramel, and I was sad when it was gone.

Our next stop was Maverick’s, where the dude working there really laid on the sauce to try to get me to buy the aforementioned $2600 necklace, but the female employee was (again) super awesome. When she expressed shock that we’d driven all the way from Seattle for the sole purpose of The House of Eternal Return, I responded with “well, then you must not know how incredible it is,” and she replied that as an art major, not only had she been, but she’d purchased a year pass and been back three times already. She just didn’t know if it was worth days of driving to see, and I suppose if we weren’t having such a rich trip on all fronts, I could understand her point. If you drove straight, sleeping in the car, driving through the night in shifts for 36 hours, and only saw The House of Eternal Return, to leave the next morning and do the same thing on the way back, it would be a much more difficult trip with a significantly smaller return. When I expressed sorrow that we had so little time in Santa Fe and that I hadn’t even made it to the Jean Cocteau cinema to pick up a signed Song of Ice and Fire book, she snorted, whipped out a map, and showed me that it wasn’t all that far away if I was willing to do some walking. She then marked out a “must visit” gelato place, Ecco Gelato, on the other side of the map, funnily enough on the back side of the block where we’d just had dinner, but told us that if we wanted to go there, we’d have to make sure we got there before they closed at 9pm. I’m pretty sure Emily bought a pair of earrings just to thank her for her time.

We booked it the nine or so blocks to the Jean Cocteau where I bought my book, spotting an adorable little bunny on the way, and then hustled the eleven or so blocks back to Ecco Gelato, getting in just before they closed. It was totally worth it, even though I only had room in my stomach for their teeniest tiniest cup, which I split with roasted pineapple gelato and basil gelato–so refreshing in the heat and after a not-insignificant walk. Afterward, we met up with Rachel at the Secreto bar in our hotel and had a couple of drinks to toast a successful (so far) trip, talk about our days, and have one last hurrah before we called it a night to get ready to hit the road again. We all knew it was going to be a harder push–we’d gotten there in four days, but were going to attempt to get home in three. Rachel and I noted that the Power of Positive Mechanics logo on the business card she swiped (“Don’t look at me that way, they had thousands of them!“) would make an ideal friendship tattoo to commemorate the trip, but Emily, not being a tattoo person, could not be convinced. Frankly, I don’t understand why she wouldn’t want an art cult logo on her body forever. What a weirdo.

And then I ate the cookie. SEE? You forgot about it, too.