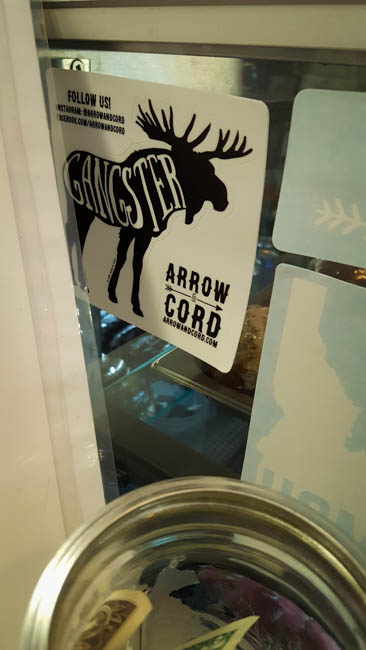 Anxious to hit the road again, we had just enough time to grab some hotel breakfast and coffee next door, where I learned that while Virginia may be for lovers, Boise is for gangsters. I should have known. Forget about the potatoes. Boise, Idaho has a longstanding reputation for being home to some of the hardest people on Earth. For instance, a quick visit to the idahogangs.com website shows that the area is routinely terrorized by members of the so-called “Insane Clown Posse,” a group which is well known for guzzling large (dare I say insane?) amounts of Faygo brand soda, smearing themselves with paint, and talking about how they’d kill people with hatchets if they weren’t so stoned they can’t get off the couch. The moose gang isn’t mentioned, but I have to assume they’re relatively new if they have to make up swag stickers to get people interested and build up their rep as true badasses and terrors in the night. Owing to all that coffee consumption, we stopped at nearly every rest stop along the way, and I marveled at how much the scenery had changed over the course of our trip so far–from green mountains with dazzling blue lakes to desert hills to scrubby plains with silver bushes dotting the landscape like pills on your favorite sweater. One rest stop we visited was full of nesting swallows who scolded us as we tried to get a peep of their young. When we were able to tear ourselves away from the birds and convenient restrooms, we hit the road and continued to Twin Falls, home of “Niagara Falls of the West”–though not as wide and also taller, so not really like Niagara Falls at all. I’ve never understood that naming trend. Is it for people who can’t go and see the original? Is it for people who want to take a trip but want the familiar comforts of something they’ve already seen? Is it for the namers, who have an inferiority complex about the actual goodness of the thing they’re naming? My house is at the Everglades of Washington state, only with mostly ducks and frogs and way fewer (no) alligators and 0.00001% of the size! Come meet my dog, he’s the Lassie of jack russell terriers, except if you’re on the floor weeping in pain instead of going for help he tries to cram his tongue down your throat! I’m the Jennifer Lawrence of untalented regular people!

On our way there, we passed the spot where Evel Knievel attempted his Snake River Canyon jump in 1974, which had me pondering: in a post Evel Knievel world, who is our flamboyant daredevil? Must our canyons remain unjumped? Our gorges’ airspaces undisturbed? Our predators with slightly fewer chances to grab and eat a passing man off of a motorcycle? Our leather jumpsuit and cape artisans’ workload remain empty? The answer is no: Eddie Braun is making another attempt at the Snake River Canyon this September.

A mere three miles down the road is Twin Falls, aka Shoshone Falls, aka Niagara West, aka America’s Icelandic Toilet (no doubt as the popularity of this blog surges, that last one will catch on).   Again, it’s 29 feet taller than Niagara and significantly less wide. It also can dry up over the summer, but we hit it around peak season and were suitably impressed. As is usual with the Harpies, we quickly made friends with other people in the viewing area, one of which was on another ladies’ trip to Kentucky–theirs probably involved fewer filthy jokes, but that’s just a wild guess. I tried to go a bit further down the path to see if I could find a better, quieter viewpoint, but it got extremely narrow and overgrown almost immediately with just a bare chain link fence preventing me from falling off the cliff should a snake or some other critter appear while I’m tramping down in an area with no other people, so I quickly reconsidered my plan and turned back, not wanting this excursion to turn into one of those “Mellzah stories” wherein I do something foolish and am surprised by consequences. (Somewhere out there a reader is whispering “She can learn!”) After lunch and some more coffee (#jitteringdowntheroad #secretbackseatnaptime) we crossed over into Utah, and the landscape turned into some shit from the Sound of Music, which I helpfully sang from the backseat to make sure everyone else was feeling the vibe. For some reason, the music in the front kept getting cranked up, but luckily, I know a thing or two about singing from the diaphragm. Our destination was Promontory Summit, which is where the USA’s first transcontinental railroad met, with the hammering of a golden spike. On the way there, though, there were signs indicating there was a “rocket display” of sorts coming up. While I appreciate that they had a sign to let me know about its existence, it was somewhat superfluous as there was absolutely no way we could have accidentally driven past this rocket display without seeing it. And even though there was a sign letting us know the rocket display was there, and there were informational signs in front of each piece, it still felt like we were walking around somewhere we probably shouldn’t be. Emily wouldn’t let me climb aboard one to do my best impression of Major Kong, so you have her to blame for that. And also all of those “don’t climb on the rockets” signs. Killjoys. One thing is for certain: they definitely didn’t dumb their signs down for your average rocket-viewer. Some sample text: “The integral booster chamber then becomes the ramburner for the ducted rocket, and the end-burning, fuel-rich grain completes combustion in the ramburner.” Hmmm. You don’t say.

As employees started to leave the building, we stopped snapping photos of me posing with a rocket as if it were a giant dong which is a wholly unique thing that I’m sure no one has ever done before but I still wasn’t keen on the idea of having rocket scientists see me do it for some reason. Maybe because then they’d be less inclined to believe that I understood their signage and also because we were now in Modest Utah and I wasn’t certain if that was the sort of thing you could be arrested for, like wearing leggings that show your butt and drinking boozy coffee.

We started running low on gas as we approached Promontory Summit, which is always pretty exciting–would we make it to a gas station in time or would we be making use of the car’s exciting roadside assistance button and get to explain to a dispatcher that we were too busy making dick jokes to notice the gas gauge? But since there were no stations between us and the summit, we pushed on to the summit first. Would you believe that I dinked up my camera settings and all the photos I took inside of the building are completely black, including the golden spike? Believe it.  They don’t even have the real golden spike there, it’s just a replica–the real one is at Stanford University. The golden spike wasn’t the last spike driven, regardless–it was wholly for ceremony and immediately pulled up, along with the final tie, to thwart treasure hunters and souvenir seekers, who would have torn it apart within seconds of being laid. It was replaced with a normal tie and a regular iron spike. I don’t know when that tie was replaced with the varnished tie they have in place now. The tag on it says 1869 but frankly, I think that’s a load of hot steamy railroad smoke. Even so, it was cool to be standing at the spot that changed the way America traveled while in the middle of an excursion across a sizeable swath of it. No, car, you’re doing it wrong. Will our intrepid explorers make it to a gas station? Or am I blogging this from a Utahan jail after being mistaken for a prostitute? FIND OUT NEXT TIME on Sunburn and Bugs: No Really None Of Us Are Hos!