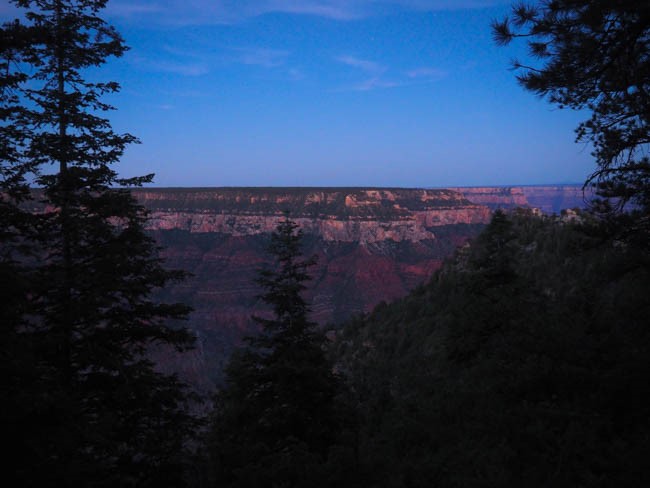 I’m not going to name names, but a very stupid and naive person once said “There’s no drive as long or as tense as the one to a gas station of indeterminate distance when your gas light has just ticked on.” That is patently untrue, and I know this because I have made two drives since that were much longer and much more tense: the drives to and from the Grand Canyon. But I’m getting ahead of myself.

No trip to the southwest is complete without a gander at the biggest goddamn hole in the world. The Grand Canyon is actually so large that the north and south rims of it are drastically different. Most photos and videos you’ve seen of the Grand Canyon are from the south rim: rocky and dotted with desert scrub, the elevation is lower than the north rim, which makes it easier to see the other side and appreciate its, uh, grandness. The south rim is also the side that offers mule rides and helicopter tours, and has that skywalk that will test one’s comfort levels with heights. Owing to our route, visiting the south rim would have involved more backtracking and made for an overall longer day, so we went to the more hipster north rim, which is heavily forested and cooler, both because of the aforementioned forest and elevation, and because you then get to say that you visited a part of a national park that’s like, totally more obscure.

Heavily forested is where the problems came in. We were actually making excellent time from Antelope Canyon, and were poised to arrive at the Grand Canyon just before sunset which would give us a view of this natural wonder in the most gorgeous light possible. We turned off onto the road that leads to the north rim, and I was just congratulating myself for timing the day juuuust right when I saw the deer warning sign. With a deer under it. Every other time I’ve driven past a deer warning sign, I have not seen a single deer. Not a single one. Between that first deer and the parking lot for the north rim, a distance of about thirty miles,  I saw literally hundreds of deer. On summer trips to Eagle River, Wisconsin, my family would go on car rides in the evening to go look for deer. I could add all of the deer sightings of all of those summer trips together and still come up short of the sheer number of deer I saw on that thirty mile stretch. Deer ambling across the road, deer cropping alongside, deer churning in heaving waves across a stretch of meadow, a frothing sea of fucking deer. I drove, white knuckled, the entire stretch to the north rim. Less so drove than crept, foot hovering over the brakes, looking in despair as the sun began to slip down over the horizon, the sky bursting in gorgeous color that I could not appreciate because I was desperate to not destroy Emily’s new car via gutwrenching deer incident. And then came the warning signs for cows. And bison. And now that I knew that they were totally not kidding about the deer, I took these warnings very seriously and wailed in despair at the thought of more thousand pound plus animals that could come charging blindly at the car. What warning signs would be next? Warning: Elephants? Warning: A Damn Landwhale?

When we finally made it to the parking lot, Emily got behind the steering wheel and said she’d find parking while Rachel and I dashed out to try and get a peek before darkness totally overtook the canyon in a way that would make dashing irresponsible, lest one of the less-coordinated members of our organization (me, I’m talking about me) trips over a rock and hurtles over an unseen edge. The admittedly small taste I got of the Grand Canyon was tantalizing. I absolutely want to go back and spend some more time looking at this giant hole in the ground, do some hiking around, enjoy it while I don’t have a stress knot in my back from running through brain scenarios where I trash an expensive vehicle, kill an animal and possibly one of my friends, and leave us stranded on the side of the road thousands of miles from home. You know, those kinds of calming mantras that tend to always pop up whenever they can make a bad situation more stressful because my brain is helpful like that. I’m fairly certain that if I ever got into a really bad situation, like one of those “trapped under a boulder and I’d have to cut off my own arm to survive” type things, my brain would chime in and convince the rest of my organs to just go ahead and die on the spot because it’d be easier. Sort of a biological “nope, everything is too fucked up” force shut down.

We somehow managed to find Emily in the now pitch darkness and set off for our day’s final destination of Kanab, Utah. I got behind the wheel again as it was still my turn, and I figured the drive out had to be less harrowing than the drive in–the deer would be less active now, right?

Having borne witness to the sheer masses of deer within the park on the way in, we were on high deer alert on the way out, and for some reason, decided to count them. You know, for funsies. We spotted deer number one almost immediately. My hands clenched into fear fists around the steering wheel. In the dark, the most reliable way to spot a deer is to look for the glint of reflected headlights in their stupid, stupid eyes.  And spot them we did. Deer two, deer three, deer four, deer five…deer six charged directly at the car. Road trip radio seemed to be making light of the situation with a selection of music that seemed almost diabolical.

Deer twenty, deer twenty one, deer twenty two–HOLY SHIT WAS THAT AN OWL THAT JUST SWOOPED DOWN AT OUR WINDSHIELD? Why does nature hate us?!

Deer forty three, deer forty four, deer forty five…we began to do that hysterical kind of screechy laughter that happens when you’re in a situation that is entirely out of your control and is simultaneously scary and ridiculous. Cars blazed up behind us, swerved around us, and disappeared into the night. Have they never seen a deer explode over the hood of a car before? Were we the only ones being threatened by this hoofed menace?

And just as we pulled off of the park road and I began to breathe a sigh of relief that the worst was over, I slammed on the brakes and screamed as a cow appeared from out of the darkness inches from the bumper, placidly chewing its cud. The worst was not, in fact, over. Ahead of us we faced another deadline: get to Kanab before their only restaurant open this late, the paragon of fine cuisine otherwise known as a Wendy’s, closed for the night. The Race for Fries had begun. Rabbits dashed out in front of the car, another owl swooped at our headlights, and I did my best to keep from smooshing anything in my quest to get to Kanab on time for a hot meal.

We got to Kanab just before 10pm. Wendy, that bitch, had decided to close early, so we made a meal out of whatever we could scavenge that sounded appealing from the lonely Kanab 7-11. And I mean, bless them for being open, but if I never have to eat one of their sad dry refrigerated sandwiches again, I would be just fine with that. I didn’t end up eating much, anyway–my throat hurt from all of the gasping and laugh-shrieking and just plain screaming, and I was more than ready to call it a night and await the coming of the light, when suicidal animals would be a lot more visible.