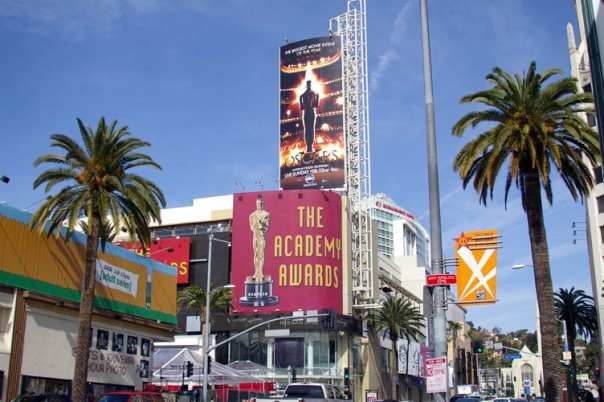 On Friday, my dad and I took a trip up to Hollywood to bum around and see the sights. I vaguely remember going once before when I was about 13 and not having a particularly good time, but that’s because we took one of those tours of the stars’ homes and it went a little something like: “This is Barbra Streisand’s hedge. She actually owns this hedge. If you could see through this impenetrable hedge, you would actually see Barbra Streisand’s home, but, as you can see, the hedge is completely blockading the home. We will sit here for a few more minutes until you’re completely satisfied with the pictures you’re taking of the hedge. Next, we will see a row of trees formerly owned by Clint Eastwood, and an alltogether different hedge that might belong to Tom Cruise’s poolboy. ” Booooo-ring. They were preparing for the Sunday’s Academy Awards, and since rain was anticipated, the walkway for the stars was covered by plastic tarps. The first place I demanded to go to was the Frederick’s of Hollywood Lingerie Museum, because…well…sometimes I don’t have a very good reason to do the things I do. Unfortunately, Roadside America led me astray as the Frederick’s of Hollywood had closed the Lingerie Museum portion of their store some three years ago because people would come in to ogle where celebrities had nestled their boobs and not buy anything. I, personally, would’ve bought something from the Frederick’s of Hollywood IN Hollywood, but shopping for trashy lingerie isn’t high on my list of priorities when my dad is standing right next to me. Gross. They did have about five celebrity designed bras/corsets on the back wall, which were all pretty nifty, but a burly dude in a suit with a white earpiece who was obviously playing at being an FBI agent yelled at me when I made a move to take a picture. This is the entryway to the theater where they were holding the Academy Awards. The red carpet was already laid, but it was entirely covered with plastic to keep it clean, or keep the plebes off. Even through a layer of plastic, I was pretty geeked out to be walking on the red carpet. After we’d seen all of the Oscar replicas we’d ever care to see, we wandered down the road to the mandatory Hollywood pit stop, Grauman’s Chinese Theater.   Here, we’ve got Darth Vader dancing with Wonder Woman, while Batman does his thing in the background. I find it thrilling to my childish soul that some people are making a living prancing around in costumes all day, taking pictures with tourists. I like to imagine someone telling William Shatner that he’s signing it wrong, and him rebutting them not to correct him, as it sickens him. My dad has teeny tiny hands compared to Steven Seagal! Many ladies would compare their footprints to the legendary Marilyn Monroe. I am not many ladies. You know what they say about guys with big feet, yes? They have to go to specialty shoe stores. After we tired of being propositioned by Darth Vader, we decided to stop into Ripley’s Believe It Or Not Odditorium, which is the sort of thing that’s right up my alley. Had I known that the Hollywood Museum next door had sets from Jaws, I would’ve elected to go there instead, but I still stand by my decision. Robert Ripley looked like a goddamned goofball. In every picture, he’s got that weird pedo smile, and he’s just one of those guys whom you can picture walking around, going “DURP DE DURP, I’m an adventurer, DURP DURP DURP.” He durp de durped around for thirty-five years, exploring the world, seeing places few people of his time had ever heard of, from the tombs of the Ming Emperors in China, to a town called Hell in Norway. He actually started on this course after his dreams of pitching pro baseball were destroyed when he shattered his arm during a training game. He was quite famous for his time, voted the most popular man in America, above movie stars, sports figures, and even President Roosevelt. He had fans among the rich, the poor, and people of all ages. His most famous ‘fan’, however, was a man who made it his life’s mission to try and prove Ripley was a liar–for twenty-six years, he wrote letters to people featured in the Believe It or Not! cartoon attempting to find factual errors. ‘Believe it or not’, he wrote over 17,000 letters, but never received a single reply that contradicted one of Ripley’s statements. Upon his death, his widow donated his vast collection of correspondence to Ripley, and some of it is now on display at the various Odditoriums. Ripley dressed eccentrically, collected torture weapons from Germany, was afraid to use the telephone due to a fear of being electrocuted, and had many cars but couldn’t drive. All in all, I think we would’ve gotten along swimmingly. Plus, it couldn’t hurt to be around someone who manages to look even goofier in photographs than I do! Do you see the skull or the kids playing chess? This is a mask made from faces flayed from slaves. That may or may not be standard practice when I rise to the dictatorship. This is an old chastity belt–my dad and I were laughing so hard about it that I couldn’t manage to take a non-blurry picture. What were we laughing about? Well, so, sure. This metal contraption will keep invading penii from breaching the hull, but after a woman has worn one of these for a number of years, would you even want to go down there? I imagine it’d smell. BAD. Like, leg just out of a cast bad. Could you crap through a hole about the size of a quarter? What are you, a Dairy Queen Soft Serve Swirl machine? Here, we captured our shadows on the wall. Peta is going to splash this hoity toity fish with red paint. FUR IS MURDER, YOU SEA KITTEN! After our adventures, we had lunch at Mel’s Diner, talked smack about other family members, and stored away some energy for the second half of our day, which deserves an entirely separate post. Expect it tomorrow-ish!

12 Comments → “Steven Spielburg is unavailable.” “Then get me his non-union, Mexican equivalent!”