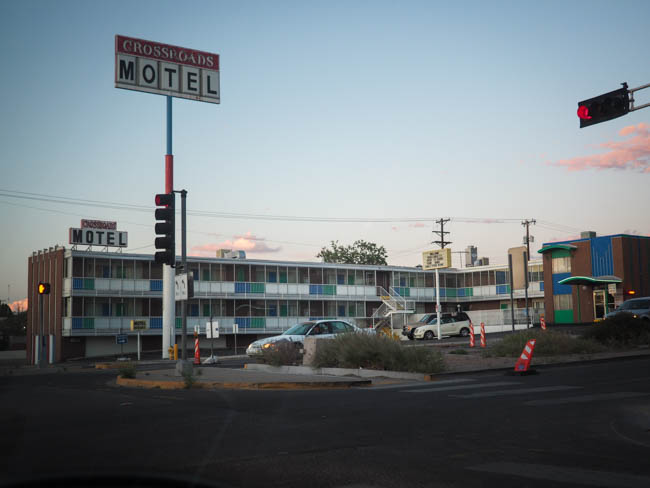 For as long as the show remains in pop culture memory*,  the city of Albuquerque will be tied to Breaking Bad. I’m not such a die-hard fan that I wanted to turn my trip into a Breaking Badcation, but if you’re familiar with the show at all, you’ll spot little nods and filming locations all over town. Like, for instance, the Crossroads Motel (or “crystal palace”), which was smack on the corner where we turned to go to our hotel (“Is that…? No, wow, it looked so much worse on the show.”). There was also a little nod to Heisenberg at Rebel Donut, with their “Blue Sky” donut, sprinkled with blue sugar crystals. There’s The Dog House, the hot dog joint where Jesse slings meth and buys a gun, and Garduños, where a waiter awkwardly presses tableside guacamole on the family, not reading the mood of the room. Jason and I got lunch/dinner at Garduños (their portions are, to put it mildly, gargantuan), including the aforementioned tableside guacamole, which Walt is frankly a fool for passing on**. We also found Walter White’s tombstone, which was initially placed in the Sunset Memorial Park cemetery, but was later removed to a strip mall*** after some families complained. I didn’t even consider swinging by the home portrayed as Walter White’s on the show because the real homeowner has had so many issues with people lurking outside her home and throwing pizzas on her roof and frankly, I don’t want to contribute to her stress  or be associated with a bunch of salty asshole fans when I’d seen plenty of Breaking Bad stuff around town anyway. I guess, for her, the sooner the memory of the show fades, the better.

*Not terribly long, if Forks is any indication.

**Like, in a show that’s essentially about a series of bad decisions, this might’ve been his worst one. They make it right at the table, man.

***There was some construction up at the strip mall and I didn’t know if we’d be able to pull into the parking lot, so I parked at nearby Dan’s Boots & Saddles. We wandered into the store afterward and ended up outfitting Jason with a bunch of new work shirts and a pretty bitchin’ cowboy hat. I want to say we were helped by the owner, and he was helpful and knowledgeable and friendly in a way that one doesn’t often see anymore which is why I’m plugging his store in this completely unrelated blog post. So if you’re in the area and in the market for some boots or a hat, definitely stop in!

One Day in Santa Fe

3 Comments → “Stay out of my territory”: Breaking Bad in Albuquerque