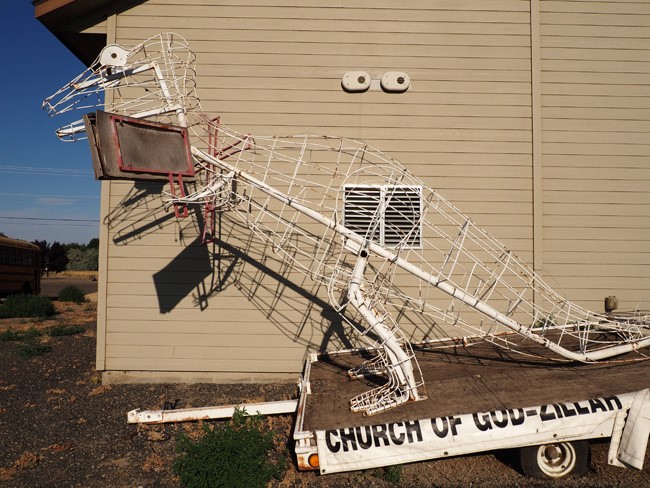 In the town of Zilla, WA, is a glorious pun come to life…or half-life anyway. It all started as a joke, with the reverend of the then Christian Worship Center being called the leader of the Church of God-Zillah, and being a B-movie fan, he decided to embrace it and build a fire and brimstone-breathing lure to get people to come to church. Not being one to be too prideful of his creation, however, it’s tucked behind the church instead of out front–if you didn’t go looking for it, you would have no idea it’s there. It’s my understanding that they originally intended to skin it and outfit it with motion detectors so its eyes would light up as cars passed by, but given that it was constructed almost fifteen years ago and no progress has been made on that front, the saddest little ‘zilla in Zillah languishes naked before god and everyone. All I know is if a dino with glowing red eyes showed up on my doorstep and asked if I had moment to talk about our lord and savior, I wouldn’t shut the door in his face.

Spotted on the Roadside: The Teapot Dome in Zillah, WA