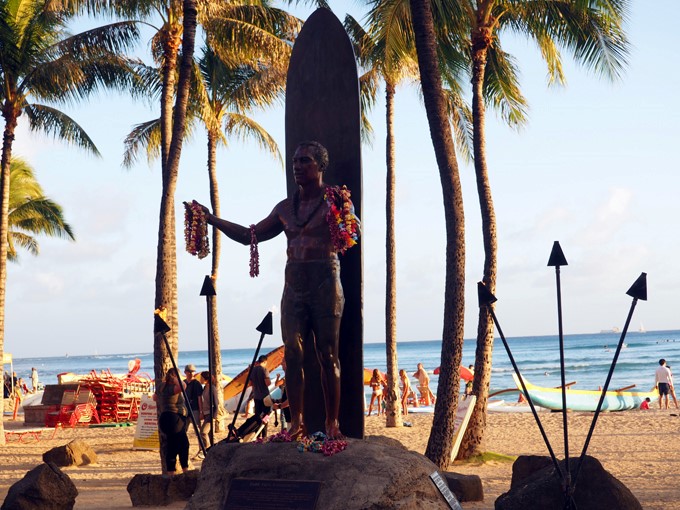 Residing beside one another in Waikiki are two sites of note–the shaman stones (or “Stones of Life), and a statue of Duke Kahanamoku. As long as throngs of tourists aren’t blocking your view, you can literally turn from one and see the other!

The plaque on the Stones of Life reads “Legend says that these stones are the living legacy of four powerful Tahitian healers who once resided near this site at a place called Ulukou. From the court of the Tahitian chief, the names of the four were Kapaenahu, Kapuni, Kinohi and Kahaloa. They came from Moa’ulanuiakea on the island of Raiaiea long before the reign of Kakuhihewa, beloved O’ahu chief during the 1500’s. The fame of the healers spread as they traveled throughout the islands administering their miraculous cures. When it was time to return to Raiaiea, they asked that two stones be placed at their Ulukou residence and two at their favorite bathing place in the sea. Four huge stones were quarried from Kaimuki, and on the night of ‘Kane’ thousands transported the stones to Ulukou. Incantations, fasting and prayers lasted a full cycle of the moon. The healers then gave their names and mana (spiritual power) to the stones before departing to their homeland.”

In 1997, the stones were moved together in Waikiki, placed on an altar, and fenced in to protect them. The heaviest stone weighs almost 7.5 tons–no wonder it took thousands of people to transport them!

The statue of Duke Kahanamoku is by far the more popular tourist attraction–Duke was the father of international surfing, having introduced the sport to the eastern seaboard. He was also a multi-Olympic goldwinner, movie star, and even served as sheriff for a time, and was honored with this statue in 1990*.  Duke’s torches are lit with a special ceremony every Tuesday, Thursday, Saturday, and Sunday at 6:30pm, followed by a hula performance. If you’re in need of a quick Hawaiian vacation, you can crank up the heat in your home, make a drink, and watch via webcam.

*Duke was also honored with a beachfront restaurant and bar that everyone says you should go to, but you really, really shouldn’t, unless super drunk cover bands singing “hotel california” are your thing.  Their lava flow drink is the bomb, though.

Spotted on the Roadside: The 16th President Multi-Tasking

Spotted on the Roadside: The Church of God-Zillah

Spotted on the Roadside: A World Champion Cow in Carnation, WA