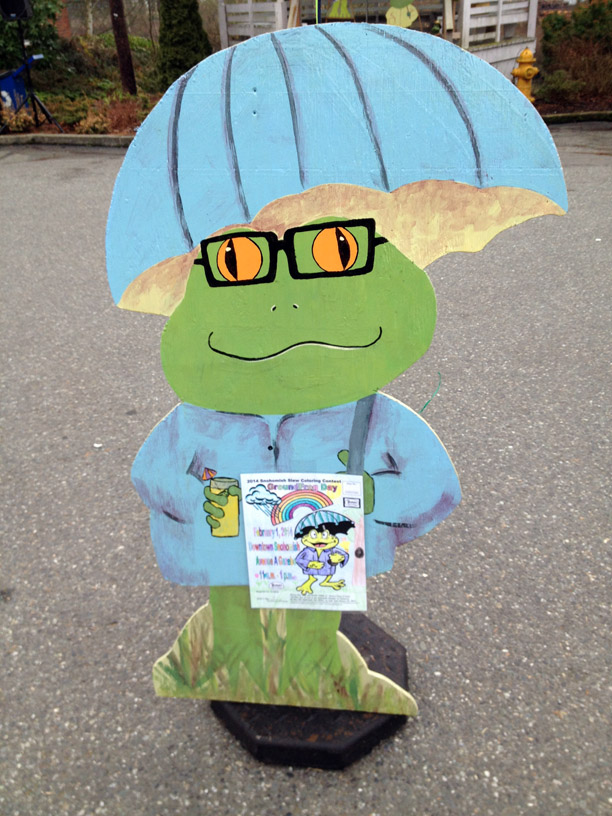 This weekend, we attended GroundFrog day, the Snohomish mini festival of frogs.  On GroundFrog Day, noted Frognosticator Snohomish Slew informs the general public, in Jason’s words, “If he sees his shadow, uh, there’s six more weeks of winter. If he doesn’t…something about spring.” That’s not exactly the case; unlike other weather-predicting animals, Snohomish Slew’s aren’t shadow-based. Instead, if he croaks, spring is coming, and if he sits in silence, we’re in for six more weeks of froggy, soggy Pacific Northwest winter. We arrived early enough so we could stake out a spot directly in front of the gazebo so we wouldn’t miss a second of what was certain to be intense weather-predicting action. Jason had been looking forward to GroundFrog day all week, excitedly counting down the days, and telling all of his coworkers our weekend plans. I was quite excited myself. I only found out about the possibility of the event by chance in January while idly scanning Roadside America; I ended up calling the Just Frogs center to find out if there was actually an event this year. Slew’s handler (who speaks fluent Frogese), told me that not only was there an event this year, but that Slew was “fat, happy, and raring to go”. Topping the scales at over four pounds, Slew was ready to go, but since his prediction takes less than a minute, there needed to be a bit more hoopla in order to get people to gather. Hoopla like hula-hoops, and a Frog Princess, Amphibiana. Amphibiana arrives in her green mustang. If looks could kill…

Now, I don’t know about the Frog Princess selection process, but I can tell you for a fact that Amphibiana is not the people’s princess. If she wasn’t rolling her eyes and scowling, she was making it clear that it pained her deeply to be present, and that she was far too cool to be associated with a weather-predicting frog. I’m certain it hurt Slew’s feelings every time she wiped off his kisses with a grimace. After Princess Sourpuss arrived, there were a number of songs and dances: about alligators, about Slew, about funny bones, and one that I’m pretty sure was just gibberish. In general, I don’t mind song and dance numbers, but I’m not into group sing-alongs of songs I don’t know, especially songs that make the singers sound like jackasses, and the songs that are designed for group sing-alongs are ALWAYS written to make the singers sound like jackasses. Don’t believe me? I dare you to tunelessly sing “He’s a hip-hoppin’ rip-roppin’ ribbedy-roo” the next time you’re in a public place and see what kind  of looks you get. The other thing that bothered me is that the older gentleman singer seemed awfully focused on “the young girls” in the audience, continually asking them to come up and dance, to do a little dance for him, asking what they thought (nobody else, just “the young girls”), asking them to hold his hands “because they’re cold”…it was creepy. Here’s the legend of Seattle Slew, pulled from the GroundFrog Day website:

“Long before settlers arrived and named a snow-capped volcano “Mount Rain Here!”, and long before Lewis and Clark discovered half-caf lattes, came the legend of Snohomish Slew.  Seeking to find an enchanted kingdom, the frog (fresh from tadpole graduation, as legend tells us) hopped his way across the country to the Pacific Northwest.  The frog’s quest was to find a luscious, green, year-round climate with plenty of food and fauna.  Once there, winter hibernation would be a thing of the past.  Preferably, this frog wanted to escape the doldrums of amphibian slumber, the melancholy caused by relentless French epicureans, and absorb the sleepless in Seattle lifestyle.   Following the paths blazed by migrating sheepherders over the Continental Divide, the frog queried many of Mother Nature’s creatures along this great journey, asking for directions along the quest.   Sasquatch told the frog to seek the land between Mount Rain Here and Mount Pilchuck, where a great waterfall spills into a river with great variety of life.   The wild pigs that ran naked in the forest told the frog to seek the valley where the river runs pink with salmon.   The majestic Bald Eagle told the frog to look for a place near a great estuary where other eagles, hawks and songbirds sing all the livelong day.  There, close to a great bay, will be the soggy and foggy land that lends itself to frog frolicking and frog play.   A stately white tailed buck told the frog to follow the river to a place where muskrats and river otters play Marco Polo with steelhead.  Additionally, the buck warned the frog to stay away from migration trails and to never look into oncoming lights at night.   Continuing along the way, the frog encountered other creatures that provided direction and advice.   A rookery of Blue Heron passed on eating the frog in exchange for the frog’s promise to create a large pond or pool of scum and many other happy frogs.  They told the frog to seek the place where mushrooms and toad stools grow taller than yard gnomes.   The raccoons instructed the frog to find the valley where slugs roam freely in herds like great Bison on the plains.   The possum told the frog to seek a place where two rivers meet with a warm, dark lake, full of stocked fish.  They too warned the frog about crossing migration trails at night.   The raven told the frog to look for a place in the valley, rich in compost and pumpkins,  with that unique and distinct smell of agriculture.   The mystical Weedle on the Needle instructed the frog to seek a place where beavers carved a great archway into a Cedar tree and to look for the critters of the region who caper on through it.   The grizzly bear encouraged the frog to seek land close to his brethren Silvertips.   Wild Rabbit, in the nearby briar patch, told the frog to hop through the forest, gather up the field mice and bop them on the head.   Finally, the lonely, half-humped moose was able to lead the frog to the site that best matched all of the previous descriptions.  The moose took the frog to oracle with the wise, old, spotted owl.   It was there the owl, that great keeper of the forest, ended the frog’s quest into amphibian nirvana.  The owl told the frog to make home on the shores of the river known as “Snow-home-ish” which, translated from the native dialect, meant “Great waters for micro-brewing”.   After the long and life expanding journey, the frog hopped to the shore of this great river and  passed through the great cedar archway.  The locals met the frog with shouts of “Kla Ha Ya” which meant “Welcome to the antique, wedding capital and upcoming brewing center of the Pacific Northwest”.  This date was set into providence, and on February 2 (or Saturday closest to) of each year the locals celebrate the frog’s great journey with Ground Frog Day,  in which the natives reach out to others seeking nirvana and greet them with the Kla Ha Ya traditional shout.   Local myth, as “toad” down from generation to generation, about the magic of Snohomish Slew dictates that, on this date, he who rubs the tummy of frogs shall be rewarded with 6 weeks of luck and joins in the celebration of GroundFrog Day to hear Slew predict 6 more weeks of foggy, soggy weather or an early arrival of Spring with drizzly rainbow filled skies.    Just the way any frog would expect in our Pacific Northwest Nirvana.”

Why didn’t they tell the legend of Slew instead of singing the wibble-wobble-jibble-jobble song? It would have been far more interesting and relevant. Jason agrees: “I wanted to know more about Slew, not his rip-rip-ribbedy-doo.” Plus, where was the tummy rubbing and the traditional shouting? I would have much rather participated in a shouting activity than a singing activity! While we waited for Slew to arrive in his firetruck convoy (I guess the city of Snohomish just crosses its collective fingers and hopes for no fires?), and tried to ignore the creepy overtures of Mr. Ribbedy Doo, this enormous dog picked up the slack  by wandering around and leaning his bulk against anyone and everyone, eventually knocking down a kid. Once the kid was down, the dog then tried to sit on him. In this instance, I think that the dog could have saved his ramming action for the old man who decided it would be cool to cut directly in front me to get closer to the gazebo, which makes no sense as he was at least a foot taller than me and would have had no issues seeing the stage, whereas my view changed to a bunch of liver spots. Get him, bear dog! Eventually Slew arrived to great fanfare, and was held up to the microphone to give us his frognostication for the coming weeks. The whole crowd held its breath in anticipation and waited. Princess Sourpuss pulled a face. And waited. And waited. Stony silence from Slew, which means six more miserable weeks.  I’m not trying to blame the messenger,  I would have just appreciated some good news. Instead, I blame Princess Sourpuss wiping off his kisses: it’s hard to be cheerful and talkative when you’re living a lie in the public eye. You can do better, Snohomish Slew. You can do better.

A hike to Blue Lake