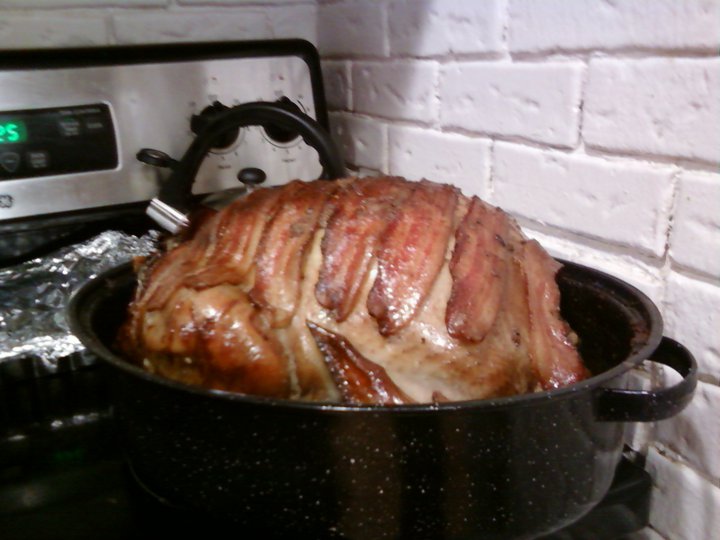 Thankfully (oh ho ho), the weather cooperated at the end of last week, so I was able to attend all the Thanksgiving festivities I’d planned instead of weeping into turkey and mashed potatoes in a diner.

On Thursday, I celebrated with Aisling’s family–I’ve been over there for so many holiday gatherings now that it’s practically a tradition, and everyone there is so wonderful–they’ve never made me feel like anything less than a full-fledged member of the family. We ate, and yelled at football players, and ate some more, and then ate some more, then engaged in a rousing round of “The Name Game”, then ate some MORE, and settled in to watch “Elf”, which is much cuter when you actually watch it instead of passing out in a velvet santa suit. As we were leaving, Aisling’s grandma gave me a hug and said it was wonderful that they get to see me at least once a year, but that I ought not to make it so long between visits. AWWWW. They’ll be sorry once I start coming over for dinner every Sunday.

On Friday, my stomach and I regrouped for Thanksgiving 2.0, aka Friends Thanksgiving. This involves a bunch of attractive people getting together, eating, and then playing filthy word games into the wee hours. Chantal had accosted me at Tonya’s birthday party and demanded to know why I wasn’t wearing red lipstick, which is why I am wearing the fussiest color of them all on a day full of eating and drinking. I get compliments on this color every time I wear it, and the only reason I’m telling you this is because today is World AIDS day, and the shade I wear is MAC Viva Glam I, a product line from which every cent of the purchase price is donated to the MAC AIDS Fund, to support men, women, and children living with HIV and AIDS. If you like it, it’s a way to treat yourself to something nice and make a donation at the same time to an important cause–or if red isn’t your thing, they also have more neutral shades.

After the kids blacked outwent home, we played “The Game of Things”, which always ends up being a contest to see who is genuinely the filthiest. This group of people may, in fact, be the filthiest people alive. This became readily apparent when our ideas were revealed for “Things you shouldn’t call a children’s book.” …actually, I’m curious how deep this disgusting rabbit hole goes–what do YOU think we shouldn’t call a children’s book?

32 Comments → Six bucks and my right nut says we’re not landing in Chicago.