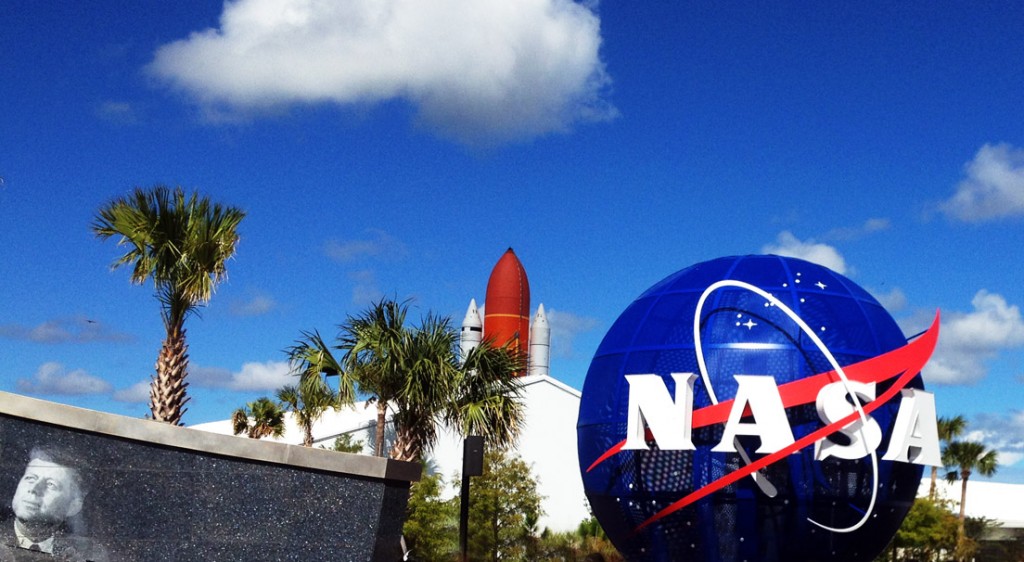 We weren’t certain if we’d be able to tour the Kennedy Space Center as our trip fell smack in the middle of the government shutdown. As it turned out, the visitor complex remained open, but other things, like the bus tours and vehicle assembly building tours were suspended, nor were we allowed to enter the Kennedy Space Center proper–so thanks for ruining our honeymoon, Republicans. Way to go, hope you’re proud,  and congratulations, you’ve made The List. Shortly after we arrived, there was a presentation by astronaut Mark Lee, who told the audience about some of his space missions (including his untethered spacewalk), as well as answering their questions and posing for photos afterward. One thing I learned was that space suits weigh almost three hundred pounds, which is about ten times more than I would have guessed. But then again, if I was in charge of designing space suits, they’d be about as useless as the ones in “Nude on the Moon”, so it’s not like I was making an educated guess to begin with. As soon as I asked my question about space suits, I realized I had made a terrible error and wasted an opportunity, so we made sure to get in line for a photo with Mark. When we got to the front of the line, I asked the real question that had been burning in my brain: Do astronauts like ice cream as much as we’ve been led to believe? Because every shop that sells anything even vaguely space related ALWAYS has astronaut ice cream, so are they really super keen on it? Mark then proceeded to blow my mind. He told me that astronauts DO enjoy ice cream, but not the stuff they sell in the stores. That they have super-secret astronaut-only ice cream, and it is transcendent. WHAT?! I hope it’s not too late for me to sign up for astronaut school. Hey, I’d love to chat, but I’m running late for the moon!

After that shocking revelation, we made our way to the Atlantis exhibit, which was spectacular. It started with a video played on screens all around you (in front, overhead, on your sides) about the design problems inherent in building a space shuttle, something that was designed to re-enter earth’s atmosphere and land in a horizontal position, able to be reused, unlike any other spacecraft ever built. A video about human struggle and triumph, all set to swelling music. At the end, they showed Atlantis swooping toward the camera, said “Atlantis, welcome home,” and the screen lifted to reveal Atlantis behind it in the same position and I burst into tears.

…I don’t think they let crybabies be astronauts.

Look, you watch it and see if you can handle it any better. It was an extraordinary experience, a moving display about humanity reaching toward something greater than themselves, and a fitting tribute to an important part of history. “Oh, that space shuttle is so fake. Look, you can see the string.” Inside the Atlantis display, they have a ton of different artifacts, replicas, and simulators. My favorite part, aside from the shuttle itself, was the sign describing Personal Pocket #2. Astronauts could carry ANY ITEM that would fit inside, and yet they mostly used it for pens. Pens. Is that the limit of your imagination, astronauts? What in the heck do you keep in Personal Pocket #1, and why don’t they talk about that? Is that your ice cream pocket? THE WORLD DEMANDS ANSWERS.

To test our astronaut readiness, we went on an important space mission which involved testing our claustrophobia.

To get down from that area, they have a giant slide that I wanted to slide down so badly, but a supervising employee told me that it was for children only. Wait, you’re telling me that it was ok for me to cram myself through a relatively small plexiglass tube that hung out in the open, but that an enormous slide that was at least 12 feet wide couldn’t handle the weight of my ass? In protest, I sat down on the ramp intended for adults to walk down and pulled myself down using the handrail as though it were a terrible slide. This is what happens, NASA. This is what happens. End slide age discrimination now! “The exploration of space will go ahead, whether we join in it or not. And it is one of the great adventures of all time, and no nation which expects to be the leader of other nations can expect to stay behind in this space race. We mean to lead it, for the eyes of the world now look into space, to the moon and to the planets beyond, and we have vowed that we shall not see it governed by a hostile flag of conquest, but by a banner of freedom and peace.”

They are serious about wanting to put a human on Mars within the next 15 years, and it’s possible that with Curiosity already in place, that we would be able to watch the astronauts descend. Nothing on Earth will stop me from watching that broadcast. So help me god, I’ll even subscribe to cable.

Buc-ee’s, a friend to all travelers in need

3 Comments → Shut up! And another thing: how come I can’t get no Tang ’round here?