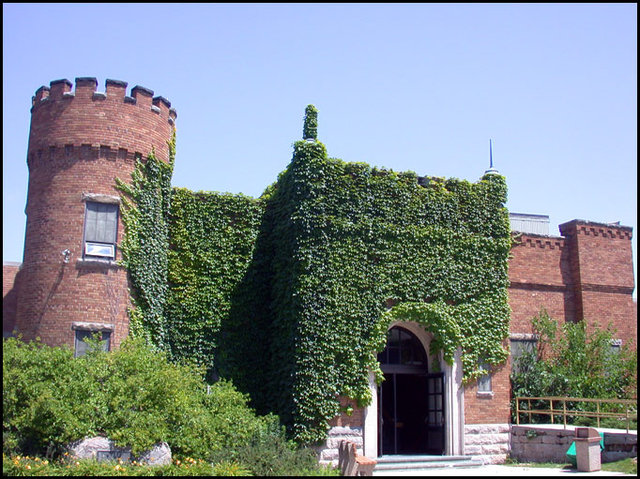 On the morning of the fourth, Lesley and I decided that the best way to celebrate our freedom whilst the sun was shining would be to poke fun at the captivity of others. Thus, our course was determined, and we made our way to the Racine Zoo. The last time we were there, we were attacked by a tiger, and I was molested by a camel. If this experience was to live up to its predecessor, the animals had their work cut out for them. Luckily, they all had can-do attitudes. The Racine Zoo is no longer free, but a big flashing smile at the entry gate and a suggestion made that perhaps I could appear to be under the age of 15 was enough to get me in for half price, saving myself a grand total of two dollars. Go ahead and mock me. It’s ok. The two dollars isn’t the point. The point is that I can bend retail workers to do my bidding. THAT is true power. First stop was the Castle of Monkeys. Since today is Monkey Tuesday, it feels right and natural to talk about monkey antics today. At night it turns into the Damn Spooky Castle of Monkeys, and I hear Skeletor takes up residence there. I’m fairly certain that this is the same monkey that looked so concerned a few years ago after Lesley made a face at him. This time, he kept waggling his eyebrows suggestively at her and clutching at the cage in a “Hello? Let me out, baby! I love you! Don’t you love me?” sort of way, and she kept waggling hers at him. While they were waging eyebrow wars, I wandered over and took pictures of the other monkey, who alternated munching on lettuce and sticking out his tongue at me. Lesley snapped me out of my fascination by indignantly shouting “THAT GODDAMN MONKEY IS FLIPPING ME OFF. That nonchalant bastard!” Sure enough, the monkey had enough of Eyebrow Wars and was now very calmly sitting on a rock, flipping Lesley the bird. Realistically, she had no choice but to retaliate. It was a hot enough day outside that many of the animals were hiding out in whatever shade they could find. We only got a glimpse of the lions, the tigers, and the andean bears, but the alligators  were out in full force. And when I say alligators,  I mean a shit-ton of tiny alligators. It’s as if they captured half of the hatchlings in the New York City sewer system and used them to populate this tiny pool, forgetting that these cute, foot long handbags will eventually grow into surly, 21-foot long cowboy boots. After taking a picture of the peahen below, she hopped out of her enclosure and followed us around the park like a Peahen Lindsay Lohan, begging us to take more pictures, drinking everything in sight, and making pathetic noises when we stopped paying attention to her. The giraffe then tried to intimidate me into not publishing the photograph of his secret rendezvous with with the umbrella, but ever since I discovered that being short places you at exactly the right height for a shockingly perfect nutkick, height no longer intimidates me. The fuzzy and cute, however, makes me powerless.