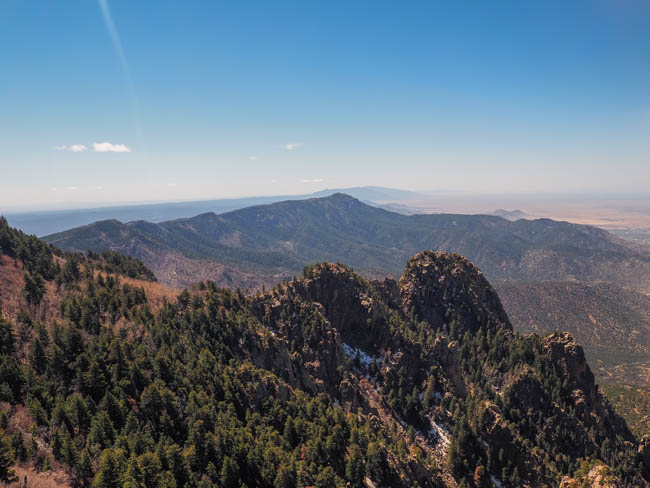 The Sandia Peak Tramway was once the longest tramway in the world. Bumped to third place, it remains the longest in the United States. Construction started in 1964 and was completed two years later, with the second support tower requiring the aid of helicopters to construct. And not a little helicopter aid, either–it took some 5,000 helicopter trips to complete tower two and install the cables, which is probably more helicopters than you’ve ever seen in your life from all sources combined, even if you’re a dedicated fan of Steven Seagal’s oeuvre.  The span of the cables is 7,720 feet, which is long enough that that the cables and even the car itself seems to disappear as it moves away. It’s so long that a trip up or down takes a solid fifteen minutes, so it’s reassuring to know that over the course of their operation, every part of  the tram save for the towers themselves has been replaced at least twice. Less reassuring was our car operator’s description of our current elevation above the ground as a “seven and a half second freefall”, but even that gave me a small assurance: that I’d have enough time to shout “I waaaaaant aaaaa reeeeefuuuuuund” as I hurtled toward the ground. Petty until the very end, that’s me.

Healthier, more ambitious people than myself can choose to hike up or down, and thus tickets are sold at both the top and the bottom station in one way and round trip forms, so I was careful to not lose them in the depths of the abomination I call a travel purse: some forty pounds of anything I might need and no way to recover any of it without five to ten minutes of swirling my arm around in it up to my shoulder. I mean, yes, if I had lost the tickets it wouldn’t have been the end of the world to buy new ones or even hike down (let’s be honest, if you’re going to have to hike one of the directions, down is preferable), BUT then I wouldn’t have had the opportunity to pepper the tram operator with questions–they have a prepared spiel they give on the ride up, but not on the ride down. The kind of hard-hitting questions I’m known for, like ” Has the tram ever gotten stuck? For how long? If there always has to be an operator on the tram, who rides the first one down in the morning? What does that red handle do?” Answers: Yes. Usually no more than 15 minutes but it has been stopped for longer waiting for a car to stop swinging back and forth so it doesn’t risk collision with a tower. Someone actually has to spend the night up in the peak to ride down in the morning, which our (female) operator has never had to do, and for which she’s grateful (“I’m a women’s libber, but you get a bunch of weirdos showing up in the middle of the night.”). It’s an emergency brake that stops the tram completely, requiring the operator to have to strap into a harness and climb outside the tram to manually reset things–which, of course, spurred an inevitable follow up question of “Have you ever had to do that?”. Thankfully, the answer to that one was no, not outside of training. Just picturing being harnessed to the top of a swinging tram a seven and a half second freefall above the ground made my insides roil around a bit in a way that had nothing to do with the rebel donuts crammed in there. Can’t a helicopter do it instead?

2 Comments → Riding in the Sky: The Sandia Peak Tramway