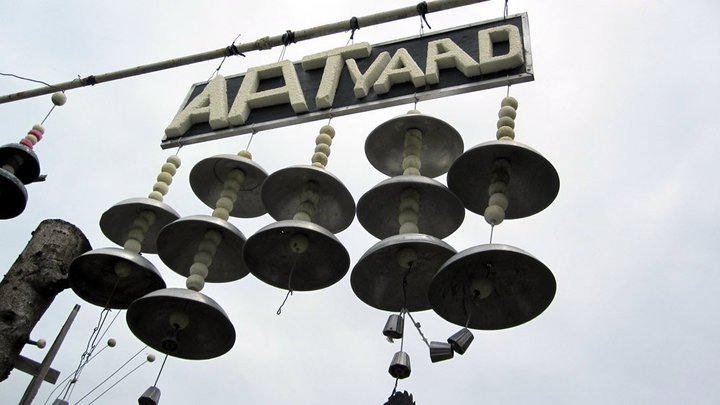 Richard Tracy has been working on an outdoor installment for nearly thirty years, his ArtYard, working with found and repurposed materials. Everything he makes is at the mercy of the elements, and so his pieces are constantly in a state of flux; creation and destruction with the new springing from the ashes of the old. On Sunday, I drove to Centralia to visit Rich and see his creation. There were a several other visitors there, and Rich greeted and spent time with every single person, dragging his reluctant round dog behind him. I liked him immediately. He rounded us up near the entrance and handed each person a tassel and told us that if we particularly liked something he made, we should thank him by hanging that tassel off of the piece, “high or low, naughty or nice”, but that we were not to allow him to see us putting the tassel in place. He explained that because he’s constantly in the yard, he’s lost the ability to see it the way visitors do, and whenever he finds a tassel, he goes silent and contemplates the art, because we’ve then given him the gift of perspective. He brought us over to his first piece, The King & Queen, saying “The Queen is larger because she has more power. We would have fewer wars if we had more queens.” We were then mainly left to our own devices in touring the yard. It’s almost beyond description, almost beyond comprehension. Even photographs do a poor job capturing it. It really must be experienced. Every few minutes, Rich would make the rounds and point out something about the piece we were looking at. He encouraged everyone to look at the space around the art as well, at how nature has incorporated itself in and around the art, making it something more than it was before. The yard itself almost reads like a study in variation and repetition; his fondness for the number five, for circles and spheres, the way the same materials will pop up in similar yet different configurations–what could be a jumble of unrelated items is made cohesive with an underlying theme. As I looked at this wall, Rich approached me and said the head mounted on the right is one of the most-photographed pieces in the yard, the people’s choice. He’s wanted to throw it away many times but has stayed his hand at the last moment because he can’t bring himself to destroy something that so many people like. Mainly, he is disappointed that the face on the right gets so much attention, and the face on the left comparatively little, given that the face on the left is one of his personal favorites, inspired by Picasso’s Girl Before a Mirror. But he said it was ever that way in the art classes he taught as well; he would teach no more than five students at a time, and everyone’s voice was as important as his own. He also described his process for me, and said that he works very hard to get out of his own way when he creates–that he can’t stop and scrutinize every step along the way or he’d never finish anything. He just keeps working until it comes together and feels right. Sometimes it never does reach that stage, but he won’t know until he puts it all together. I think that’s useful advice for anyone engaging in creative endeavors–just keep working, things you were intially unsure about may come together in a way you wouldn’t expect. We parted with him telling the story of the day he watched Mount St Helens erupt, saying that he hadn’t intended to send people off with something bad ringing in their ears, but it was just like being at the dinner table, knowing you oughtn’t say anything nasty, and having something nasty be the only thing you want to talk about. Something else that’s nasty–within five days of Rich’s death, a friend with a backhoe will completely eradicate the ArtYard within a five hour period.   *Edit* As of 2012, the ArtYard is no more.

The Tacoma Museum of Glass