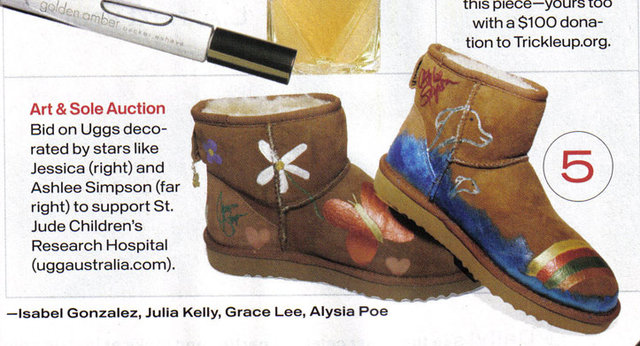 Sometimes I read InStyle magazine. Shut up. This isn’t about my shameful pleasures.

I couldn’t believe my eyes when I saw the ‘What’s in now’ section in the December issue–just when I thought Ugg boots couldn’t get more ugly, walking blonde jokes Jessica and Ashlee Simpson got their hands on some and decorated them to auction for charity.

…they expect someone to buy these? The poor kids who are supposed to benefit from this charity are SCREWED.

It looks like Ugg spared no expense, sending the ‘half a brain between them’ sisters BACK IN TIME to get some puff paint and garish nail polish and then passed the whole project off to their kindergarten selves to decorate. I can’t decide if Ashlee’s pictures a dolphin, or is a cruel depiction of someone with hydrocephalus drowning while struggling in vain to reach the end of a rainbow, whilst Judy Garland chokes out “somewhere just short of the rainbow” inbetween cackles of hysterical laughter.

So in addition to not being able to act, or sing, or dance, it’s evident that Ashlee can’t draw, either–is there no end to the things this girl can’t do?

34 Comments → Putting the UGG in UGLY