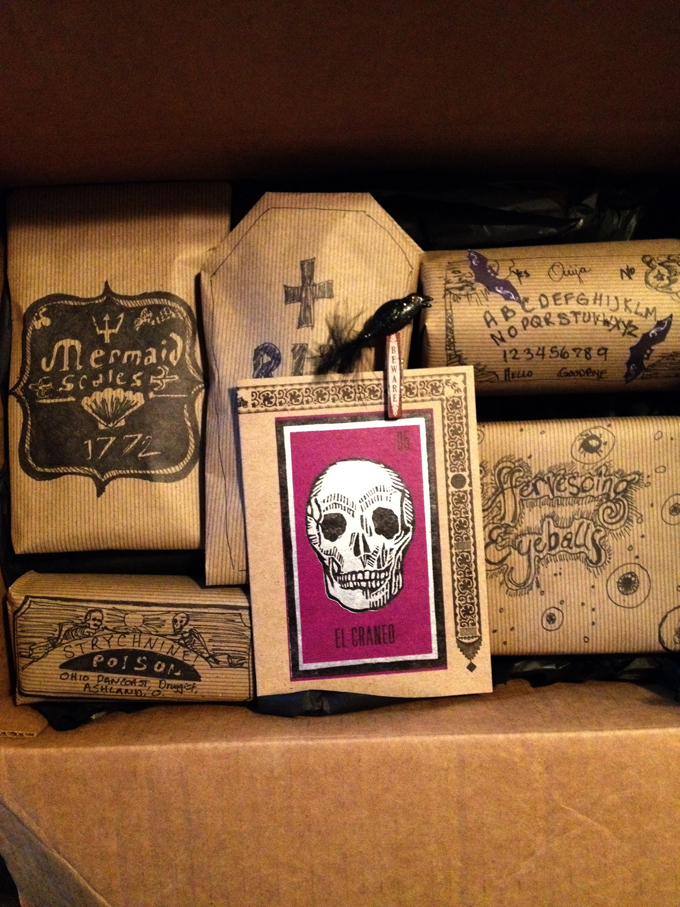 The gift I sent out for the reddit trick or treat exchange. Another satisfied giftee! I didn’t know if this would be a nom or a vom, but I gave it the old college try and was pleasantly surprised. It was like a gently spiced cream soda, not in-your-face pumpkin. I took a cheap-o plastic cauldron and made it completely gross and somewhat dangerous with a number of coats of rust antiquing solution. I’m not 100% satisfied with it, but at least it looks somewhat spookier. I don’t know how many trick or treaters saw this little joke, but it made me happy every day. For party food this year, I went less overboard with homemade stuff–it’s always been too much food in general and absolutely too many sweets and I hated having so much left over/going to waste, especially after so much work. So instead I gave gross names to dried fruits, because, let’s face it, people are still more likely to eat a “swollen spider body” than they are a prune. I thought it would be a great idea to make an eye of Sauron pumpkin, but I didn’t realize until I’d finished that it basically looked like a huge glowing vagina, so that may or may not have something to do with us not getting a ton of trick-or-treaters this Halloween.

As usual, October flew by in what felt like a minute. This year marked the 8th pumpkin carving party that I’ve hosted, and the first that didn’t involve a trip to a pumpkin patch, which worked out for a couple of reasons: one, it was late enough in the season that the pumpkins left in the fields would have likely been rotten, two, it was pouring outside so it wouldn’t have even been fun, and three, it is so much work to organize a party that meets at two different locations, with some people only coming to the second half. I didn’t end up taking many pictures of the various goings-on at the party because, well, basically I am terrible at remembering to bust out the camera when there’s socialization to do.

This is the second year in a row I haven’t made a costume–I couldn’t decide what I wanted to be, and even when I had some vague ideas, I couldn’t work up the motivation to actually make them. I don’t know if it’s general malaise or what, but I refuse to let this particular tradition carry on three years in a row. Next year, I will have a costume and I will go somewhere, damn it, and lord help us all if I decide to go as a classic (ie, nude) witch!