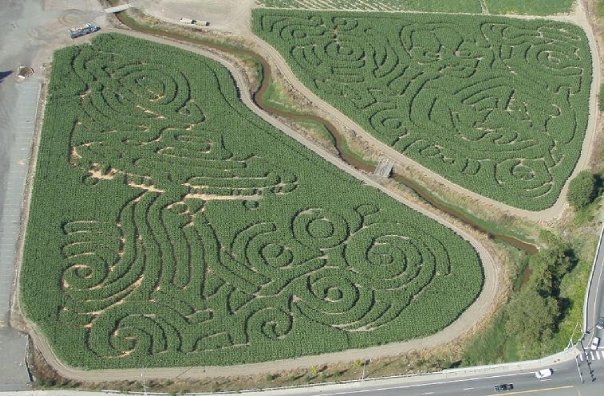 This year’s turnout was great, and the weather couldn’t have been more cooperative–Halloween in Washington is almost always rainy and cold, but I have been fantasically lucky as for four years in a row now, in that the day that I have picked for pumpkin picking and corn mazing has been consistently glorious! We only had enough time to do one maze, so we picked the alien maze and set out boldly, almost immediately ignoring the maps we were given at the start–the logic behind that move being ‘What is the point of a ‘maze’ if you know your location at any given moment?’.

We VERY soon realized our folly, as almost immediately, we became quite lost and wandered around the same section of the maze for quite a while. In a corn maze, EVERYTHING looks familiar, rare is the moment when you can say “Oh, I’ve seen this place before” and that’s typically when you walk past the same punch-station six times in a row. After a time, Aisling, Dick, and Ryan were eaten by the maze monster, and Jim, Tonya, Anne, and I tried to catch up with them, but ended up somehow traveling in the opposite direction. People kept calling and asking where to meet us, and my answer was “…I don’t know, I’m lost in corn. :whimper:”

Eventually, we came to a section that was clearly a side-wall as we could see people and pumpkins on the outside, and we also found a punch-station. This was the point when we decided it was time to take out our map and try to figure the way out from where we were.

Very soon afterward, the four of us were outside waiting by the exit for Aisling, Dick, and Ryan to finish. At one point, I called Aisling, and they had just found a punch-station out near the highway and were themselves trying to figure out how to get out of the maze using the map.

When they finally showed up, the exit is not the point from where they emerged–they had found a spot on a side of the maze where some other group had broken through the corn to freedom and said ‘Fuck it, let’s get out of here’–only now they also had to contend with climbing over the chain-link fence to get back on the correct side of the creek. Outside the maze, we met up with James & Katy, and Nicole and Shana called to say they were running late but they’d meet us at the patch later, so we set off a-pickin’ and a’group-photoin’. Here’s James with the two pumpkins I’d picked out–one for myself and one for Amy, who had graciously agreed to stay at the cabana to decorate for the party as even though I had stopped into the office six times to confirm the time I needed the cabana unlocked for my party, Snoozy Suzy apparently decided it wasn’t a priority to get it unlocked for me on time so Amy and I had barely enough time to haul everything over in the half an hour I had before we were supposed to meet people at the patch. Snoozy Suzy, in turn, wanted to know what time *I* was going to be out of the cabana so she could begin setting up for HER party the next day. Turnabout is fair play, so Amy and I decided it wasn’t a priority for us to leave before midnight, even though the party had ended hours before. So sorry.

I had spent the whole day prior to the party baking–I made some super-awesome pumpkin cupcakes made with fresh-grated pumpkin, popcorn balls (which are a huge mess and I will probably never make them again), ‘witch finger’ cookies, and what were suppose to be brittle bone crackers that ended up just destroying my kitchen and not even being worth a fraction of the effort. We watched movies and carved and listened to music and made filthy, filthy jokes, and this is what we ended up with: Nicole fully intended to place this pumpkin next to her neighbor’s Obama pumpkin, but I have yet to see photographic evidence of this. Tonya (amazoni) carved the three on the right–the one with the smooshy face on the far right makes me laugh every single time I see it.

Anne (poetrix618) made the pumpkin shark with candy-corn teeth–it actually has several rows of teeth for extra authenticity and deliciousness.

Katy (goosezilla) carved the teeny one in front in honor of her dog Phoenix.

James (too cool for an LJ) carved a witch and a skeleton into one pumpkin, representing this year’s Republican ticket.

Katy also carved the goatse pumpkin, which was super-awesome to have up on the porch when random packs of Kent children started wandering around, checking out our work.

Mine is the squinchy-faced, large-toothed one on the left.

Aisling (conceptcanibal) made the one on the right–she had originally wanted to do something different, but when she sat the pumpkin upright, the part that faced up was scarred, so she just followed the scars and ended up with that silly character.

I’m pretty sure Katy also carved the white pumpkin, but I couldn’t tell you for a fact.

Ryan carved the two orange sugar pumpkins, one of which was left behind so I kept it on my office desk for a week.

Dick chose a green pumpkin, the better to turn it into a Green Lantern pumpkin.

Amy’s pumpkin is the one in the back, with a ghost popping out from behind a tombstone.

Jim’s (jimhark) pumpkin, although hard to see, depicts the DOW crash, which he characterized as “pretty damn scary”. What was equally scary was when he was leaving and dropped his phone between the slats of the stairs by the pool, which has been deadbolted and padlocked for the season, with no one to contact to open it up so he could retrieve it. He ended up snagging the pool skimmer and fishing for it between the steps, to the great amusement of everyone who DIDN’T have a phone trapped underneath a bbq grill.

All in all it was a fab addition to my pumpkin carving party tradition and I’m thrilled that everyone got along and had a good time!

I tromped through the pumpkin patch: Rise of the Jack o Lanterns at Descanso Gardens
pumpkin stabbing