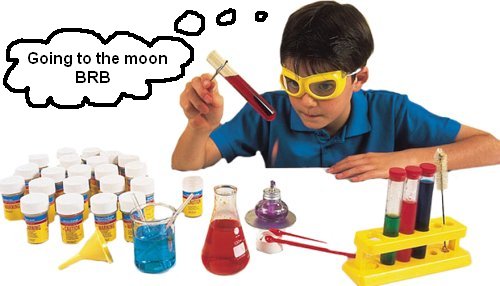 Everyone who stayed home on Friday to watch the mid-season finale of Battlestar Galactica, I envypity you. Because WE watched ‘Nude on the Moon’, a movie where the title succinctly describes the plot. That is, if ‘Nude on the Moon’ HAD a plot. When I see movies this bad, I expect to see two robots and a cheeky lad silhouetted in the lower right-hand corner of the screen.

It’s about 10 minutes of two men doing ‘science’ to get themselves to the moon, which mostly involves random acts of chemistry, 2 minutes of the secretary pining for one of the uninterested scientists, 8 minutes of the most hilarious spacesuits ever, and 50 minutes of topless ladies cavorting in a manner that indicates that ‘Developmentally Disabled Nudes on the Moon’ might have been a more apt title.

Who knew that all it took to go to the moon was mixing a couple of chemicals together while staring pensively and muttering that you’re not interested in a family? If that’s true, I should’ve rocketed off to the moon at some point during 10th grade chemistry. Screw stealing dad’s Playboys, now adventurous pre-teens can use their ‘Lil Rascal Chemistry Kit’ to go to the moon! So, the moon is full of topless babes wearing bikini bottoms that display ample amounts of coinslot (who also don’t talk, and therefore can’t talk back), and speedo-wearing dudes who are so hairy it looks like they might be wearing cashmere sweaters, plus two douchebags in the aforementioned hilarious spacesuits.  Also, the moon has a blue sky with plenty of atmosphere. Also, plants, trees, and plenty of water. Shockingly, the moon’s surface looks just like Florida!

Once our intrepid chemists arrive on the moon, they set out to explore, finding that the moon is full of gold (which they can’t take back, owing to the weight). The gold revelation, however, is completely forgotten once they see boobies, and apparently, so is the dialogue. For the period of nearly 40 minutes that they’re wandering around on the moon, there are maybe six lines of dialogue, consisting of “Hey look at that one” and then ten minutes of dialogue-free booby shots…then another three second shot of one of them saying “Get a picture of that one!” and then another ten silent minutes.

During his time on the moon, Our Hero falls in love with the leader of the Boob Squad, who looks exactly like his pining secretary, minus the giant black mole, complete with the world’s scariest eyebrows, but has to leave her when the fire extinguisher strapped to his back runs out of ‘oxygen’. When he gets back to Earth, he pictures his secretary naked and realizes that he could love her, after all.

Here’s what the Mystery Science Theater guys might have had to say about it:

Long ago in days of yore, it all began with a god named Thor: The Saga Museum